As Georgiana Neverall continues to pursue her plumbing license in the second installment of her mystery series, she does so at a so-so pace.

Having successfully kept her San Francisco secret from friends and family, Georgiana is now faced with the dilemma of having to relive her past when Blake Weston appears at the job site she’s working. With luck on her side, he doesn’t recognize her and she hopes that she won’t be running into him again anytime soon.

But, Pine Ridge is a small town and later that evening while out to dinner with her best friend Sue, Blake comes into the bar with his hosts, the very rich McCombs.

After some snide remarks from Blake, Georgiana tries to dismiss it, but the next day he returns to the site and an argument ensues. A very public argument that puts her in jeopardy when he is found dead the next morning in the moat that‘s being built around the McComb’s property.

Now as the main suspect in Blake’s murder, Georgiana has to decide what information she can release in order to get her name off of the suspect list.

Although the formula is the same throughout the story, it does seem as though Evans did struggle with the installment. Nothing really jumped out to hold your attention.

The characters are well written, but, as in many crimozies, the mother-daughter relationship is strained and you have to wonder if Geogiana’s mother really isn’t one of the shady characters.

Another problem here is Georgiana drags out the San Francisco drama. The reader already knows (or can figure out) what’s going on, but it seems as though every character needs to hear the story, but with new details.

An annoying aspect also is you are easily sidetracked during dialogue exchanges. Rather than complete dialogue and wrap it in a nice bow, dialogue can continue under new paragraphs with different thoughts from the same character. It does throw you off.

On a plus side, the story comes in under 250 pages and is a fast read and does include a few more plumbing tips. 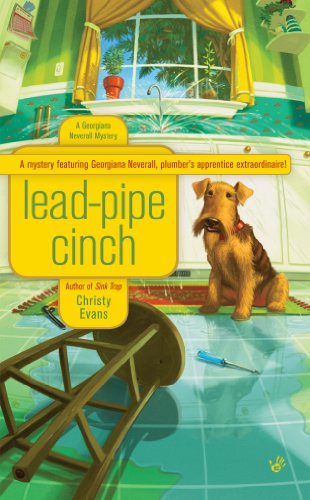