Book Review: Lost Under a Ladder by Linda O. Johnston

After years of waiting, I was finally able to sit down and read a Linda O. Johnston mystery. I had started one a few years ago, but, didn't finish it since I was waiting for another book in the series to come out.

Anyway, I had forwarded a copy of my New Year's superstitions column to her and I thought that there was going to be a novel set around that time. Unfortunately, there wasn't one so I went ahead and started this series.

As with any crimozy, the main character, Rory Chasen, is on a mission and her goal is to hopefully find closure in her fiancé's untimely death. She thinks that she can find the answers in the small tourist town of Destiny, California.

After arriving in town, she and her dog, Pluckie, begin to explore the town when they come to the Lucky Dog Boutique. Inside, she finds the boutique's owner Martha laying on the floor in the backroom with a medical issue.

Rory quickly calls 911 and Martha is saved, yet, she offers Rory a job at the boutique as the general manager just as hunky police chief Justin Halbertson enters.

A Hallmark romance couldn't even compete with this.

But getting back to the story, Martha becomes the prime suspect in for the murder of Kenneth Tarzal the author of the bestselling The Destiny of Superstitions.

This is pretty much where the story ends because as a reader, I was getting lost with the basic plot, even though I loved the superstition angle. The one major problem was whenever Johnston brought up an everyday type of superstition, the meanings were hinted at, but not fully explored. In the town of Destiny, everything revolves around superstitions but not expanded on.

I was also under the impression that Rory's fiancé was killed in Destiny and that's why she had travelled to the small town, but, he had walked under a ladder and was then hit by a car.

Also, during the story, Rory has a job as an assistant manager at a MegaPets pet store in Beverly Hills and she loves her job, so why would she (on a vacation) start working at a small local store? What about her other job? What about her life back in Los Angeles?

These were questions that kept going through my mind since there wasn't a backstory I know in the real world, people do pick up and go, but I couldn't help but wonder that since she comes across as a sane character, what was she really trying to do?

Needless to say, I was quite disappointed and I would have liked to have known more about the secrets of the town. 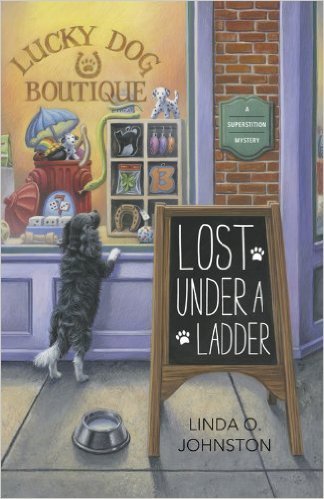 Lost under a Ladder: A Superstition Mystery
Buy Now