Book Review: Many Lives, Many Masters

Many Lives Many Masters

In this book author Brian Weiss, a psychiatrist and researcher at Mont Sinai, Miami, FL., documents the past lives of a patient by using a hypnotic regression techniques. Through regression both doctor and patient found explanations for the patient’s current symptoms but also insights about her close relationships. These regression experiences allowed the patient’s to recover her health and become a healer and psychic. The doctor, on the other hand, was transformed from a skeptical scientist to a scientist who broad his spectrum to integrate soul searching, inner wisdom, and other topics not considered conventional among the scientific community.

In the story, Catherine, the patient, relates under hypnosis the experiences lived in past lives. She recalls passing through at least 80 lives but the book present snaps of only nine of them. Those are the lives the patient more vividly described during the sessions.

She described the experience from the point of view of the woman, man, or child who was living it. Her life experiences varied from being married man or woman, a single person, or an adult with children. In her several lives, she was a victim, a servant, or a fighter. The book is not only about this person lives but becomes an exploration of a variety of aspects of the human condition through various centuries.

The stories related are diverse in context but they also developed in different countries and in a variety of scenarios. Through hypnotic regressions Catherine traveled to Egypt, Switzerland, Germany, Italy, England and France to mention a few places.

Like a time machine, this book opens the window of possibility of encounter of present and past. Interestingly enough, some of the people the patient encountered in her past lives were present in her present life. For example, a past life sister happen to be one of Catherine's current friends.

She lived and died in diverse ways. From each live she learned lessons. The lessons included learning about justice and fairness by experiencing the opposite. She also learned about the use and misuse of power. But she also learned to disentangle the hidden reasons of her anxieties and fears. By living many times and by being able to recall her past life and deaths, she learned not to fear death. The latter, seems to be the most important lesson in this book.

But the book is also the conversion of a skeptical scientist into a more open-minded scholar. With initial help from her patient, the doctor was also able to uncover aspects of the healing process that guided him through unknown territories. He opened his mind not only to better listen to his patients experiences but also to receive through them, 'visits' from masters. Those masters give him insights and lessons about life and about healing [masters are described as entities who speak through the patient in this case]. Later, he also learned to improve his analysis of patients and receive messages using dreams. He also mentioned using other techniques such as meditation to work with his subconscious mind.

The messages he received were initially about healing but later expanded to cover future course of humanity [link to his other books]. Among the messages he received was that humans lack the balance to live in their surroundings. Humans, he says, need to take lessons from other species and the way they live. Balance and harmony the author says are the foundation of wisdom.

Yet for a human to be wise, patience has to be learned. Wisdom is acquired very slowly. First, knowledge learned by conventional ways needs time to become emotional and subconscious. And second, knowledge needs to be applied to become permanent. This explains why 'many lives and many masters' are required to help the transformation of humans to wise beings.

Brian Weiss argues that when people do not live in a compassionate, egalitarian, and loving ways, they are not expressing their best. When people behave in such ways, they incur in debts that need to be paid by learning more lessons. If an individual don't pay debts in one life those debts are carried forward to other lives. Weiss suggests to follow the messages passed by old sages over the centuries, that is “ we need to fill the heart with love".

But how one fills the heart with love? By expanding the seeds of love through charity and kindness. By practicing being a pure loving being. By living simply, and by ridding the self of fears. By accepting the immortality of the human kind. He says that during altered states of consciousness, people could reach states of loving with the purity of one's heart.

Altered stated of consciousness can be achieved in a variety of ways. Some scientists study such states in people who practice meditation. But many recognize that such states can be induced by e.g. hallucinogenic drugs. Yet, recently, scientists such as Jill BolteTaylor (neurologist), have reported that minor changes in the human brain such as those produced by stroke can also induce states of oneness with the world (see her book My stroke of insights).

The abilities of the human brain have only been grasp up to now. Behavioral, Natural Sciences, Neuroscience, Psychology and Psychiatry have yet a lot to learn about the human and other animal brains. Hypnotic regressions, the way suggested by Dr. Weiss as a window to explore more aspects of the subconscious and learn from the self maybe only a tiny window to that knowledge. 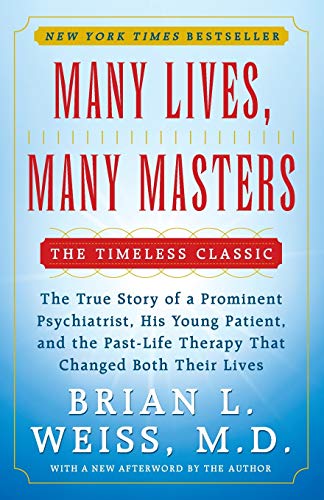 Many Lives, Many Masters: The True Story of a Prominent Psychiatrist, His Young Patient, and the Past-Life Therapy That Changed Both Their Lives
Many Lives Many Masters By Brian Weiss
Buy Now