Book Review: Nightmares Can Be Murder by Mary Kennedy

At least once or twice a week (if I’m having a good nights sleep) I tend to have some odd and strange dreams that pretty much stay with me during the day. Thankfully, I don’t have the typical “nude in public “ dreams.

Enough about my disturbed sleep cycle, but haven’t you had a dream that you’ve tried to analyze or one that you swear was real?

Well, in the start of this series, a select group of women get together to discuss and analyze their dreams.

Taylor Blake heads south to Savannah to help her sister Allison with her new candy store and finds herself in the middle of the Dream Club meeting.

Over the years, Taylor has forced herself not to dream due to night terrors and she doesn’t believe in the interpretation of dreams, but agrees to stay at the meeting.

At this particular meeting, Persia Walker tells the grou (in grim detail) the murder of a man with dark hair. She remembers his body laying on the floor, loud Latin music blasting from inside the building, candles and broken glasses next to the body.

The next night, dance instructor Chico Hernandez is found across the street in his studio dead.

After an emergency meeting of the club, they decide to concentrate on Chico before they fall asleep in order for them to dream up clues for the identity of the murderer.

When Allison becomes the prime suspect, Taylor has to try to prove her innocence with the help of her former boyfriend, Noah and investigative reporter Sara.

With suspects galore, will the Dream Club be able to put the pieces together and solve the crime before another murder is committed?

Kennedy has created a lukewarm start to what promises to be a good series. The plot is original and fresh, but the story is bogged down with too many characters. Many times I was confused as to who was doing what.

Another problem was the first chapter begins with “June 2 8:00 p.m.” I was fine with this since we were given a frame of reference, but the other chapters aren’t identified which adds some confusion as to how much time is elapsing.

Because of this, a few pages in, what should be referred to as Saturday, becomes Friday night again and Taylor and Allison order a vegetarian pizza, only to have a mushroom pizza a page later. Thankfully these were two errors that really didn’t have a huge impact on the story.

If you’re a fan of Denise Swanson and her Dime Store Mysteries, I think you’ll like this series, especially Allison’s candy store.

Allison’s store will undoubtedly bring back youthful memories and instead of recipes the end, Kennedy has included some common dream meanings to help you analyze your dreams. 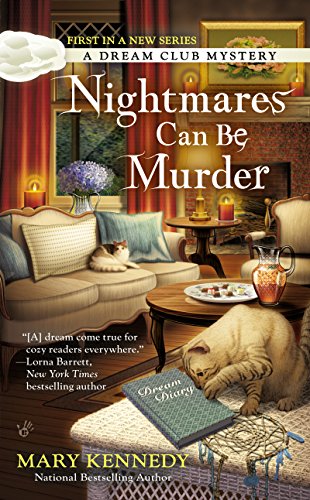