Book Review: Played by the Book by Lucy Arlington

As the Novel Idea Mysteries continue, its safe to say that the series has not yet run out of steam.

Literary agent Lila Wilkins has been branded a murder magnet by a few residents of Inspiration Valley, and it seems to be true as a skull is unearthed while some bushes are being dug up at her home. Lila had planned on creating a garden oasis but when she is “volunteered “ by her boss, Bentley Burlington-Duke her plans were drastically changed.

Of course Bentley isn’t too happy that Lila won’t be representing the agency during the annual garden walk due to the find of the skull, but she still has to help plan a book signing and dinner for up and coming television gardener, Damian York.

Damian, a local boy, is excited about returning to his hometown since he plans on building his dream home and gardens. That is if Grant Walker sells the land to him following the murder of his stepmother, Fannie.

With the murder of Fannie, the field is wide open to suspects hoping to win the annual Van Gogh prize for gardening.

While Lila’s love life is hanging by a thread, she must figure out who the skull belongs to and the connection it has to fellow agent Flora Merriweather.

As in the past, there isn’t a lot of suspense but the reason that the series is successful is that the characters are easy going and they don’t take themselves seriously. It’s more of a casual read more than anything.

In a way you can kind of predict the story and for this next to last installment, I did figure out who the murderer was and I wasn’t surprised.

As I prepare to start the last entry, the story (as in the past) is set up in the current story and of course there will be murder and mayhem at another event sponsored by the Novel Idea Literary Agency. 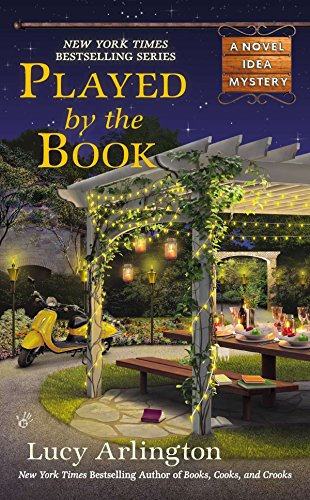 Played by the Book (A Novel Idea Mystery)
Buy Now