“When Jack St. Bride came to Salem Falls, no one knew that the former girls’ prep school teacher was destroyed when a student’s crush sparked a powder keg of disturbing charges. Seeking a fresh start, Jack quietly slips into his new role at Addie Peabody’s Do- Or-Diner — and Addie herself makes a sweet and surprising connection to this unassuming man. But as Addie opens her heart, a quartet of teenage girls maliciously targets Jack with shocking allegations. Now everything— Jack’s future, Addie’s happiness, and the verdict in a “he said, she said” courtroom battle— depends on unearthing the truth.”

Is the book well written?

Yes, not many books accomplish a devils advocate position for a story without simultaneously creating a villain you want to hate. You find yourself wanting to understand, even if just a little bit, the actions taken by some of the characters in the book.

Is it an easy read?

Yes, the story is written in a way that the story comes to life off of the page. While the story is multi-layered, it is not hard to follow, and its subject matter is applicable for teenagers and older.

Is it a page turner?

Yes, this book forces you to put yourself in the shoes of the characters, and question what your own next actions would be. You want to know what the outcome of the conflict of the story is going to be, and it keeps you coming back for more.

Addie Peabody is a small time gal who owns the local diner with her father. Being in the right place at the right time Jack walks into the small town diner and lands a job as a dishwasher; the decision to give the man a job, is one that will change their lives in a whirlwind. The stranger is educated, or at least it seems that way since he knows the answers to every Jeopardy question that comes up on the TV, and yet down on his luck. Addie's quick thinking decision to hire Jack as an act of faith in everyone deserving a chance to start over- is where the story of Salem Falls begins.

Needing both a job and a place to stay, Jack works at the diner and eventually accepts the offer to take a room with Addie’s father, in the apartment above the diner. Both broken in spirits, and by life, Addie soon finds herself falling for this man in a way she has literally never fallen for any man before. Amidst the euphoria, and angst-like anxieties that come with falling in love for the first time, Addie’s world comes tumbling down with a few spoken words about Jack’s past.

Can you believe someone you just met, when they claim they are not guilty of a violent rape, on an underaged girl? Do you believe someone who says they did small time for something they did not do? What if something in your gut is pulling on you to find out more, telling you that all is not as it seems, and perhaps this person MAY be telling the truth? Can love see through to the truth in a soul? Can it allow you to believe the man accused for a second time of a same crime? Can you stand next to a loved one, that whether guilty or not guilty of the crime at hand, is considered a monster in society to begin with?

When the story of Jack’s past comes to light, the town turns on him, and he is forced to adjust to a new place as a societal leper. It’s seems as though Jack would have taken the hit with no fight, if not for Addie, she makes him want a better life. He tells her the past, and his side of the story, and Addie finds herself between a rock and a tough place. Addie knows not to discount the story of an accusing girl, who has come forward about a rape, because unfortunately she has her own demons surrounding the subject matter. Addie knows first hand that the choice to come forward and press charges, or accuse the aggressor, in and of itself is one that is so difficult that most girls choose not to do it.

This book tackles the idea of rape as a crime, which OF COURSE it is, but this book brings you into a courtroom with the accuser and the defendant. The story is a salacious one, of right and wrong, and all not being what it seems. It is unique because it requires that the reader consider that sometimes the system doesn't work the way it was meant to. In a “he said, she said” case, with the subject of violent rape on an underaged girl being the center of the show, it can be a dangerous thing to make the wrong decision.

The small fictional town of Salem Falls operates similarly to, and is actually a quite accurate description of many small towns in NH, I should know because I live here. The ‘collective opinion’ mindset on a situation at hand, is a non-fictional phenomena, that seems to occur in small towns all over the country. None of the characters are perfect townsfolk, but none of them are outlandishly unbelievable, and all of them are able to contribute to the story at hand. The love story that lies in the middle of these criminal accusations, is the story of Addie and Jack, but their story simply acts as the eye of the hurricane. The town of Salem Falls, including all of the people that live in it and the story unfolding there, is what keeps you reading.

Anything in the range of a B in my ‘readers grade book’, is a quality piece of reading that I genuinely enjoyed, and would recommend to others to read. Anything I deem to be within the range of an A, is an above and beyond quality work, that leaves you a better person for having read it. Rarely will I choose to write a review on a book that got lower than a B- in the book. B- would actually be a grade I would give to a very good read, that I enjoyed and would recommend, but probably wont read a second time. If I ever did choose to review a book that got a C range grade though, it is because there was an aspect of the book I still enjoyed fully, regardless of the quality of the story as a whole. Once again, this book earned a B in my book, and it would be a great book club choice for a group of friends. 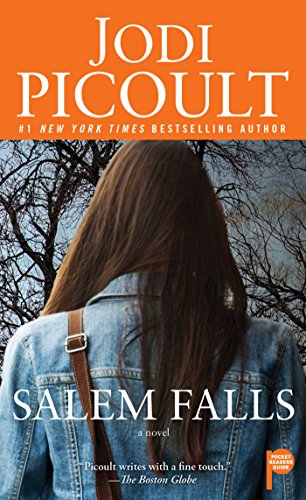