One of the good things about crimozies is no matter how bad you think your life is, there’s the hope of starting over.

And Georgiana Neverall is no exception.

Gerogi has returned to her hometown of Pine Ridge, Oregon after leaving a successful career in San Francisco. Her departure is somewhat of a mystery in itself as she has not discussed it with her mother or closest friends.

Upon her return to Pine Ridge, Georgi lands a job as an apprentice plumber and while on an assignment fishes out the brooch of Martha Tepper, from a bathroom in the abandoned warehouse Martha owns.

Martha has supposedly moved to Arizona and Georgi finds it strange that the beloved librarian left without the brooch. She was always known to wear it and would never go anywhere without it.

Georgi’s list of suspects begins to grow as she gets closer to the truth as to what happened to Martha.

Although the story does have some parts that do drag, overall this is a very quick read coming in at less than 250 pages and offers some plumbing tricks along the way.

The characters are well written and since we don’t know exactly why Georgiana left San Francisco I’m hoping that the mystery will be solved before the end of the series.

If you’re looking for something fun and fast, take a trip to meet up with Georgi and friends. You’re in for a good time. 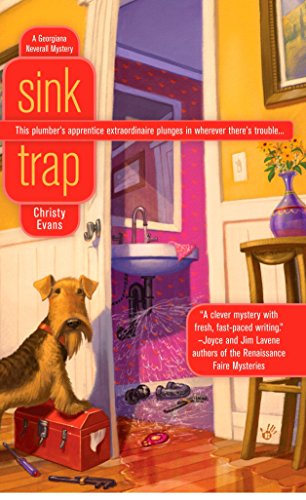