As summer approaches, the one thing everyone looks for in relaxation is sitting on the beach or on the deck of a pool immersed in a good book. Generally, it's a trashy novel, but this summer an action/adventure novel should be on your reading list.

Shaw isn't a bounty hunter or private eye, but he makes his living by seeking out rewards that are being offered for people who are missing, whether it be a task force or private citizens.

After obtaining an envelope from the Cal Sociology Department (from fifteen years earlier) Colter sits down in his RV to look into events from 2004, when he's interrupted by a phone call from Teddy and Velma Bruin. They let him know of a missing girl in the Bay Area and after debating he decides to meet with the missing girls father.

Shaw then meets with the girl's father, Frank Mulliner and learns that his daughter, Sophie, disappeared two days earlier following an argument. After hearing Frank's story, he agrees to take the case.

While using his survivalist upbringing, Shaw goes to the last place where Sophie was last seen and blends in with the crowd at the Quick Byte Cafe', where he sees a poster for the missing girl. Most of the patrons inside are in their own worlds as they're busy looking at their laptops or other devices.

Shaw meets Maddie Poole, a young woman who makes a living as a professional gamer and he learns of a game called The Whispering Man. Whoever kidnapped Sophie has brought the game to life during an international C3 Conference, introducing new games, devices, etc.

By the time Henry Thompson (a blogger and LGBT activist) disappears, Shaw is sure that the kidnapper is bringing the game to life, but, the local authorities aren't interested in his theories since they did suspect him in Sophie's disappearance and when a very pregnant Elizabeth Chabelle disappears, the authorities know listen to him as The Whispering Man has come to life.

But, in trying to solve the disappearances, Shaw is also fighting the demons of October 5, 2004 and the death of his father, Ashton. Was his death an accident or was it murder?

The time period for the book is from June 5 to 10, 2019 (I guess you can include the fourth since Shaw does mention the day he had retrieved the envelope) and it's also broken down by levels of The Whispering Man so once the story begins you're already in level three of the game.

This is a fast read with short chapters and before you know it you're taken on a rollercoaster ride of twists and turns.

However, I admit that I did lose interest near the end because during this time period it's supposed to be Sunday and one of the suspects is "supposed to be in school."

Whenever I come across a slight error like that, I do want to throw the book across the room since it shows laziness on the part of the editor or proofreader and trying to get back into the story makes it harder.

At some point though, Colter Shaw will be back, but in what capacity? 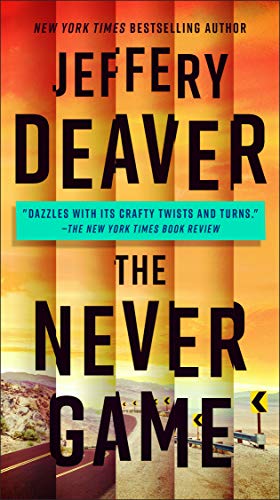