The Palestine Problem is a book written by Richard Williams-Thompson, published in 1946 by Andrew-Melrose, LTD. This book is a rare find, and a good read for those who are interested in the history of the Israel-Palestinian conflict. This book was written in 1946, so the history since then is not included. But, I recommend it anyway as a great starting point, as it examines the history of the peoples involved, going back to ancient times, and takes a contemporary look at the immediate post-War state of Palestine.

I found this book in the charming Hampden bookstore, Charlotte Elliot and the Bookstore Next Door, which has a treasure trove of rare and collectible books. The eclectic store is an explosion of books, ranging from centuries-old classics to new bestsellers. The owner, Charlotte, and her partner, Fred, are helpful and friendly. They know their collection like the back of their hand and they can help you find just about anything. I literally spent 2 hours in this store browsing their impressive collection. If you're in Baltimore and like books, this place is a must-visit.

Now, let's get into the book.

At just 123 pages, it's a short read, but not a quick read. The subject matter is complex, and its storytelling dense. Williams-Thompson, a British Lt. Colonel, states at the outset that his book was written for the British layperson to help them understand the conflict better.

That said, he spares no details. The book begins with a hefty examination of Palestine's history that is far too complex to detail here. But one very important point from the prehistoric period is that the Hebrews began to occupy the territory in the Second Millennium B.C. This group would splinter into several subgroups, of which one became known as the Jews. In A.D. 132, the Romans, who ruled the territory at the time, destroyed Jerusalem to put down a Jewish revolt. The Romans put many Jews to death or took them into slavery. Few remained in the territory - most fled, which led to the spreading of the diaspora all over the world. Coming into modern times, the country was under Turkish rule prior to the British gaining the mandate over the territory in 1918. Prior to Jewish immigration into Palestine beginning in 1855, Palestine was an overwhelmingly Arab country. It goes without saying that the persecution of Jews in Europe during the reign of Hitler was a huge factor in Jewish immigration to Palestine. But even before that, going back to the Crusades, Jews had been subject to oppression, such as being forced to live in ghettos, or wear identification badges, in various places in Europe.

In examining both sides of the conflict, Williams-Thompson looks at the Arab case first. This book was written in 1946, and this chapter really shows it, with its unabashed description of Arabs as "backwards" and "dirty". He explains how Palestine was governed by the Turks for hundreds of years, before Jews began to immigrate to the country, right around the same time that it came under British rule. He states that all these sudden changes have stunned the Arab, which he describes in the following passage:

"Then suddenly his country was freed from his Turkish oppressor. Instead of gradual emancipation at his own pace, the Arab was suddenly thrown face-to-face with, and in actual opposition to, an influx of a race of highly cultured and intelligent people - the Jews."

In addition, his country began to be governed by the representatives of a highly civilised Western power - Great Britain. In other words, a backward race, with all its antiquated ways of living, its complicated religious rules, was brought into sudden contact with the most modern way of life."

Williams-Thompson explores the background of Arab life in Palestine, including rivalries between powerful families, which has hindered Arab unity in resisting further Jewish control. He offers criticism of the Arab strategy in maintaining control of the territory, saying that because the Jews are far more advanced, and have far more wealth, the Arab would do well to work with the Jews and genuinely seek to live in peace. He cites the medical and educational advancements that the Jews brought with them as a reason why the Arabs should be more hospitable to the Jews. He also mentions the White Paper, which was a 1939 agreement by the British to limit Jewish immigration to Palestine. The White Paper was ultimately not honored, as the British government raised the figure caps after domestic public pressure. He criticizes the Arabs' refusal to accept the original White Paper because they didn't think it went far enough in limiting immigration. He advises them accept the slightly higher figures than those outlined in the White Paper as a gesture of partnership with the British, who will ultimately have the final say in the matter.

The author also states that he does not believe the Arabs are ready for self-government, which isn't necessary a point in support of the Jewish case, but rather, support for the British mandate to continue in the country.

Williams-Thompson starts out the chapter, "The Jew", with a profile of the Jews in Palestine. He begins by explaining the merits of Jewish settlement. He mentions that the Jewish quarters are more advanced, and more western-like, with shops, restaurants, well-furnished libraries, and other modern amenities. He compares the more modern architecture found in the Jewish quarters to the mud huts of the Arab quarters, and the overall wealth and success of the Jews to the abject poverty of the Arabs. Because of their western-like society, he feels more connected to them than to the Arabs. He also commends the Jewish Brigade for delivering a decisive victory for the Allies on the Italian front of the war. He states that his first impression, after having been impressed with the advanced Jewish society, was that the solution to the Palestine problem was simply to remove the Arabs. But he decided to keep an open mind to both sides and continue to investigate the issue, coming eventually to the conclusion that he supports a modest Jewish presence in Palestine, which was at that time termed the "National Home." But he does not support the kind of growth advocated by those further to the right. In fact, he supports a fairly limited presence. To condense his major arguments down to a few sentences, he comes out on this side because he believes:

1) The Jews erred strategically by not compromising with the Arabs. He thinks they would have been, in his words, "easy meat" for the Jews to bargain with, since they are so much more impoverished than the Jews, and that the Jews threw away this opportunity.

2) Zionists (people who believe that Jewish settlement of Palestine is a religious right and duty) claim that the irrigation of the largely uncultivable land of the country could allow absorption of two million to four million people. But this would require feats of engineering that would be very expensive, complicated, and not even assured to succeed. The real amount of new people the country could support, given that the Jews already own so much of the cultivable land, is far less.

3) The country is not self-sustaining, and the economic burden of it falls on the backs of British taxpayers.

4) The author is skeptical that in the post-war era, European Jews would even want to emigrate to Palestine. He believes that the two million figure cited by Zionists as what the country could support if the land is exploited to its full potential, would never be achieved without compulsion. He believes that many more would prefer to emigrate to the US instead.

One very salient point that the author makes to support his position comes from a letter which was published in The Times, from which Williams-Thompson placed an excerpt to make his point. In it, the letterwriter accuses British sympathizers of the National Home of being motivated by an underlying anti-semitism: that is, they favor offloading the Jews onto another nation. In the post-war period, displaced victims of Nazism were left refugees in Europe. No doubt that some European nations saw in the National Home a way to avoid taking in these refugees. He also calls out the oppression of the Palestinian Arabs by the Jews, and mentions that his sympathy for the Jews' sufferings in Europe does not allow him to give them pass for this. At the close of this chapter, Williams-Thompson comes down as firmly anti-Zionist.

After examining both cases, Williams-Thompson proposes what he believes would be the best solution. It should be mentioned that earlier in the book, he proposes mixed schools with both Jewish and Arab pupils, where English is taught as a common language, as a start in the right direction. He rejects the two-state solution in favor of one in which the British firmly enforce the 1939 White Paper, capping the total population of Jews in Palestine at 600,000, and the opening of other westernized countries to European Jewish immigrants. This includes the US, Australia, New Zealand, Canada, and South Africa. He also calls for immediate improvement of the conditions in Europe for the Jews, so that a number can stay and continue to contribute their talent and innovations. Finally, he proposes that Palestine must transition into being a self-governing country.

Despite Williams-Thompson's racism in referring to the Arabs as 'backwards' and 'dirty', I found this book to be an incredibly good read, and I found Williams-Thompson to be relatively progressive for his time. He calls the issues as they were at the time, and even to a great extent today. I learned a great deal about the conflict and the people involved in the conflict. I highly recommend this book if you are interested in learning more about this conflict. Though it also needs to be followed up with more modern sources, as a lot has happened since this book was written in 1946. 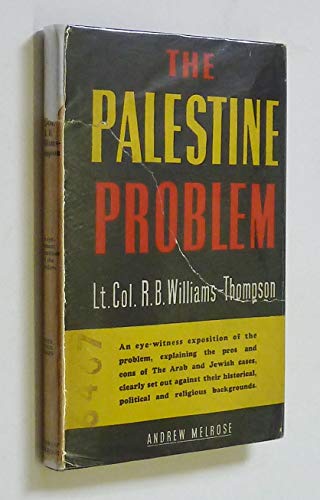