The Rosie Project is the the debut novel of Australian novelist Graeme Simsion. The novel was published in 2013 and have sold more than 3.5 million copies worldwide. It was named Book of the Year for 2014 by the Australian Book Industry Association. The novel was followed by a sequel, titled The Rosie Effect which was released in 2014 and was followed in 2019 by the third and final book in the trilogy, The Rosie Result. 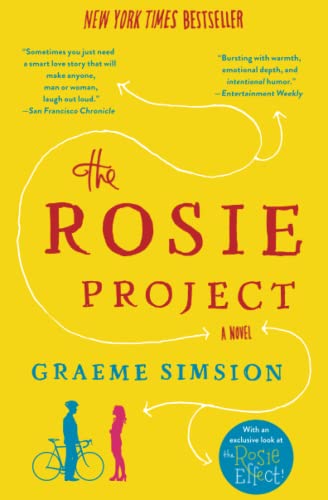 You considered me as a partner?’ ‘Sure,’ she said. ‘Except for the fact that you have no idea of social behaviour, your life’s ruled by a whiteboard and you’re incapable of feeling love – you’re perfect.

The novel centers on genetics professor Don Tillman, who struggles to have a serious relationship with women. He measures and evaluates life all the time. He is very organized, has a rigid meal plan and has lobster in his bathtub every Tuesday night.With his best friend and womanizing colleague Gene and his wife Claudia, Don comes up with the idea of the Wife Project-a questionnaire that would help him in finding the perfect mate. He devises a questionnaire to assess the suitability of female partners. But he fails to find a satisfactory woman and alienates many potential candidates on the basis of the questionnaire.

Gene introduces him to Rosie, a bartender does not fit many of Tillman's criteria and so he quickly eliminates her as a probable mate. But still Don is drawn to her and even agrees to help her find her biological father, a man that her mother slept with after a graduation party. He terms it as the "Father Project".

Will Rosie find her biological father? Will Don find a perfect soulmate in Rosie? I won't spoil the book for you by narrating further story. You will have to read this hilarious and sweetly unique novel to find the answers.

“But I’m not good at understanding what other people want.’

‘Tell me something I don’t know,’ said Rosie for no obvious reason.

I quickly searched my mind for an interesting fact.

Sheldon Cooper in love...If you have watched 'Big Bang Theory' then you will understand what I mean. And if you are a big fan of Sheldon like me then I am sure that you will like this book.

The Rosie Project is a fun, quirky and entertaining love story. It's laugh-out-loud, funny and unexpectedly touching. Don is a wonderfully offbeat and idiosyncratic character. Rosie serves as his perfect foil. Both the characters are pitch perfect.

The story had a lot of twists and turns with a few predictable parts. I thoroughly enjoyed the journey of Don and Rosie which led them to discover more about themselves. It was hard to believe at first that these two seemingly opposite types could fall in love and have a chance for happily-ever-after but by the end, you desperately wish that the two of them end up together. The novel is a entertaining tale of one man's journey to find love and discover some truths about himself.

I think one of the reasons the story is so appealing is that it's written from a unique perspective. This is one of the few romantic comedies written by a man and from a man's perspective.

This was a great read with really quirky and adorable characters. The writing style is simple yet engaging. It's hilarious and heart warming. If you are looking for a light, fun read then this is just the right book for you. Highly recommended!

“A woman at the rear of the room raised her hand. I was focused on the argument now and made a minor social error, which I quickly corrected. “The fat woman—overweight woman—at the back?”

Graeme Simsion is an Australian author, screenwriter and playwright. Before becoming an author, Simsion was an information systems consultant and also co-authored the book Data Modelling Essentials.

Bill and Melinda Gates: A Conversation with Author Graeme Simsion