The Trouble with Magic. A Bewitching Mystery series review.

The Trouble with Magic, by Madelyn Alt

I do not consider this book cozy enough, so I won't be reading or reviewing any of the others in this series.

There is a firearm involved, for thing.

Play Misty Gray for Me

I don't know what it was that made me abandon my usual path to work on that particular October Tuesday. The morning had dawned misty and gray --- my favorite kind --- and it made me groan all the more about heading into the grim Collections job I had desperately come to dread.

I was hooked on those first two sentences.

The Tao of Felicity

A shadow had fallen over my hometown; I hardly recognized it anymore. They say that change is good . . . In the case of Stony Mill, that meant opening our arms to a flood of big-city expatriates who saw my quiet town as a way of building their expensive homes free of the burden of city-sized taxes. . . . Why the interlopers all seemed to feel this town owed them for the honor of their presence was beyond me.

It's refreshing to see these critical comments --- instead of the usual boosterism about how we have to "grow". (Grow what? I want to ask.)

During her tour of the antiques area of Stony Mill --- one of the few good effects of gentrification --- Maggie accidentally falls into a store called "Enchantments" while trying to duck into the doorway to get out of the rain.

Felicity Dow --- the owner of Enchantments --- asks Maggie to work at the store. Maggie accepts, right then and there. She felt the Toad would be firing her anyway, for not calling in that day.

Felicity is a charming, gracious British lady who claims to be a practicing witch.

The Trouble with Magic, by Madelyn Alt

Maggie dislikes her job at the collections agency.

It's probably just as well, because the above - cited abandonment of her usual path was the last straw for her boss, The Toad --- who calls female employees "the girls" --- when she showed up at work that morning ("finally" according to The Toad), citing "car problems" as the reason.

Well, more like --- she got into her car and drove away, not knowing when she would report to work. That's a "car problem", right?

Sadly, on Maggie's first day of work at Enchantments, Felicity receives an urgent phone call which we later learn is from her sister, Isabella. Felicity leaves Maggie in charge of the shop while she drives to Isabella's home to see what the mysterious phone call had been about.

When Felicity gets to her sister's home, she finds Isabella's body at the bottom of the stairs. Apparently Isabella has been murdered.

Felicity is the prime suspect.

Felicity found her sister's body, for one thing. That tends to arouse suspicion.

But, for another, Felicity ("Liss") and Isabella had not been on good terms with each other --- ever since Liss' late husband had an affair with Isabella.

Reserving Judgment on this Series

I think this series might not be right for me, but I'm not sure yet.

I really liked Maggie in the beginning of the book, as I say above. But, as the book goes on, several things started bothering me. Maggie became more difficult for me to like. She becomes a little whiny and dependent as the book goes on. It became boring and dull.

And, there's a male character who apparently is supposed to be attractive and mysterious, but who is an obvious cliché with no personality.

The story takes place in a small midwestern town, where most know each other. In that case, however --- how is it that Maggie has never heard of Felicity or Enchantments before the day she fell in through that door.

Maggie lives in the same building as an old friend from high school.

The two of them love to watch reruns of Magnum P.I.

But, maybe what bothered me the most was the solution to the mystery.

I figured the apparent murderer was a red herring, and the author would provide a less repugnant solution when the time came, but I was disappointed!

It really is that creepy.

Some readers might not be as upset by the creepy solution as I was. Nevertheless . . .

The Trouble with Magic 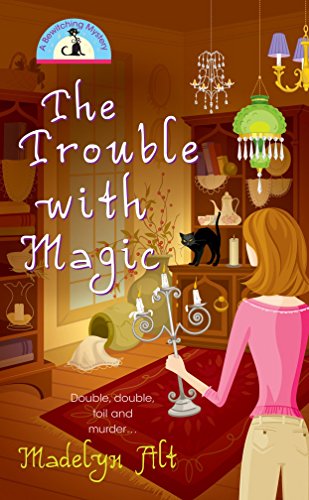 The Trouble With Magic (Bewitching Mysteries, No. 1)
Review, above.
Buy Now

She eventually was cleared of suspicion, and the cop who Maggie thought was questioning her because of prejudice against Wicca --- it turns out he always knew she wasn't the murderer anyway.

He was just trying to protect Felicity from the real killer --- who he knew would be stalking her.

Nevertheless, Maggie had already stopped dating that cop before that anyway. I feel the author is setting us up for some sort of romantic involvement with that "mysterious" guy.

I guess the sequel will tell more about the supposedly attractive, mysterious guy, and get Maggie involved with him, even though he's a total bore.

On the other hand, Maggie is pretty boring herself.

At the beginning of the book, Maggie started out with wit, independence and sarcastic critiques.

Her personality sort of broke down as the book went on.

I'm not sure how or why.