What happens when, as a mystery writer, you come up with an original idea, and it turns into one hot mess? Well, you publish it!

And that’s how you end up in Threadville.

In the series second installment, a year has nearly gone by and Willow Vanderling’s embroidery shop, In Stitches, is the hottest shop in town.

It’s a big day at In Stitches when Darlene Coddlefield comes to pick up the latest embroidery sewing machine that she’s won in a national sewing competition (it’s convenient that she’s a local) but her oldest children don’t like being paraded into In Stitches wearing the clothes Darlene made. In fact, the older children are quite embarrassed and don’t want anything to do with being there.

Darlene just wants to get her prize home in a hurry and later while sewing, the machine kills her (this was the great idea). In a subplot, Darlene is also a scam artist running three non profit children’s charities which have been benefiting her.

From here it’s all downhill. Again.

Once again Willow could be considered a suspect since the machine came from her shop, In Stitches, and she would know a thing or two about the sewing machine since she sells them.

As the story drags on, Willow, along with best friend Haylee, become volunteer firefighters. I know it takes awhile to become an actual firefighter with intense training, but in this small town, if the gear fits and you can pass the written test, then by golly and congratulations! You’re a firefighter!

I think my eyes rolled more times than dice on a crap table in Vegas (per second) and again, I don’t want to rehash the fact that Bolin loves to repeat herself constantly.

How many times did I repeat myself in this review? If you can find it, let me know, because I did it to be facetious. 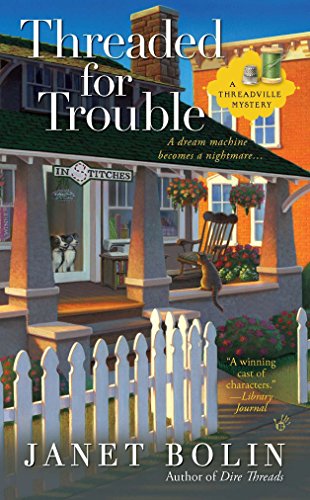