Book Review: Town in a Maple Madness by B.B. Haywood

I can't be sure why it took me a week to read this final installment (maybe because my mind was going in a thousand different directions) but I can close another chapter of series reading.

Per usual, the residents of Cape Willington, Maine are getting ready for a festival. This time it's the inaugural Maple Madness Weekend and is being held the weekend of March 24 to 26. It'll begin with the dedication of a new community center and then anything maple related to follow for the entire weekend.

Although there's one hitch.

The body of Mick Rilke is found floating down the English River and this will definitely put a damper on the weekend, since his death has been ruled a homicide.

Amateur sleuth, Candy Holliday, gets a call from Mick's wife later that day and asks if she'll investigate her husbands death. Candy's not thrilled about it, but "looks" into it like she always had in past murders.

In the meantime, Hutch and Ginny Milbright have asked Candy to their farm since they've noticed some illegal tree taps and are accusing strawberry farmer Neil Crawford of being the culprit.

While out in the forest, Candy comes upon Neil in a boat shack (unconscious) with the knife that killed Mick. Having known Neil for a long time, she knows that he can't be the one who killed Mick and dumped his body in the river. Mick's a bigger guy and it would take at least two people to do the deed.

Soon, Candy begins to start snooping where she shouldn't and while hiding inside an abandoned garage, she's trapped as the killer locks her inside and sets it ablaze.

The question is will she get out alive to solve Mick's murder, or will the series end with her untimely death?

I think the one thing about this last installment was the illegal maple tapping. Who would have known that such a thing existed and I think it would have been much more interesting had the book gone into more information regarding this type of crime. Actually, I would have never thought of this being a crime, nor did I know that sap was such a big commodity.

Again the book wraps up with some themes recipes and why the publisher included the opening to the fifth installment at the end, I really don't know.

But, if you are looking for a long series to read, this should be a good one for you, even though it did have it's ups and downs. 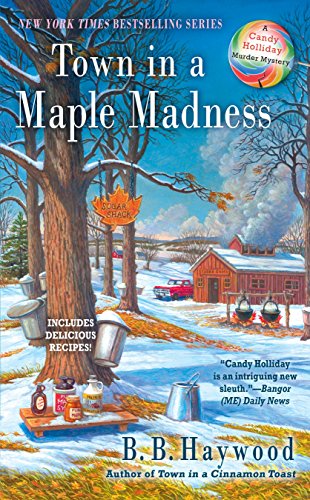