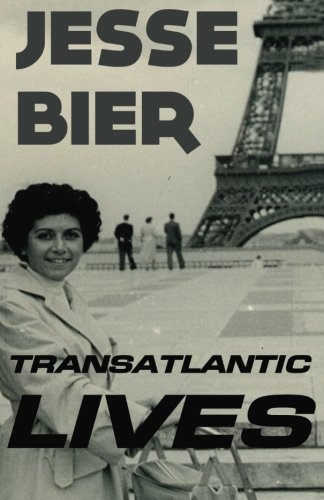 Transatlantic Lives is a non-fiction book published by Inverted-A Press, which is a small literary press run by the hubber Aya Katz. You can also read other books published by Inverted-A Press, such as Portrait of a Lover, Vacuum County, A Thousand and One Stories of Pericón de Cádiz, and part one of Our Lady of Kaifeng. The biography Transatlantic Lives opens in the year 1902 with ethnic tensions in Turkey. A Jewish grandma of the Lahina family hid Armenians from the Turks, and soon after this event, the family immigrates to France.

In the next few pages, we are transported to the year 1914 with another woman from this same family by the name of Madame Esther Doriac, who asks a French official to post a sign in front of their shop informing French citizens that they are also allies of this country. France was at war with the Ottoman Empire during the First World War, so having a connection to Turkey would not be advantageous for any foreigners living in the country. The first few pages of this story bring the ethnic tensions to the foreground, and the opening scenes of this biographical tale pull you into a world most people only read about in history books. The short essays in this biography bring the people of this turbulent era back to life, and many of the day-to-day issues people dealt with then are mundane and relatable events people have dealt with throughout the history of the world.

Next, the story crosses the Atlantic Ocean to America, hence the name of the book Transatlantic Lives, but I had a hard time following the action on this side of the pond, as none of the people captivated me early on. One story about Teddy Roosevelt allegedly untying the young Lucy from a fence and telling her guardian that this was not appropriate way to restrain a child was amusing, but most of the short essays about the Americans require a bit more concentration to figure out where the plot is going. I used to think it was just me if I had a difficult time becoming engrossed in the early pages of a book, but then I realized after talking to other readers over the years that people often have similar experiences. One author I truly enjoy is James Michener, but many of his novels are hard to get into during the first fifty pages or so. This biography felt the same way, except for the stories about Pepee and her family. Of course we want to know about the Americans in the story because this is where the author Jesse Bier grew up, but these tales are just not as engrossing as the Europeans featured in this biography.

The story of the Lahina family in Turkey and later France intrigued me from the start, so I concluded I was just not as mesmerized by the Americans in the early part of the book. I mean who could not help but be intrigued by the story of the peddler Jhora, who wandered around a Turkish village selling cobbled pans to homemakers. Now, that is the type of vignette that captivates me as reader. I can envision Jhora walking down a cobbled street with pans in tow.

Oh yes, and you have to admire eight year old Pepee, who rightfully tells the gossiping women in the synagogue to be quiet. Pepee can be quite amusing when she shares inside jokes with her mother about the overly serious piano teacher, Mlle. Pitou. However, Pepee feels contrite about this behavior when Mlle. Pitou relates the story of how she lost her fiancée during World War I. Pepee is a very astute young woman who possesses a sense of humor, but she also has a maturity beyond her years. Thus, you cannot help but be drawn to Pepee, and want to know more about her.

After I reached the sixty-page mark in the book, the stories from the American side of the Atlantic become a bit more interesting, but these end too quickly just when I become interested in a particular person. There are quite a few people that the reader has to keep track of, and it would have been useful to have a list to glance at from time to time.

Pepee’s story continues to draw me in as each short essay about her allows the reader to grasp a more complete picture of who she was. The math teacher Mme. Alembe had a bizarre penchant for heating her back with a lamp, and you can almost put yourself in Pepee’s place recalling all the zany things your wacky teachers did when you were in high school. However, Pepee’s respect for Mme. Alembe grows when she asks Pepee where she got a stunning brooch. After this Pepee realizes that Mme. Alembe is not just a teacher, but is an also woman who also admires beautiful things. Pepee’s decision to give Mme. Alembe the brooch at the end of the school year was quite touching, and is a lesson for all students about how even the sternest of teachers still yearn for human affection and interaction once in a while. They may be instructors that have to maintain decorum in the classroom, but they are human beings like anyone else. This particular vignette illustrates the transformation of Pepee from a young schoolgirl into a young woman who can observe things about the larger world around her.

I also enjoyed the short essay about how Pepee obtained her education in couture by observing the shop windows in Paris, which was delightful for the senses. Since I enjoy wearing stylish skirts and cute tops, I can identify stylish clothes described in the windows. No wonder people around the world still look to France for their fashion pointers.

The stories go on to cover more tales about various Americans, but I am just not very fascinated by Rudy Stanton and his passion for baseball statistics. The story about Vema’s oddball father was certainly a bit jarring when juxtaposed some of the other more somber short essays about the Americans in the first half of this book. As a reader, I do not want to give too much away, but I do suggest reading this book if you enjoy short essays and vignettes about real people.

The final analysis of Transatlantic Lives is that I was transfixed by Pepee’s adventures from the onset of the book, and it would have been a bit more interesting early on if it had focused on her primarily. However, this is probably just my bias because I wanted to know more about Pepee every time she came up, and she is just someone I could listen to talk for hours if I met her in a café in Paris. She reminds me of women who lived through extraordinary events in history, but who still dealt with the same issues people contend with in 2012. Just because you immigrate several times in your life and live through a tumultuous war does not mean do cease to grapple with everyday issues. I think even some of the stories about the Americans early on in the book illustrate this point. It is quite romantic that Jesse Bier wrote a biographical account about his wife, and for this reason alone I think people who enjoy factual love stories will be drawn to this book. It has a bit of the essence of The Notebook to it, but with true to life vignettes.

Will you read Transatlantic Lives?