As the Cupcake Mystery series continues to grow, there are bound to be a few hits and misses. Unfortunately, this installment does border in the miss category.

In the eighth installment, Melanie, Angie and Tate are headed to Las Vegas where Fairy Tale Cupcakes is opening its first franchise. Melanie is not happy about expanding the business, but has been overruled by lovebirds Angie and Tate,

When they arrive, the couple leaves to explore the city and Melanie meets Holly Hartzmark, the franchisee. As she already has an attitude about franchising, she's even more upset when she discovers that Holly is the headliner at the hotel that they're staying at. Melanie can't figure out how a Vegas showgirl is going to run a bakery and live up to her expectations.

When Tate and Angie don't show up at the location for the bakery, Melanie and Holly are with the realtor and lawyer waiting for their arrival. Since the duo are still running late, the four agree to go into the shop when there's an explosion.

Melanie's attitude toward Holly quickly changes when she jumps into action just as Tate and Angie come upon the scene.

The next day, they go scout another location and a car crashes through the window. Despite a few scrapes and bruises no one can figure out why someone is trying to stop the business from expanding.

Over at Holly's gated house, the trio put their heads together and think that the most likely suspect is mob boss Frank Tucci (who's still on trial from the seventh installment) and that he's still out to harm Angie, or maybe this time Melanie.

It's a race to the finish as Mel continues to pine over the breakup of her and Joe, and the lukewarm feelings that she has for Manny Martinez, who's come to protect them.

And the ending, well, I wasn't expecting it (and it was a great way to end it).

The reason that I'm saying this is a borderline miss deals with the fact that at the end of the seventh installment (it too being unexpected) that ending is never really explained until maybe halfway through this novel. Even then, it really wasn't a satisfying explanation, but with the ending to Vanilla Beaned, I think if Jenn McKinlay was standing in your living room, you would literally throw the book at her. I was mad and disappointed!

Another reason I call it a borderline miss, is even though the characters leave the bakery setting in Scottsdale, I was hoping for a little bit more when it came to a new setting.

Sure they were in danger, but if you're in Vegas, who says that you can't have a little fun? 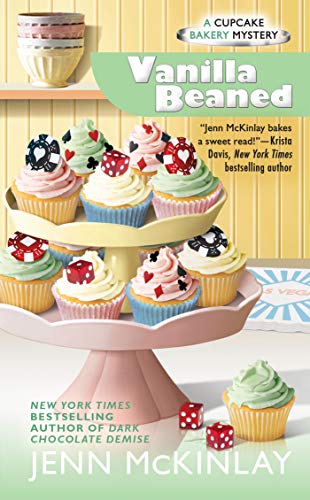