After ten installments of this series (along with writing others) I'm surprised that Jenn McKinlay's head hasn't exploded with all of the plots and characters running around in her head.

I would call this installment a milestone, Angie and Tate's big day is fast approaching and while the nerves haven't kicked in, the murders have.

The bodies start to pile up when she and Melanie head over to the photography studio of Blaise Ione and find his body and then the following morning, Angie's brother Tony, tells them that the limo driver they hired was also found dead.

But that's only the beginning of the carnage as Mel gets a phone call from Cassie Leighton, the owner of an independent bookstore, who's in a jam.

Not only does Cassie own a bookstore, she is also a publisher and is hosting an event for new/local novelist Elise Penworthy. Elise's book The Palms is a scandalous tell all about her former neighbors. She takes no prisoners as she tells what goes on behind closed doors in her former neighborhood.

Cassie needs a quick five hundred cupcakes for the event, but Mel tells her that with the wedding coming up, she can't fulfill the order, but the rest of her crew rallies around her and they decide to pull an all-nighter. This also helps calm their nerves as they don't know why Tate and Angie are being targeted and with police protection (and Angie's brothers around) they feel pretty safe.

That is until Mel finds out the real reason why Cassie called. The baker she had was also murdered.

During the event, emotions explode as Elise is confronted by her neighbors and her husband's young wife gets into the circus like atmosphere.

Cassie calls off the remainder of the event and they head off into the hotel bar for a drink to calm themselves, when Elise disappears and is found in a booth. She survives the stabbing, but later dies due to complications.

With four deaths, it's time for Mel to figure out who wants to ruin the wedding along with why Elise was killed.

Usually in a crimozy, there might be two murders, but I think fans of "serial" killers will enjoy this installment, since there are multiple murders involved and of course what really is the killers motive since those that die also had connections to the wedding.

This is a somewhat fast read, but McKinlay also hints along the way that both Angie and Tate may be having doubts about walking down the aisle (afterall, the three of them are best friends and the dynamic between them has already changed) so that's something to watch out for.

I think my only complaint about the book is now I may want to move to Scottsdale, because it seems like a nice little town, but, in the past, there was talk of high humidity, so, maybe I won't. 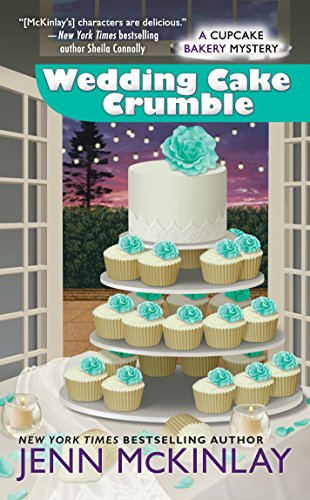