Book Review: Yetunde: An Ode to My Mother by Segilola Salami

A story for multiple cultures

Children’s books help young readers to understand the world beyond their own environment. Stories teach them about different lifestyles, cultures, and customs from all over. Author Segilola Salami has provided young readers with a tale written in both Yoruba and English to expose them to a different culture but also to teach a universal lesson about the love between mothers and children in her book, Yetunde: An Ode to My Mother.

Yetunde is a young child from African descendants growing up in England. During the course of the story, she listens to her mother tell an African folktale which doubles as a family history.

Her mother’s story is very dark, filled with death and sadness about the loss of Yetunde’s grandmother. Yetunde is as understanding a listener as she is a naïve narrator, pulling off both roles despite her young age. She is a very unique character in that she is only nine months old and not able to express herself verbally very well. She is still very confused about the world with the added complication of learning both English and her mother’s African language, Yoruba.

African customs and traditions are also highlighted and explained within the story. Salami is very aware of an English-speaking audience’s ignorance towards such customs, even adult readers, and she is careful to explain unique words and practices to the reader. She also throws in more familiar references for an English audience, sidetracking to mention them specifically, such as Avatar: The Last Airbender, connecting the show to the story she is telling to help make it more relevant to the reader.

There is also the fantasy element to the story within the story, featuring a water god who plays an integral part in the parable. This water element represents motherhood, the central theme running through the story and shows how far a mother will go for her child, stating: “Water has no enemy. Anyone who tries to fight with water has doomed himself.” The events turn terribly dark at points, trusting the readers of all ages to be able to handle these scary elements, from kidnapping to fantasy violence to personal loss.

Salami holds nothing back in order to tell her tale, showing that mothers cannot protect their children from the world, but they will fight for their safety, and children should arm themselves with knowledge of the world so that they can be aware of danger and use their mothers’ parables as more than a simple bedtime story. I like the idea of keeping children in the loop with the ways of the world, mixing the good with the bad. The world is a scary place. The better you are at identifying evil, the more likely you will be able to stay away from, or at least ahead of it.

This is the third book that Salami has written featuring Yetunde. Without giving too much away, this Yetunde story ends on a cliffhanger, paving the way for future books. As Yetunde learns and develops, she teeters between a traditional African heritage and a modern English lifestyle, and as she begins to be able to express herself verbally in both languages, Yetunde is constantly taking in information from both perspectives, making her well-rounded and open to multiple cultures and what they can teach you.

Buy Yetunde: An Ode to my Mother here! 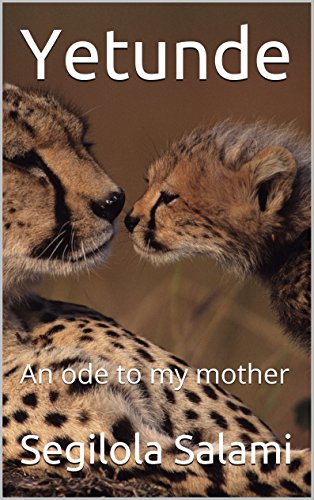 Yetunde: An Ode to My mother
Buy Now