On What Grounds ~ The First Coffeehouse Mystery 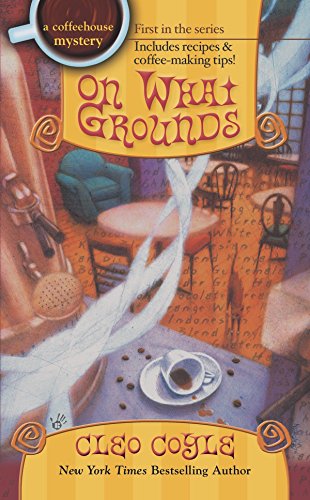 On What Grounds (Coffeehouse Mysteries, No. 1)
Clare knew that Annabelle was a ballet student. She was too graceful to trip and fall down the stairs while taking out the garbage. Yet, that was the official story of her "accident".
Buy Now

"She Was a Dancer"

On What Grounds begins with a Prologue. The Prologue is in italics, and actually "shows" us what leads up to the crime.

She was a dancer. Young, slender, pretty, but not particularly beautiful. And not special.

From the corner of Hudson Street, the stalker watched her prancing about behind the tall French doors, sweeping, mopping, wiping --- the gleaming wood floor, the marble-topped tables, and the silver espresso machine.

The hour was late. The place was closed, but the coffeehouse lights beyond the tall clear windows shone with a disturbing intensity, harsh beacons that burned through the thick layer of fog rolling in off the cold, dismal river just a few blocks away.

The Darkness Reveals the Light

The stalker gets swept along in the "ethereal current like some passenger on a ferryboat bound for the underworld."

We know that ferryboat --- the one in which the old ferryman, Charon, transports the dead.

" . . . the current that carried away any last surge of sentiment, of creeping conscience, of warning whisper that one day there might be regret."

These are the only words Annabelle speaks in the present tense.

Everything else we know or see about Annabelle --- we learn through dialogue, or from Clare's flashbacks. Clare tells the story in the first person.

I wondered what that meant.

At the end --- when the murderer confronts Clare at the Blend --- she describes the criminal as:

"The type who could look at a human being and then assign a worth based solely on a coldly calculated business strategy or perceived use in . . . self-gratification. People were . . . just pawns. . . . Madame Blanche Dreyfus Allegro Dubois had seen his type before, too. Back in World War II they'd worn swastikas."

"The Perfect Cup of Coffee is a Mystifying Thing"

Well, that's not the only mystifying thing --- although I do love and appreciate the advice Clare offers --- as I myself am always lusting after that perfect cup.

We're also wondering what happened to Annabelle. She obviously knew the stalker.

Clare reminisces about the morning she had found Annabelle at the bottom of the basement stairs.

She tells us that she had been stuck in traffic that morning after having moved all her stuff from Jersey -- where she and daughter, Joy, had lived for ten years --- back to Manhattan, to manage The Village Blend coffeehouse, and to live in the apartment upstairs.

She writes that she was in the vulnerable position of having become addicted to the perfect cup, but deprived of that to which she was addicted.

On page eight, Clare refers to finding Annabelle at the bottom of the basement stairs. The store was locked, and the garbage was scattered about.

But, in chapter two, it turns out that Annabelle is still breathing and has a slight, small pulse. So, thank heavens, she's still alive.

In That Kingdom By the Sea?

In Chapter 24, Clare discovers a wet wad of tea leaves in the garbage can that Annabelle was about to take to the alley. The wad is wedged between the inner and outer plastic bags.

I don't mean the grunge band, either.

In chapter one, Clare recalls Annabelle's having said, "Don't worry, Clare. If there's anything I've had plenty of experience with, it's handling garbage."

That day --- when Clare first arrived from Jersey, and was still looking around the Village Blend for Annabelle --- Clare slipped on something.

" . . . I saw that one of the stainless steel under-counter garbage cans had been moved to the top of the service staircase that led to the basement. . . Why would Annabelle have moved the heavy can when she could easily have pulled out the plastic bag lining it . . .?"

The Light Gives Away the Dark, Dancing On an Endless Expanse of Smooth and Level Floor

In Chapter Eighteen, Annabelle's dance teacher, Cassandra Cannelle, says --- after Clare interrupts her solo dance in the studio --- "All I want out of life is perpetual music and an unending expanse of smooth and level floor."

Eventually, Annabelle dies in the hospital. She never recovered consciousness after the fall down the basement stairs.

The last page ends with Clare thinking about Annabelle's short, difficult life. Annabelle was trying to rise above the sordid garbage. Yet, she had made some foolish choices.

Clare tells us, " . . . I just hope that, wherever she is now, she has perpetual music and an unending expanse of smooth and level floor."

I loved this book. I highly recommend it, whether or not you have already read others in the series. Alice and Marc (er, I mean, Cleo) do some great storytelling work. I never got lost during any time transitions or reminiscences. (For me, that's really saying a lot. I have a learning disability, and other psych issues. I'm easily confused.)

Alice and Marc do a great job of contrasting the sordid, miserable and repulsive against the beautiful and uplifting. "The darkness reveals the light."

I realize that yesterday was the two hundredth anniversary of Charles Dickens' birth. I feel that this event has been highly sterilized, corporatized and sanitized so much that Dickens himself would probably disapprove. He would not have appreciated the use of his name to maintain the status quo in this way. Dickens did not like middle-class frivolity --- even though, eventually he did become middle-class himself, because he was so famous. (But, then, he inadvertently ran amok of middle-class expectations and standards before his untimely death in 1870.)

Personally, I think that Alice and Marc have done a much better job of capturing the true spirit of Dickens than anything connected with this 200th anniversary business.