We Wish You a Merry Murder, by Valerie Wolzien; A Murder Mystery for Christmas. Review.

We Wish You a Merry Murder, by Valerie Wolzien

This book is a really rollicking, rocking good time.

A Riff on Wealthy Suburbanites

"The large, white Cape Cod cottage looked like an illustration in an advertisement urging people to spend Christmas in Connecticut, to experience Christmas 'as it once was.' If, of course, Christmas once was suburban and wealthy."

That's a strong theme in this book --- that the way these folks live in Hancock, Connecticut is a little shallow and materialistic.

And out of reach for most of us.

We Wish You a Merry Murder - A Murder Mystery for Christmas 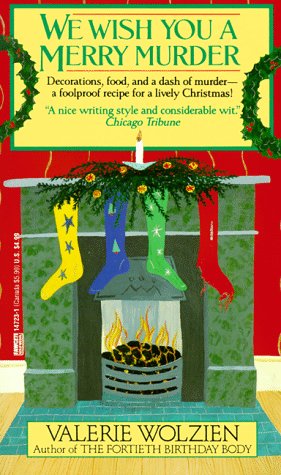 We Wish You a Merry Murder
Kelly Knowlson always knew Evan, her ex-husband, would return to her. But, Rebecca Knowlson, Evan's present wife --- who lives on the adjoining property --- feels Kelly is a little "off" --- especially when Kelly announced Evan was dead. If Evan were really dead, where is his body? And, what were Rebecca's twins from her first marriage really doing in that shed during their mom and stepdad's party?
Buy Now

"Merry Christmas! I was watching from the window and I saw you leave the cobblestones first, Jen! But, it's Christmas and I forgive you all! Come in. Come in."

"Merry Christmas, Kelly." Jennifer entered and kissed Kelly Knowlson. An attractive woman in her mid-forties, Kelly was clinging to the look prescribed in the late fifites --- fluffy hair pulled back by a headband and wearing a kilt and matching cashmere twin set. "I'm sorry I messed up your picture-perfect entrance, but I thought you'd appreciate me not killing myself on the way to your party. Bloodying up the walk and all that."

"You look wonderful --- so tan," Kelly said. Susan noticed that she didn't assure Jennifer that walking on the grass was allowed.

Later, after the guests were situated in the living room, Kelly entered carrying

. . . a large silver tray, which she placed on the coffee table before the fire, then sat down in a wing chair that seemed to have been saved for her. She pushed back the tortoiseshell headband she wore and smiled at everybody.

"I always think of my party as the beginning of the holiday season here in Hancock," she announced.

How Do They Do It All?

Susan's mother-in-law, Claire, visits with Susan and Jed for the holidays. Her arrival is a little earlier than expected, though.

Then, there's Kathleen's mom, Dolores, who's staying with Kathleen and Jerry.

Claire and Dolores are both flirting with Dr. Bob Barr, a self-proclaimed nutritionist who is actually a podiatrist.

In addition to shopping, attending parties and hosting parties, picking out a tree, singing in the choir, cooking and eating, now there's also a missing neighbor, Evan Knowlson, whose corpse Susan and Kelly claim to have seen sitting in Kelly's living room, with a cup of hot chocolate, a book, and Christmas cookies on a small table beside the chair.

Written by a Jersey Gal

The author grew up in New Jersey.

One of the characters in the book, Elizabeth Stevenson, also grew up in New Jersey.

Not Princeton, not Bernardsville, just a tiny town in the middle of the state without cachet. She had worked her way from a scholarship at a state teachers' college, to a masters in marketing at NYU by commuting into the city five days a week for one and a half years. Then on to a beginning job in the basement of Macy's, to stores further uptown, and from assistant buyer to buyer, to where she was today. She had made the most of every opportunity.

Elizabeth's husband, Derek, on the other hand, had not had to work so hard. His family was wealthy, and he "had spent his entire life moving in various prescribed paths between . . . Bar Harbor and Palm Beach, between Hancock, Connecticut, and Madison Avenue. He had gone to the right prep schools, the right colleges, and was settled happily into the right Wall Street brokerage house."

Elizabeth and Derek's two kids were usually at boarding school now that they were old enough. When they had been little, nannies and au pairs had taken care of them.

Shop Til They Drop

The gals in this book jump into the car anytime, go to a fancy store --- even in Manhattan --- and buy whatever gift they want. They're always tired from the shopping and cooking.

But, then, that's part of what a cozy mystery is supposed to be: --- vicarious wish-fulfillment.

How Cozy Do We Want To Get?

This book has most of the characteristics of a cozy mystery.

But, some folks might say it can't be a "real" cozy, since there are firearms involved --- although the firearms aren't exactly dominant in the story, and never really appear "onscreen".

If you want to read more about what makes a cozy mystery cozy --- or not --- check out my Hub on that subject.

The Characters Are Still Likable, Though

Even though the author calls the reader's attention to the somewhat privileged and perhaps even shallow lifestyle of the folks in Hancock, I still didn't have a problem liking most of the characters.

In fact, the murder victim's own lies were the biggest hurdle in preventing the murderer from being identified.

On the list of Wolzien's other books, I noticed another about a Christmas murder: 'Tis the Season to be Murdered; and a murder for New Year's --- A Good Year for a Corpse.

Here's a Link to My Cozy Mystery Hub