Go to any comic book convention and you will usually find the most common cosplay costume among women is one Harleen Frances Quinzel MD or Harley Quinn as she is better known, Harley is a massive favorite with female comic book fans and also with many younger readers as they know her from the Batman animated cartoons they are so familiar with, Harley Quinn has probably made more of an impact in the comic book world than any other character in modern times and the books that feature her are becoming very very collectable.

The character of Harley Quinn was created by Paul Dini and Bruce Timm and was first introduced in Batman The Animated Series in 1992, Harley was voiced by Hynden Walch and spoken with a pronounced Brooklyn accent. The animated series first told how Quinzel an Arkham Asylum psychiatrist falls hopelessly in love with her patient the "Joker" and soon becomes his put upon and mistreated sidekick. The character soon became popular with fans of the show and Harley was soon to be introduced into the main DC universe comic books.

It would be hard to mistake Harley Quinn for any other character in the comic book universe, with her tight striking black and red costume and white face it is no wonder that she is a favorite with cosplayers at conventions, where she is often seen alongside another fans favorite Poison Ivy.

As a character that has only been around for a relatively short time in comic book terms, around 22 years, there is obviously not going to be the anywhere near the amount of collectable books associated with the character as there are for more established characters such as Batman or Spider-man but there are still quite a few books that are worth collecting that feature Harley, and with her present popularity it seems likely that these books can only keep on rising in value.

This issue released in September 1993 is the first comic book appearance of Harley Quinn. There seems to be many of these available for sale in the USA but they appear to be quite rare in the UK. Buyers are asking as much as $900 for near mint graded copies of this book on eBay, much cheaper prices can be found on lesser grade copies, if anything this is where the value may lie in this comic as i can see the lower grades having some room for growth for some time.

Batman Adventures Mad Love #1 is a one shot comic book written by Paul Dini. The book tells the origin of Harley Quinn and the first prints of this issue especially in high grade are becoming collectable. 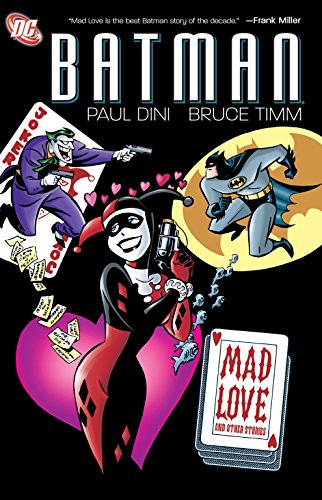 Batman Harley Quinn is a prestige format one shot comic released in 1999, it features a fantastic cover by artist Alex Ross and a story by Harley creator Paul Dini. This issue is the first story where Harley features in a story that is canonical to the DC universe.

Still available for just above cover this comic tells a new version of Harley's origin, plenty of room for growth with this issue and indeed at cover price all the Suicide Squad issues that feature Harley are worth a look.

Another comic based on the animated series , these books also feature Harley's friend Poison Ivy.

Harley makes her 3rd appearance in this issue which based on the animated series.

Original series is beginning to gain in value and the recently released 2013 series maybe worth collecting in the early issues but it has not been greatly received.

Such is the current popularity of Harley Quinn that it would probably be fair to say that any comic book or Graphic novel that features Harley Quinn is worth collecting from an investment point of view at the moment. As well as comic books Harley features in other media such as trading cards and figurines and games such as "Injustice Gods Among Us", Harley is a character that will continue to be majorly popular for some time to come.