Defenders of the Faith: Christianity and Islam Battle for the Soul of Europe 1520-1526 Review

The early 16th century was a momentous time in Europe, with the discovery of the Americas and its colonization, the Italian Wars, the inexorable advance of the Ottoman Empire, the sack of Rome and above all else the Protestant Reformation. It forged Europe for centuries thereafter, setting the scene for dramatic future historical events such as the Third Year's War and dramatically changed the course of history for nations from England to Hungary. With material like this, it isn't surprising that James Reston's book Defenders of the Faith: Christianity and Islam Battle for the Soul of Europe, 1520-1536 is an exciting book, flitting across Europe and the Middle East and from quote to quote, king to king, army and battle to army and battle. It is fun and enjoyable to read - but has severe limitations about its analysis and coverage of the theme of these historical events.

The structure of Defenders of the Faith is slightly different from the normal, being split up into 10 acts and each of these into chapters - but other than this it is a relatively standard chronological structure which doesn't need much accounting. It starts out with the Field of Cloth of Gold and the attempts to forge a friendship between France and England, before continuing on with the Diet of Worms about how to deal with the emerging menace of the Protestant Reformation. The book wanders to different key subjects - to the Pope, with the sack of Rome being a crucial feature in the middle of the book, the reformation in Germany, the Italian Wars, the Ottomans and their various military campaigns in the Mediterranean and then Hungary, to the Hapsburg and their policies, pushing year to the 1530s - and somewhat beyond, as it follows figures such as Charles V and Suleiman in abbreviated form to their deaths. Most of the emphasis is placed on military campaigns and wars, with a much smaller segment devoted to the reformation in Germany and some elements of the beginning of the Counter-Reformation.

Reston's work is a fascinating and engaging book. He writes with real elan and dash, and has an excellent degree of quotes and sets the scene well with his descriptions and mise-en-scene of key events. It is a respectable length, at nearly 400 pages, but seems shorter than it is, without the tendency to drag and the proclivity to boredom which other history books can have. There is a good caste of characters, with Suleiman the Magnificent, Charles V, Francis I, who are followed throughout the book and who one starts to get a genuine feel for as people: and it has its appreciation for tragedy, such as the murder of the Vizier of the Ottoman Empire by his friend, the Emperor himself. It both has enough description and detail about its subject to feel satisfying - while at the same time keeping on target, and not veering off on side-topics. With all of this which is positive about the book, why is it also one which falls far short of a really masterful historical work?

The term "eurocentrism" is often thrown around these days, particularly in academic settings and in history. Sometimes this is done to excess - but in Reston's book, I think it is an apt critique. Reston writes on many occasions about the jealousy and the obsession of Suleyman with Europe and with comparing himself to Charles V, and of his belief that he was being slighted by the European powers - but never answers the question of why Suleyman cared. Suleyman ruled over one of the largest empires in history, which stretched across the entire Eastern Mediterranean, from Ethiopia to Hungary, from Algeria to Armenia, to the gates of Vienna and deep into Iran - and yet he is portrayed as a man who wished nothing more than to gain diplomatic respect from the small and quarreling kingdoms of Western Europe. Perhaps this was true, but it is never satisfactorily explained and it seems unlikely to me: it seems as is Reston is taking our modern conceptions and applying them to the 16th century. The same can be said about nationalism, as it is nations, rather than dynasties and the European noble classes, that emerge as dominant themes in the book. The European nobility had much more in common with each other than with the peasants under their rule, and politics was dominated by the links of blood and dynastic fealty - and yet here things seem much more akin to a 19th century reading.

What is more, Reston is willing to write about historical events and to make them exciting, to write a story - but he is much less willing to write a narrative, to reflect on the tremendous import of the events which he is discussing, to talk about the transformations that they had on peoples' lives. The Protestant Reformation and its intellectual ferment gets coverage beyond its import on international politics in only the slightest and most desultory fashion. Or what about discussing the link between the Turkish threat and the Reformation - was it the Turkish threat that made the Protestant Reformation possible, through its unprecedented threat to Europe which prevented the possibility of crushing or attempting to crush previous heresies, such as the Cathars in France or the Hussites in Bohemia?

There is also a complete lack of footnotes, which is especially galling since he has such a huge number of quotes, and it would be very interesting to know where they come from. It is a popular history book, but I would still expect some footnotes for these constant quotations.

The result is a work that lacks depth, that is easily read but doesn't engage deeply with the subject, which is a superficial recounting of the era. It is a fun book, but hyperbolic, flawed, riddled with biases. It isn't bad, and it gives a fast in and interesting introduction to the era, but it lacks the depth needed and is quite shallow. One would probably be better off reading the books in the bibliography at the end after using this work as a general introduction into the subject.

3 stars for Defenders of the Faith 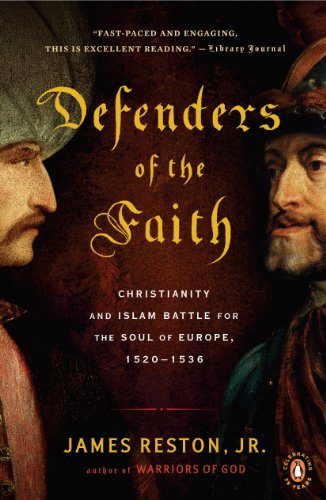 Defenders of the Faith: Christianity and Islam Battle for the Soul of Europe, 1520-1536
Buy Now