For me John Dunning is a trifecta interest hit - mystery author, old time radio authority, and to make it really sweet he writes mysteries about book collecting and old time radio! A book scout is an individual who hunts for books in various locations and then resells them for a profit. John Dunning has been doing this for years. First selling books from a store, but then after he became a published mystery author, he moved to Internet sales. 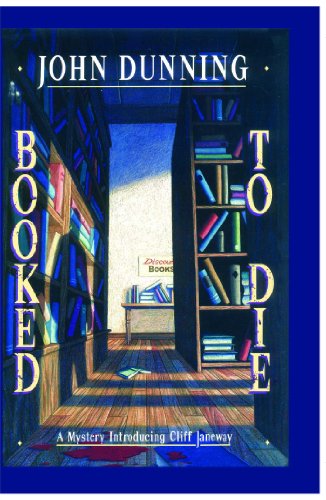 Dunning's series about Cliff Janeway, book scout and bookseller, are well written mysteries that satisfy the book lover, or the mystery fan in general. "Booked to Die" got the series off to a great start, and first editions are very collectible. Since we see Janeway evolve in the books, it's one of those series best read in order. But don't let that hold you back from starting any of the books because they stand alone well. His latest book, "The Bookwoman's Last Fling", also brings in the world of horse racing, one of his early career stops.

I first came upon John Dunning through his Encyclopedia of Old Time Radio. If I could only have one book on the shelf about Old Time Radio (OTR), Dunning's encyclopedia would be that book. It's a massive volume with lots of facts and interesting information on thousands of shows.

To try the Cliff Janeway series, start with "Diehard".

To explore the fascinating world of old time radio, get "On the Air: The Encyclopedia of Old-Time Radio".

As the Janeway series increased in popularity, they closed the retail store in 1994. The book reseller business has continued on the internet, under the same name.

Independent booksellers are generally book collectors, as well. Their collection is their inventory. Usually there are items that are not really "for sale".

Dunning also collects recorded episodes of old radio shows. The thriving collection hobby covets what is called, old-time radio, or OTR for easy typing, Swapping of copies of episodes is very active on the internet, They are sound recordings, so are available in several formats. The most common format is known as mp3.

Dunning's Encyclopedia is one of the authority reference books in the hobby.

On the Air: The Encyclopedia of Old-Time Radio
Buy Now

There are many more terrific mystery writers whose names may not be on the NY Time's list, but deserve to be on a mystery reader's list. Discover Mystery Authors is a HubPage with a sneak peak at many more author's that you should check out!