"Dragon Prince" is one of those books that is like an old friend. I'm not sure how many times I've read his book at this point; it is probably at least six, maybe even seven.

The form that magic takes in the "Dragon Prince" universe is Sunrunning. Well, there's also . . . but that would be a spoiler, though, so . . . Sunrunning is the magic of this fantasy universe, though it can't be used for teleportation or to change the nature of objects or anything like a lot of fantasy magic can.

Primarily, Sunrunning involves light and fire. The first thing young Sunrunners learn to do is what's referred to as "calling fire," which is to light a candle using just their thoughts. Eventually, they learn to project themselves on the sunlight, which is the activity called "Sunrunning," to watch events happening at a distance and communicate with other Sunrunners. Some Sunrunners eventually also learn to project themselves on the moonlight (though Sunrunners are forbidden to use starlight), as well, and fewer still learn to do more advanced conjuring, such as seeing the future and showing others images in fire.

The weakness of the Sunrunners is shade. If they stray into the shade while Sunrunning, they become "shadow-lost" and their souls cannot find their way back to their bodies. Within days after becoming shadow-lost, their bodies die. Since people walk and talk in their sleep, I wonder if Sunrunners ever Sunrun in their sleep? I would assume that this would be an actively dangerous possibility for Sunrunners unless they could somehow train themselves to only do it on moonlit nights. I don't think that Rawn ever tells us.

The overarching plot of the "Dragon Prince" series is the story of how the love of one man and woman for each other and their friends and family changed the world they lived in.

It starts with Rohan and Sioned, who were matched together by his aunt and her teacher, Andrade. The world they live in is one where might makes right. The ruler of their world is the High Prince, Roelstra, who rules by fear and intimidation. Rohan has big dreams, though, and wants the world to be run under the rule of law, so that everyone knows what is expected of him or her.

Sioned had been sent away to Goddess Keep, home of the Sunrunners, by her brother's wife. While there, it was discovered that she has very powerful Sunrunner talents. But it's her ambition and her intelligence that make her truly formidable.

"Dragon Prince" focuses on the first years of Rohan's life as a ruling prince. He has just inherited the Desert upon the death of his father, and he begins by playing a little game with Roelstra. You see, Roelstra has sixteen daughters (by five different women) and no sons. And so, even though Rohan loves Sioned and plans to marry her, he lets Roelstra think that he is going to marry one of Roelstra's four eldest, and only legitimate, daughters. Rohan has no illusions and knows that the moment he produced a son, his life would be forfeit. This would give Roelstra the right to rule Rohan's princedom, the Desert, through Rohan and the daughter's son.

Then there's another scene, which actually immediately follows the third scene. It's a very violent male-on-female rape. Except insofar as it isn't, if one defines rape as lack of consent on the part of the victim. I'm extremely conflicted about what, exactly, happens in that scene, though Rohan isn't. He spends the rest of the series berating himself for it, and I feel that it isn't so clear-cut as that. Frankly, I think that he is as much the victim as his "victim" is.

Lots of time passes very quickly in this series. This book in particular covers a period of seven years, but we only see a few months at the beginning, then another couple of months six years later, then one day about a year after that.

Despite the sexual violence, "Dragon Prince" is a wonderful book and I highly recommend it. 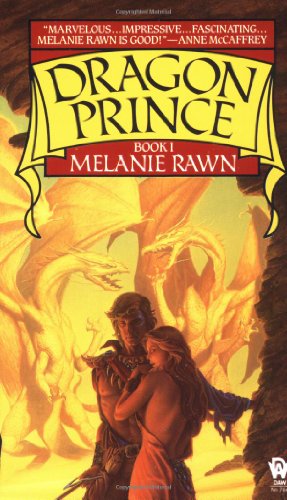