As soon as they woke up, they knew what their day would be like. They would be given little to eat, made to work hard, have little time to themselves, and life would be as joyless as it had been for years.

No one knew why the Master acted the way he did. Why did he not understand that by treating them well, he would get just as much work from his workers, but they would be happy. They would want to work for him, and they could bring a little fun to his life.

Stories were going around about The Masters past and the fact that he wasn't always like this. Some said he had gambled away the family fortunes and that is why he was working himself. Another view was that his father did. That is why he was so bitter, his lifestyle had been taken away by someone else.

Obviously one variation was a lost love. But lost where? DId she die or leave him for someone else? Maybe he was hiding from the person whose heart he had broken.

There had to be the suspicion of a prison sentence. He had committed a a violent act, or tried to steal a fortune.and had changed hos name to hide from the law.

There was no time to think about this any more so they all got up and headed down for their meagre breakfast.

No sooner had they finished and they were out of the door. Keeping close for safety and warmth, they made their way down to the cabin. Taking their places they quickly started working and tried not to catch the eye of the master. Another day just like yesterday. There was nothing to look forward to as each day was just like the last.

The sound started quietly and and was only acknowledged with a quick look round to see the source. The master`shouted for them to carry on, but as the noise grew,there was clearly a litle bit of unrest.

After a couple of minutes, even the master was looking concerend as it was impossible to determine what it was.

With an almighty roar, a figure came through the door, and without exception, they all screamed and ran from their posts.

It was taller than a normal sized man, and had patches of hair in places that were not usual. His eyes were bright and staring. They soon realised that it was not hair but horns. They really did have the devil amongst them.

One by one he pushed the boys out of the way. He was heading straight for the master and the master looked as if he was expecting it. He sank to his knees and looked broken but resigned. The devil drew his pitchfork and forced it through the masters chest. He looked up to heaven and then fell forward dead.

Fifty years later some of the boys - now old men - met up for what they imagined would be the last time. They had heard rumours of strange goings on where they used to work. By midnight they had decided to make one last visit to the cabin and the place their freedom started.

The next day they got up and made their way on the journey they had made so many times. All the old feelings and fears came back but they laughed them off. They had only just entered the cabin when they were stopped in their tracks. The noise they had heard many years ago started up again. Their collective blood ran cold as the door burst open and the devil walked in. As he strode through the cabin they realised the master was also there. Only he did not look a year older than he had. The same scenario was played out and the master again fell dead.

They realised that there was a sense of justice in what seemed to be happening. Whereas the master had made their lives a misery day after day, his punishment was to relive his death until eternity.

Each day for him really was just like the last. 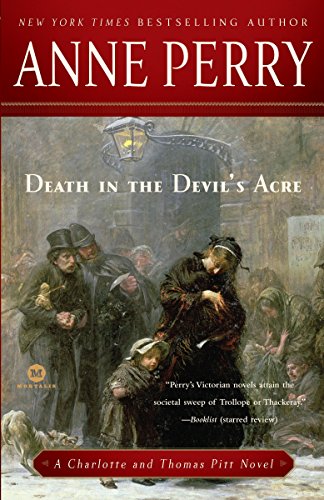 Death in the Devil's Acre: A Charlotte and Thomas Pitt Novel
Buy Now