Federico del Sagrado Corazon de Jesus Garcia Lorcawas a Spanish 20th century poet, dramatist and theatre director and the most important Spanish poet and dramatist of the 20th century. He was internationally recognized as a member of Generation of '27, a group of artists that exposed him to surrealism. Lorca became another casualty of the Spanish Civil War when he was executed by the fascists at the beginning of the war.

He was born in Fuente Vaqueros, a small town near Granada in Southern Spain in the region of Andalusia. He grew up here and embraced the fierce passion for the Andalusian and Spanish culture of flamenco, gypsies, and bullfighting. He epitomizes the culture of his country and lyrically and poetically expressed this Spanish passion so well in this writings, that Spain considers him their greatest and most important poet.

During high school, he was traveling on an extended field trip with his class to Madrid when the world opened up for him. In Madrid, he embraced all that the capital city of Spain had to offer; the museums, the art, the poetry, the passion of the city. When he returned home, his teacher recommended to his parents that he attend the Residencia de estudiantes, a progressive Oxbridge-inspired school in Madrid. So in 1919, he went off the this school in Madrid.

In the meantime, regardless of any personal relationship he and Dali did or did not have, he wrote some early plays that were not well accepted by the public or the artists and in 1921 he wrote and published his first book of poetry. Libro de Poemas (Book of Poems) was a compilation of poems based on Spanish folklore. After the publication of this poetry book, Lorca became involved in Spain's avant - garde.

In 1928, he published two poetry collections - probably the most important of his career. He published "Canciones" (Songs) and "Romancero Gitano" (Gypsy Ballads). It is this second one that became his best known book of poetry. It is full of gypsy culture and flamenco, the folkloric dance of Andalusia. It is a highly stylized written work of the ballads and poems that were still being told throughout the Spanish countryside. Many of these poems from Andalusia had been in existence since the Middle Ages. Lorca described the poetry as, "a carved altar piece" of Andalusia with gypsies, horses, archangels, planets, breezes, rivers, crimes, "where the hidden Andalusia trembles".

This book, "Gypsy Ballads", brought him fame across Spain and the entire Hispanic world. The resto of his life, Lorca would search for the elements of Andaluce culture, trying to find its essence without resorting to the "picturesque" or cliched "local color." He was trying to find the earth of Andalusia and its people and culture.

With the success of &quot;Gypsy Ballads&quot; came a rift and estrangement from Salvador Dali and a breakdown of a love affair with sculptor, Emilio Soriano Aladren. This brought on a depression and anguish over his homosexuality. He felt he was trapped between his public persona of a successful author which he was forced to maintain in public and his tortured, authentic self, which he could only acknowledge in private.

His family was so concerned about his mental health that in 1929-30 they arranged form him to take a long visit to New York City. Here, he enrolled in Columbia University School of General Studies. He studied English but was really more absorbed by writing. In the Harlem section of NYC, Lorca found connection between the Spanish deep songs and African-American spirituals he heard here an his Andalusian poetry.

His "Poeta in Nueva York",(A Poet in New York), published after his death in 1942, is full of tortured, ambiguious and deliberately dissonant surrealist poems. They explore the alienation and isolation through some graphically experienced poetic techniques.

He returned to Spain in 1930, which also coincided with the re-establishment of the Spanish Republic. Upon his return, Lorca was appointed and as director of a university student theater company, La Barraca, which he helped to co-found. It toured Spain's cities and rural areas to introduce audiences to radical modern interpretations of classic Spanish theatre. After his work in NYC and Harlem, Lorca had been transformed in to a passionate advocate of the theatre of social action.

It was during his time touring with this theatre that he wrote his best plays, &quot;Blood Wedding&quot;, &quot;Yerma&quot; and &quot;The House of Bernarda Alba.&quot; All three plays reblled against the norms of bourgeois Spanish society. These works challenged the accepted role of women in society and explored taboo issues of homoeroticism and class.

By 1936, Lorca wrote and published. &quot;Sonnets to his dark love.&quot; These were believed to have been inspired by his passion for Rafael Rodriguez Rapun, but recent documents discovered in 2012, suggest the actual inspiration was Juan Ramirez de Lucas, a 19 year old with whom Lorca hoped to immigrate to Mexico. The actual sonnet writing was inspired by the 16th century poet, San Juan de la Cruz.

Lorca left Madrid for Granada three days before the Spanish Civil War broke out in 1936. He knew he would be suspect to the rising right wing, the fascists, for his outspoken liberal views. He refused to hide his liberal views or homosexuality, while continuing to write. He was arrested by the Nationalists militia (Francisco Franco's side) and was executed on August 19, 1936. He was executed with three others at Fuente Grande (Great Fountain) on the road , between Viznar and Alfacar.

In 2009 and 2012, Lorca's family had the grave excavated, but his remains have never been found. It is a mystery today as to where his burial remains really are located and / or buried.

Do you enjoy Lorca's poetry?

Romancero Gitano (Gypsy Ballads) is Lorca's great work of poetry that shows us his great passion for Andalusia. Here he describes for us his beloved Andalusia and Spain, but especially Andalusia, the region from which he comes. This collection of poetry is profoundly Analusian and the poems are richly somber in their mood and imagry and disquieting in their projection of a part-primitive, part-private world of myth moved by dark and not precisely identifiable forces. The poems express his personal anguish as well as a superb rhythmical nd linguistic sense.

The weeping of the guitar

The goblets of dawn

The weeping of the guitar

It weeps for distant

and the first dead bird

"Song of the Barren Orange Tree"

Cut my shadow from me

Free me from the torment

of seeing myself without fruit.

Why was I born among mirrors?

The day walks in circles around me,

and the night copies me

in all its stars

I want to live without seeing myself.

And I will dream that ants

and the thistleburrs are my

leaves and my birds

Cut my shadow from me.

Free me from the torment

of seeing myself without fruit. 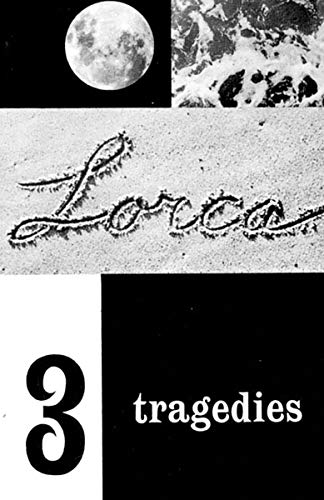 Federico Garcia Lorca was also a great playwright, although he got off to a shakey start. In 1919-20 he wrote and staged his first play,"The Butterfly's Evil Spell." It was written in a verse / play form, but it was unsuccessful and closed after four performances. It was not just unsuccessful, it was laughed out of Madrid by the critics. Lorca, had a very hard time accepting this and it was not until 1927 that he tried his hand at playwrighting again. This time with, "Mariana Pineda", he was successful and the play was very popular at the time. Both of his plays were folk tragedies.

When he returned from his year in NYC, and while touring with La Barraca, he wrote his best three plays, one of which was Blood Wedding. I have read this play in Spanish, and it is a tragedy written in 1932, and performed in Madrid in 1933. After its run in Madrid, it played in Buenos Aires, Argentina, where it was greatly received and very popular. This play was part of a rural trilogy along with "Yerma" and "The House of Bernarda Alba." These are Lorca's best three plays he has written.

As I said, Blood Wedding is a tragedy and also a look at feminism, Lorca style. There are many themes in the play and some of them are:

Blood Wedding is a skewed story and an original work that holds the attention of the audience in a death grip which was the style if Lorca.