Fiction is Better Than Fact

Like most genetically inclined have-to-write authors, it took me a lifetime to realise that an early decision to follow a particular path and genre might have been a mistake. Had I started out writing fiction instead of non-fiction, my workload would have been so much easier. Of course it is equally possible that had I ventured down that route, I may never have enjoyed the privilege of seeing my work on the bookshop shelves.

Anyone that has ever achieved success in writing will tell you, there is nothing to equal the sense of satisfaction and inner-glow of seeing your own name on the bookshop shelves. When it happened to me, it was the culmination of everything I had ever wanted or strived for – and it took some time for me to realise and believe, yes, it IS true – I am (finally) an author.

In reality, I had been an author ever since I was a child. I still consider my greatest life-skill was learning to write – and my best ever Christmas gift was a typewriter, given by my parents when I was about 8 years old. This was long before computers, mobile phones and the X-Box invaded the world; so much of my spare time was spent clicking away at the keys, delivering incomprehensible words to a nameless audience. I was writing purely for myself and enjoying every single moment of it.

While most kids detested school lessons, I revelled in them. English was an enforced part of my day and that was fine by me. Almost unknowingly – and certainly without any feeling of reluctance – I was learning my craft, bit by bit. By the time I was a teenager, I had written perhaps a hundred short stories and an equal volume of unfinished pieces. I do now feel rather guilty about my childhood, because I guess I am partly to blame for the destruction of the rain forest. I must have devoured a ream of paper a week in those early days, producing material that mostly went to feed the waste bin. And I suppose, because manual typewriters didn’t have the benefit of a ‘delete’ key, I must have used enough Tippex to contaminate the local water table.

Writing stories was a passion. The activity filled my life. It invaded everything and probably at the expense of other studies, a social life and the more normal teenage pastimes. But as I crossed the great divide into adulthood, my writing ambition became more of a background challenge. I had realised by then that ‘becoming a writer and earning a living from it’ was not going to sustain day-to-day activities, such as paying the rent and putting bread on the table. While the ambition never faded away, it was put in its rightful place midway down the priority list.

For many years, I just got on with the drudgery of life and work, while writing every now and then just to satisfy the inner craving. Then, in my late twenties, when my alternative career was established, the aspiration to get published re-awoke with ferocious insatiability. For whatever reason, I had a new driving force within me – and the determination was stronger than ever it had been before.

I took it upon myself to get published, no matter what, so I changed tactics and wrote about anything and everything. I had sold my soul to the devil called journalism … but it worked. Within a few months I got my first piece in a glossy magazine called Lancashire Life. I was as proud as Punch. Better still, they paid me for the privilege. A year later and I had stacked almost a hundred cheques in the bank, having had success with a myriad of different articles on the most wide ranging of subjects. The lesson I learned from this phase in my writing career was this – don’t allow yourself any time to become dejected by rejection slips, just keep writing and keep submitting. As long as you believe in yourself, someone else will too, eventually.

The Writers and Artists Yearbook was always open on my little desk in the corner of the room. There was usually a blank sheet in the typewriter and … yes, the waste paper basket was always overflowing with incomplete, unacceptable or unsuccessful pieces beaten out in the middle of the night. Nowadays, I still write more than I ever send out to publishers, but thankfully the defunct articles and manuscripts are destined for the PC’s Recycle Bin and are not physically within my line of vision.

While the journalistic approach was certainly working and had become both financially and artistically rewarding, it hadn’t quite managed to satisfy the ultimate desire to become an author. I needed to have a book published to completely reassure that unquenched spectral ego that looked back at me every morning in the bathroom mirror. In the end and despite thirty years of trying, it all happened overnight and almost completely by accident.

My day job (the one that paid a liveable wage on a more regular basis) had moved into the world of property investment. I was by this time a landlord and a rising activist in a Landlord’s Association. Inadvertently, I was again learning my trade without actually realising it. As a co-founder and board director of the organisation, I offered to write and produce a membership magazine – and a few years later, I had an enviable knowledge about all things ‘property related’. Meanwhile, I was still pushing out various articles to magazines and newspapers, though now the subject matter was defined and narrow. I had found my niche. It was property investment.

The paths of my life were coming together to create a single route, which would eventually lead to my name appearing on the spine of a book in high street bookstores.

A small publisher had seen several of my articles in the national press. They wrote to me and asked if I would consider writing a book on how best to sell property, from a ‘sell it yourself’ perspective. Ha, they were asking me if I wanted to write a book. How ironic is that? A year later, the book came out … and well, the rest is history. I am now a professional writer and author of several books. And I can tell you, there is still nothing in life that has ever come close to equalling that first publication. It was and still is unbelievably satisfying.

However, had I stuck to my guns and continued to write fiction instead of non-fiction, I wouldn’t need to spend half my life updating, researching and re-writing past works. The problem with non-fiction is, if it’s a successful book, it’s like nurturing a child into adulthood. There’s the second edition version to prepare for – then the third - and if you’re lucky, a fourth or more. My particular subject matter needs constant updating, because laws and practices change. Even a re-print of the same edition needs a month or so of hard revision, just to prepare it for the publication date.

On the other hand, a good story is timeless and needs no onward alteration or modification. Once it’s produced, it’s done. I have come to be extremely envious of fiction writers and rather wished I hadn’t strayed from that particular path. But hey, in the end, I’m doing a job I absolutely love doing and would do it even if I wasn’t being paid to do it – so, in reality, I’m not actually working for a living at all.

A Selection of Books by Tony Booth 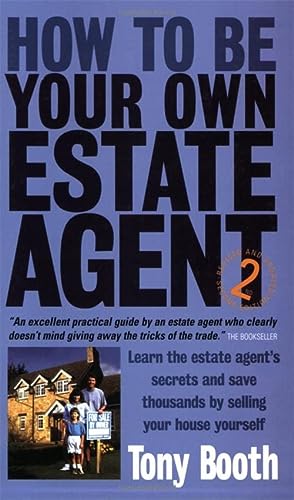 How To Be Your Own Estate Agent: 2nd edition
Buy Now