This is the fourth book in the Seeing Jesus series. This fictional story is based around a retired lecturer by the name of Karl Meyer. After the death of his dog and his wife leaves him, he feels lonely and quite lost with his life. He has a son, whom he is close to, but his son is married and his wife is expecting a baby. One day though, Karl starts hearing noises in his house. This concerns him, obviously. But he soon discovers that Jesus is in his home and he can physically see him and hear him talk. At first, he doesn't really believe what is happening. But he soon realises that Jesus is very much real and there with him. Karl worries about telling people around him in case they think he's mad. But nonetheless, he does tell people closest to him, like his son and daughter-in-law and close friends.

Throughout the book we read how Karl learns to accept that Jesus is there to help him and guide him through this difficult time in his life. We also get to meet Hans, a puppy which Karl acquires. The assumption is that Hans has been found wandering the streets. A little boy who lives nearby brings Hans to Karl asking if he knew who the dog belongs to. But Karl keeps the dog until if and when the owner arrives. But in reality, Jesus brought this dog to Karl to fill the void in his life.

We also get to see other miracles which Jesus performs on strangers and members of Karls family. This is confirmation to not just Karl, but to the people around him that Jesus is always there and is real.

I really enjoyed this book. I liked the idea that Jesus Christ actually came into someone's life as a physical human that you can see and hear. It's one of those stories that makes you think. I read Seeing Jesus before and really enjoyed that too. I felt I got to know Karl as a person and the struggles he was going through. He'd been dealt a lot with his wife leaving him and his dog passing away. But when Jesus comes into his life, he learns to re-evaluate everything and think about things in a different way. And with the little puppy, Hans, coming into his life, it gives his life a new perspective.

The book is easy to read and the chapters aren't too long, so it is easy to stop at a certain place and pick up again. I like the fact that there isn't too many characters in the book either. I sometimes think if there's too many people in a story it can be easy for the reader to lose their way and forget who's who. I didn't find that with this story though. I read the kindle version of this book, but found it easy to read. And it's not too long either, so it won't take you too long to read.

It's a book that is though-provoking and will leave you with questions of your own. Christians often tell you that Jesus spoke to them and guided them in a certain direction in their lives. As a Christian myself, I don't personally experience this but I know people in my Church that do. But it did leave me wondering how I would feel if I did see Jesus in the flesh. I think with anyone it would shake me and like Karl, would wonder if this is really happening. However, I would recommend this book if you like this type of book. I really enjoyed it and would give it 5/5. 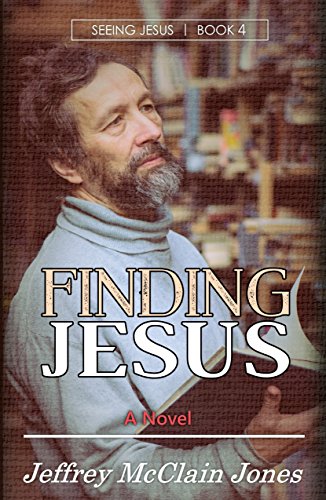