Frankenstein and the Railroad

There are so many things about the analogy of the railroad and Frankenstein that, as an English teacher, I applaud the first person to make the connection (although I don't know who that may have been). The novel by Mary Shelley is chock-full of themes that are analogous to the concept of the railroad reaching across the continent. For instance:

1. Dr. Frankenstein is heralded as the Prometheus of modern literature. Prometheus stole fire from the gods and gave it to man and was punished for it because of the havoc man created with it. Dr. Frankenstein also created something (the monster) by stealing human body parts and unleashing it on the world, and he, too, was punished for it. In the same way, the constructors of the railroad system, especially the "Big Four," created something tremendous and powerful and handed it over to the people of America, but many were punished in the process: the Chinese workers, the Indians, the ending of the mail system as it was known, the wage-workers during the depression of the 1870's, the morals of the UP camps (demoralization, if you will), etc. The railroads were fascinating and technologically advanced (just like fire or the Frankenstein monster), but they brought just as much bad as good.

3. A respect and awe of science and technology is prominent in the novel, also, manifested in the creation of the monster. Along the same vein, "the railroad was the key instrument in transforming the area from pre-industrial forms of economic activity to modern industrial technology." The coming-alive of the monster and the coming-alive of transportation of goods and people across the U.S. are definitely analogous to each other.

4. In Frankenstein, Victor states, ""Learn from me...how dangerous is the acquirement of knowledge, and how much happier that man is who believes his native town to be the world, than he who aspires to become greater than his nature will allow." Little did the railroad builders know, danger would be prominent in the building of this transcontinental navigation. Faulty construction because of the race-to-build-it-faster, an economic depression that would blossom into riots caused by the lessening of wages, thousands of minorities beaten or killed, danger in the building of the railroad itself (especially with the use of explosives), and even robbery by the infamous James brothers...all of these dangers are akin to the Frankenstein theme of "ignorance is bliss."

5. In Frankenstein's world, as in the world of the railroads, wealth and prosperity are lauded above hard work and stamina. The fraudulent ways that the railroads were funded and the controversy that surrounded the planning out and economic areas of the construction are just minor examples. The companies that prospered and the working men that were exploited are even more mind-blowing.

6. Lastly, although he was a monster, Frankenstein had a keen sense of humanity and understood much with sympathy. He was a monster with a heart of gold. In a similar sense, although the railroads had "monster, not monument" traits, they were essentially the heart of the west. "The late nineteenth century West was inconceivable without the railroad." The railroads were "the achievement of the age." They connected the East Coast to the West Coast, thus connecting the world all the way around, in a way.

Just as Frankenstein's monster was both to be feared and respected, so is the story of the railroad and what it brought to the United States. 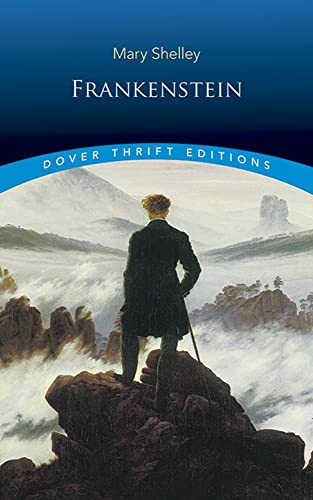