Funny in Farsi: A Memoir of Growing Up Iranian in America

Funny in Farsi: A Memoir of Growing Up Iranian in America authored by Firoozeh Dumas is written in the first person with a friendly, loving and humorous tone. This book reads as if Firoozeh is in the room with you relating her personal story. It is pro the United States and American citizenry. Firoozeh speaks highly of Southern and Northern California.

Funny in Farsi: A Memoir of Growing Up Iranian in America is mostly about an Iranian girl growing up in the United States during the 1970's and early 1980's. The author did include a few chapters about her college experience at the University of California in Berkeley, what it is like being an Iranian young adult and about her early years as a married woman.

Firoozeh Dumas begins her book with an explanation about how her father's occupation in the petroleum industry brought her family to the United States in the early 1970's. She elaborates regarding being seven upon first standing on American soil. Firoozeh shares humorously about being in Elementary School only knowing about seven English words. In her memoir, the author eloquently portrays how an Iranian family overcame cultural barriers, learned English, appreciated Disneyland, American Fast Food, and became an integral part of Southern and Northern California's society.

Firoozeh Dumas further relates how her French husband François Dumas and Firoozeh met. She diplomatically without animosity tells how her in-laws could not accept her because she was of a different religion and nationality. She further shares the joy about her two weddings, one Catholic and the other Muslim-Persian.

For those who enjoy learning about other people's stories (autobiographies or biographies), Funny in Farsi: A Memoir of Growing Up Iranian in America should be at the top of your "must read" list. This uplifting memoir was one of the best I have read. There was nothing dry or dull within its 198 pages. 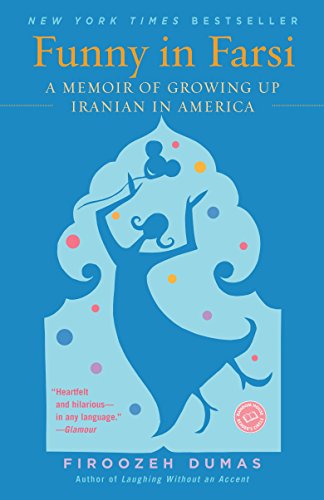 Funny in Farsi: A Memoir of Growing Up Iranian in America
Buy Now