Get ready for NaNoWriMo 2017

NaNoWriMo is the name given to the now Internationally recognised National Novel Writing Month. It is an event for writers that runs from the 1st to the 30th of November.

It was started back in 1999 by Chris Baty a freelance writer. In its first year it was run in July and only had 21 participants all of whom where from the San Francisco Bay area. Today there are writer's from all over the world taking part every year.

Writers are set the challenge of writing a 50,000 word novel in a month. There are no restrictions on the type or genre of the story, the only other restriction is the time constraint of 30 days.

It is a fun challenge for writers of all ages and abilities and the website is like a social network for writers during and even before and after November.

A lot of writers who decide that they are going to do NaNoWriMo do so a few months in advance and start preparing as early as they can.

These preparations could be as simple as making sure they have the right tools to hand before the start of November. However some writers start planning out story ideas in advance. This is allowed as long as no story is written down before the 1st November.

I like to use daily prompts for my attempt and so start looking at prompt and story idea generator websites in mid September to early October.

Another way to prepare yourself is to try and write a short story of between 1,500 and 2,000 words in one day. This is the amount of words to be aiming for each day to finish NaNoWriMo.

Steps To Get Ready For NaNoWriMo

No Plot? No Problem! Revised and Expanded Edition: A Low-stress, High-velocity Guide to Writing a Novel in 30 Days
Buy Now 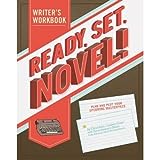