Gods of the Ancient Northmen

More about this and Georges Dumézil

The two introductions of this book written by C. Scott Littleton and Udo Strutynski are informative and detailed. I enjoyed reading those in the edition I have that was published "under the auspices of the center for the Study of Comparative Folklore and Mythology, University of California, Los Angles" (per the first page of Gods of the Anceint Northmen) in 1973.

More about Georges Dumézil is available on Wikipedia and in the about the author section in his published works. 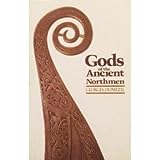 Georges Dumézil, a French comparative philologist, wrote and published in the late 1950's the book Gods of the Ancient Northmen. This is not light reading. This non-fiction work is very in depth. This author expertly eloquently used his field's jargon plus shares his expertise; allowing his readers a window into Indo-European Studies. This book is well written and worth the time spent reading.

Gods of the Ancient Northmen has 150 pages (short for its type). It is very informative. I learned much about the Indo-Europeans (also known as the ancient Germanic people). Dumézil refers to Tacitus and Julius Caesar; explores what they wrote about the "German" people which included most of Europe for the term "German" in ancient Rome did not mean the same as today (not just those living in what we call Germany). This work included the tribes prominent in Europe that resided north of Rome, from Bavaria to Scandinavia.

There are those who criticize Georges Dumézil work, but those who do, forget the time period that this man completed his research and was published. They do not take into account how much more we have learned about the Romans and Indo-Europeans since the 1950's in compatible fields to Indo-European Studies such as anthropology, forensic archaeology and archaeology. This author's contribution to Indo-European Studies is extremely significant and was pioneering for its time. This great work is a compilation of his research about the Germanic people found prior to his completing this book in 1958.

This non-fiction reference type of book is highly recommended for any one's at-home library. It is in mine. Enjoy!

5 stars for Gods of the Ancient Northmen

Learn more about the Indo-Europeans in Northern Europe