Gross Out Books for Kids

Kids absolutely love everything nasty and disgusting; it's especially fun when their enthusiasm for the "ick factor" drives parents, teachers, and any adult in sight to distraction. These books are not only completely gross but they are educational...in a disgusting sort of way.

Sometimes the easiest way to get kids reading is to give them something they are interested in. Gross is a pretty good guess for almost all boys...but girls love these books too!

It's Disgusting and We Ate It! True Food Facts from Around the World and Throughout History
Buy Now

It's Disgusting and We Ate It! True Food Facts from Around the World and Throughout History

Solheim appeals to the gross-out side of kids in this exploration of edible grub (larvae and otherwise) around the world, past and present, and it's more laughs than a barrel of monkey brains (the one delicacy he missed). Divided into three sections, the book begins with "People Eat the Wildest Things," a look at some of the less common foods eaten today, such as frog legs, earthworms, snakes, insects, flowers, and seaweed. "From Mammoth Meatballs to Squirrel Stew" considers strange fare from the past, such as a menu from a medieval royal feast in England (14 oxen and 50 swans, among other things), the rat stew eaten by sailors, and the robins popular in Colonial America. "If You Think That's Sick, Look in Your Fridge" takes a look at how many common edibles, such as milk, cheese, honey, and mushrooms, are grown or produced. Each double-page spread includes basic facts and lots of interesting trivia written in a wacky, off-the-wall style that children will love. There are also poems-amusing, tongue-in-cheek odes to unusual delicacies (a haiku celebrates sushi). Brace's cockeyed, whimsical illustrations, done with colored pencils and acrylic paints, are delightful. The pages are filled with colorful characters who make wry observations about the text. Fact-packed fun from beginning to end.

Oozing with a whole new kind of fun, The Everything(r) KIDS’ Gross Puzzle and Activity Book is simply rotten with weird and wacky facts, mazes, puzzles, and activities guaranteed to keep you entertained for hours at a time! Puzzle through weird animal behavior, get the scoop on amazing body defenses, venture behind closed bathroom doors, and have a blast with funky food experiments!Plow through slimy, smelly fun as you: Unscramble letters to get to the bottom of bad breath Chomp away at edible ear wax Lose your lunch with fill-in-the-blank word play Wind your way through a buggy sandwich Match snake shapes with their most recent mealsThe Everything(r) KIDS’ Gross Puzzle and Activity Book is packed with tons of exciting factoids and puzzles to keep you entertained for hours!

Fascinating…Unbelievable…Gross! These are just a few of the responses readers will hear when they impress their friends with facts from the quirky new book of body trivia, Why You Shouldn't Eat Your Boogers & Other Useless or Gross Information About Your Body by Francesca Gould.

The Ultimate Everything Kids' Gross Out Book: Nasty and nauseating recipes, jokes and activitites
Buy Now

Gross and Disgusting Things About the Human Body

Gross and Disgusting Things About the Human Body

The human body may be a wonder of natural engineering but it also can be pretty gross and bad-smelling. In this fearless little book, find the answers to such profound questions as why are boogers green, why do farts smell, and where does belly button lint come from? Dare to read on!

Micro Mania: A Really Close-Up Look at Bacteria, Bedbugs & the Zillions of Other Gross Little Creatures That Live In, On & All Around You
Buy Now

Micro Mania: A Really Close-Up Look at Bacteria, Bedbugs & the Zillions of Other Gross Little Creatures That Live In, On & All A

A HUGE look at a very small, very amazing world! Here s a big treat for every kid who loves the squirmy, icky, buggy, and the generally gross. Sensationally designed, with eye-opening, jaw-dropping photography, MICROMANIA takes a close-up look at a world that s mostly invisible to us. It s an amazing universe that comes into astonishingly large-scale focus on these spectacular pages which showcase everything from luminescent furry green bacteria and flowerlike virus cells to maggots, mold, and more. But this is more than just a collection of mind-blowing images; it s solid science that encourages children's natural curiosity. They'll find out about the great scientists who discovered the existence of microbes, see how bacteria travel and reproduce, peek at some of the insects that make themselves at home in our kitchens, bathrooms, and bodies, and learn why some germs are good and others make us ill and what we can do to stay healthy. By the time they ve finished taking this voyage through nature s miniature universe, kids will fully understand why even the tiniest of creatures from foot fungus and salmonella to blood-sucking bugs and organisms squiggling in a pond near you can have a really big impact on our lives. Sidebars throughout go into depth on a variety of entertaining topics, including flea circuses and whether or not dogs or humans have cleaner mouths. Plus, there are really cool hands on activities for extra fun!

Gross Me Out!: 50 Nasty Projects to Disgust Your Friends & Repulse Your Family
Buy Now

Gross Me Out!: 50 Nasty Projects to Disgust Your Friends & Repulse Your Family

Kids absolutely love everything nasty and disgusting; it's especially fun when their enthusiasm for the "ick factor" drives parents, teachers, and any adult in sight to distraction. Now youngsters can indulge their lust for the foul with 50 wonderfully repulsive projects (illustrated in color for that extra POW!). The repellent journey starts with the stinky, scaly, slimy side of the human body. Children will meet the critters that live under their skin and fingernails, learn what causes those embarrassing sounds and smells, and make (very convincing) fake blood to throw Mom into a panic. They'll cook up impressively scary gangrene fingers from marzipan; whip up "booger bath," and grow a gross mold garden. To end this salute to the truly nauseating, there is a special "You're Gross and You're Proud!" celebration. 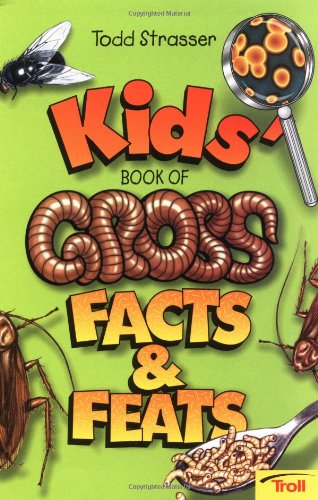 From microorganisms living in people's mouths and dust mites sleeping in their beds to sun-dried maggots for dinner and white ant pie for dessert, this fascinating book will have kids freaking out friends and family everywhere.

Oh, Yuck! The Encyclopedia of Everything Nasty
Buy Now

Oh, Yuck! The Encyclopedia of Everything Nasty

Beginning with a warning that "this book is downright disgusting," Masoff presents a delightful compendium of facts about things that are gross, putrid, and stomach turning. Covering more than 50 topics from A to Z, she reveals the truth about some unsavory mysteries of the human body, such as acne, body lint, eye gunk, farts, halitosis, snot, and vomit. Odious creatures such as cockroaches, lice, maggots, rats, and slugs are also discussed. Other subjects include "Cannibals," "Gross Grub," "Mucky Medicine," and "Toilets." Ranging from a couple of paragraphs to several pages, the entries offer a great deal of information in a hilarious tongue-in-cheek manner. The author also provides pronunciations and definitions, historical perspectives, and advice on how to deal with each of her revolting topics. Amusing cartoons and well-chosen, black-and-white photographs with humorous captions support the text. A section of "X-Periments" (e.g., build an exploding pimple, mix a batch of make-believe mucus) makes an appropriate conclusion to the book. Guaranteed to improve the quality of the lunchtime chatter of all but the most squeamish, this delightful volume will be enjoyed by fans of grossness everywhere.

Gross Universe: Your Guide to All Disgusting Things Under the Sun
Buy Now

Gross Universe: Your Guide to All Disgusting Things Under the Sun

This lively title is for children who love stomach-flipping facts, most of which are connected to the human body. Whether describing the mites that live on dead skin or in the nose and around eyelashes or maggots that clean out pus, the information is presented in a witty manner that is sure to keep readers turning pages to discover more. Additional details are provided by cartoon characters named Scientist A and Scientist B. Puns and wordplays abound as the text reveals tidbits about dandruff (complete with a shiny black "Dandruff Landing Pad"), ear wax, tooth scum, and digestive difficulties that are unsuited for polite conversation. Chapter headings include "Sickening Skin," "Hideous Healing," "House of Wax (and Other Leaky, Oozy Things)," "What a Gas," and "V Is for Vomit." Szpirglas proves that gross facts are cool, and the book may just convince kids who think science is boring to take another look

Stink-O-Pedia: Super Stink-Y Stuff From A to Zzzzz
Buy Now

Where can you view the world’s oldest ham? Who holds the record for the world’s loudest burp? The answers to these and many, many more essential questions can be found in Stink-O-Pedia — just the sort of reference book that Stink Moody, who reads encyclopedias in his spare time, might make up himself. From J-for-Jawbreaker (and how long it would take an average frog to digest one), to P-for-Professional Smeller (and other strange but true careers), to Y-for-Yeti (why not?), this volume contains enough amazing stuff to keep readers saying "No way!" for a googolplex* of years. At the back of the book, facts are cross-referenced with related Stink and Judy Moody titles.