"Her Last Goodbye" by Melinda Leigh - A Personal Review

Morgan and Lance are back at it, working a missing person's case. When Tim asks them to help locate his missing wife and mother of his children, Morgan and Lnce begin to try to find out if his wife left on her own as some people believe or if she was abducted. As they find clues leading them to believe she has been kidnapped, things begin to take a turn for the worse. Putting herself and her children in danger, Morgan has to think quickly and try to be rationally before anything else could happen. With Morgan and her family having to go through so much, including possible threats, Lance finds his own instincts kick in and he longs to protect them all as well. They have to try to solve this case quickly before anyone else goes missing or gets hurt.

Get your copy here! 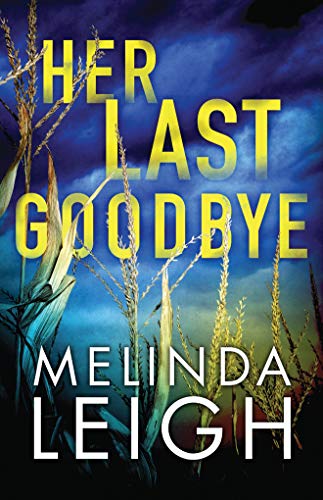 As with any mystery, it is amazing to have that suspense with a tad bit of danger. After all, the excitement is in the wondering who did what and what may have caused an event to happen. However, Her Last Goodbye is more than just that. It allows the reader to see into some of the worries and dangers it is to be a parent, how romance can lead to vulnerable states of mind (which we all know can lead to some acts of intimacy), as well as how some people have some complicated views on how a relationship should work. It was even more shocking and terrifyingly real than the first book in the Morgan Dane series. I found myself ridden with anxiety, fear, and concern through out the book. Having so many difficult situations to have to sort through and ideas, I found this book hard to put down, even when it got too intense to keep reading at the moment.

First of all, Morgan having three children is always nice to see. With her concern about her children's livelihood always about her, it wasn't hard for her to connect with the missing woman, Chelsea, who was a mother of 2 small children, and how she wasn't likely to leave her children that she adored so much. It was, however, rough for her to try to come up with clues and facts to prove that the woman just didn't run away from her family. To see Morgan struggle through that idea and then to end up having her own children threatened on multiple occasions by a variety of men, only made things worse. I found those parts exceptionally hard to read. Having a child myself, I don't think I would have been as rational or as brave as she was. Just the thought of the things she went through and the ideas of a mother just abandoning her children, has me shaken. Even though, as stated in the book, mothers sometimes do strange things like that, it still isn't easy to process or understand. Then to watch a mother go into Mama Bear mode to protect her own, kept my own mind whirling. I like to think I would do anything to protect my daughter, but my own problem with conflict would have been enough to make sure I got out of whatever situation that would put me in that rough spot. It had fuel Morgan even more though. She pushed harder to find and get rid of the person behind her own children's danger. This only makes her even more loveable. It is actually inspiring to have such a strong woman character, who would do anything to protect her loved ones. I can't help but feel more drawn to her in this book, and I feel that my admiration and love for her will grow in the future. Even so, I still found a lot of other disturbing things within the story.

We all know that there are people out there who believe women should be completely submissive to men, but it was still really hard to read and stomach a character who had this belief. To kidnap, condition, and even train another person seems extremely harsh, yet a they existed. I found it harder to read how they would torture another human being to break their mind and their spirit, just to train a woman to think and be something they weren't. Especially when said person was supposedly in love with their prey. I did find it inspiring on how, even being tortured, a woman can overcome it and try to escape and get back to her family. In fact, the thought of her family propelled her and kept her trying to get back home. It really made me happy to see that family was her motivation. Though, it was rough to get through, it made me wonder how many women could go through what she had and still find the courage and strength to keep trying to figure out a way to escape and get home. Even though, it was clear she was traumatized, it was clear she was more concerned with getting home to her children than how she could be caught and tortured and punished for trying. I found this to be a pleasant idea to have about someone who was captured. After all, wouldn't you end up within just a few days of being hurt over and over, give up and just conform to whoever was trying to condition you was ways? I probably would have. But this woman character definitely shed some light how nothing else mattered where your family is concern.

I found how strong feelings for someone and their family can really change how you view things to be a nice delight. I hadn't expected Lance to end up falling for Morgan's children the way he did to happen. It had been hinted that he loved and wanted a relationship with Morgan, but to see him fall in love with her girls and want to protect them as much as Morgan did, was really a pleasant sight. I know there are men out there like that, but its still rare and to see how his love for Morgan ends up extending to her children was just the right about of sentiment and love the book need to keeps things from going overboard. I enjoyed how he tried his best to make sure her girls were safe and even let them into his house to keep them protected, to be exhilarating and touching. It is always nice to have some wholesome love and concern to help break up some of the tension in a storyline and Leigh's way of adding this to Lance's character was a nice call. It helped keep the danger presented while showing a parental side to Lance and offering up how your friends and potential lover's can easily adore your children as much as you do.

Overall, I would rate Melinda Leigh's Her Last Goodbye 5 stars out of 5 stars for how well written and emotional filled the book was. It could stand alone as it gives refreshers on what happened in the last book, as well as had its own storyline. Though, the character developments increased and they continued to grow through out the story, the reader wouldn't feel like they missed a whole lot by reading this book first. I have to say that has to be something that is delightful. After all, wouldn't is just bite if you had to read the first book to even think about picking up the second. Sometimes you don't always realize what you are grabbing and having a series that has books that could stand alone if they needed to, makes it so much easier to start by whatever book you happen to pick up first. I definitely recommend this book to all our thrill seekers. Its not for the faint of heart, but is still extremely excellent to read.