Herbs of the Sun, Moon and Planets is a new book published by Moon Books

Cover of Pagan Portals: Herbs of the Sun, Moon and Planets

You may well be wondering how there can be herbs of the Sun, Moon and Planets, apart from this planet where we live and plants can grow? The answer is that the herbs in question do not grow on these heavenly bodies but were believed to be ruled by them according to ancient herbalists, like Nicholas Culpeper, who assigned the plants to astrological rulers and being under the dominion of the deities associated with specific planets.

Herbs of the Sun, Moon and Planets is the latest book by Steve Andrews and has been published by Pagan Portals, an imprint of Moon Books/O-Books.

It will follow the success of Herbs of the Northern Shaman, which has recently passed the "sales barrier" of selling more than 500 copies on Moon Books.

Herbs of the Sun, Moon and Planets will have seven sections, each including seven herbs, and there will be an explanation of the characteristics of the planetary rulers were believed to fit with the herbs in question.

The author wishes to make it clear that he doesn't believe that herbs are really ruled over by deities and other planets but it makes a fascinating study, all the same.

Herbs of the Sun

The Sun is, of course, the source of life-giving light that enables life in this Solar System. Herbs that were said to be ruled by it had some characteristics associated with the Sun.

The Sunflower (Helianthus spp.), with its golden-yellow petals that radiate out like the rays of the Sun made it an obvious candidate for being assigned to the herbs of the Sun.

Chamomile (Anthemis nobilis) is a popular herb used for making herbal teas and in shampoos to lighten the hair. It is regarded as a herb of the Sun because like the Sunflower it has petals that radiate out from around a yellow disk in the centre.

The bright yellow St John's wort (Hypericum perforatum) was also said to be ruled by the Sun. It fits well under the dominion of the Sun because this herb is known for its antidepressant properties.

Herbs of the Moon

Herbs of the Moon were assigned under this heavenly body's rulership because they had something to do with the night about them. Or maybe because their leaves or flowers were round like the Moon, or perhaps because they were silvery-white in colour.

The water lily (Nymphaea alba) has rounded leaves and a white flower. The lettuce (Lactuca spp.) with its white sap caused it to be included in herbs of the Moon.

The jasmine (Jasminum) was another herb believed to be ruled by the Moon. Perhaps this was because jasmine bushes can have white flowers, and their perfume scents the air at night?

Mercury was thought of as the Messenger of the Gods. Herbs of Mercury had something about them that really communicates.

Fennel (Foeniculum vulgare) is included in the Herbs of Mercury, and maybe this was because it communicates to our eyes and sense of smell with its delicate feathery visual beauty, and its delightful aroma of anise.

The Mandrake (Mandragora officinalis) with its weird roots that have been likened to the legs of a human being, and its hallucinogenic properties that have earned it a place in witchcraft, as well as placing it in the herbs of Mercury.

Venus was the Goddess of Love. She is associated with love and sensuality.

Not surprisingly the Rose (Rosa spp.) is included in the herbs of Venus. The flower of the rose has long been associated with romance and passion, especially the red rose.

The Vervain (Verbena officinalis) is included in the herbs ruled by Venus too. This dainty herb with tiny lilac-coloured flowers has soothing properties and has often been used in herbal medicine. The ancient Romans associated this herb with the Goddess Venus.

Mars is also known as the Red Planet, and Mars is the God of War, so herbs associated with this planet and deity have to have something aggressive about their appearance or properties, or red colouration like blood, in their flowers, fruit or sap.

The Dragon Tree (Dracaena draco) fits the bill well as a herb of Mars. Its sap turns dark red as it dries and is known as Dragon's Blood. The tree has spiky leaves like swords or daggers and its berries are an orange-red colour.

The Buttercup (Ranunculus acris) is another herb of Mars, though perhaps why it was included under this planet and god's dominion is not at first obvious. It is because this pretty plant with bright yellow flowers has a very acrid sap that can burn the skin if handled causing blistering and inflammation.

Why the Dragon Tree is a Herb of Mars

Buy Herbs of the Northern Shaman on Amazon

Jupiter is one of the giant planets and is associated with expansion, exploration and also with luck.

The Lime Tree (Tilia europea) is a herbal tree that comes under the dominion of Jupiter, possibly because of its spreading branches and winged fruit that are carried by the wind to reproduce the plant where luck may take them.

The weird-looking Thorn Apple (Datura stramonium) with its spiky seed-pods and dangerous hallucinatory properties is also included in the herbs of Jupiter, possibly because of its other-worldly looks, possibly because its seeds germinate wherever they fall. It is a very poisonous plant but has been used to cause hallucinations and in witchcraft and in tribal ceremonies and initiations. It is included in Herbs of the Northern Shaman as well.

Saturn has been thought of as the "Grim Reaper" of the planets, and perhaps aptly this planet has many very poisonous herbs associated with it and its dominion.

Deadly Nightshade (Atropa belladonna), Henbane (Hyoscamus niger) and Hemlock (Conium maculatum) are all said to be under the astrological dominion of Saturn and all can kill if consumed.

Herbs of the Sun, Moon and Planets 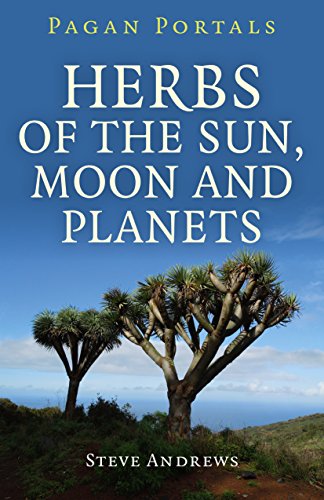 Herbs of the Sun, Moon and Planets published and gaining reviews

Herbs of the Sun, Moon and Planets has been published. It has been available from 27 May, 2016. It is advertised on Amazon. An online course is planned as well, hopefully with video footage filmed at Kew Gardens where the author will be actually showing you the herbs on camera, which is an excellent way of learning how to identify them. Additional info will also be presented with the course.

The author is planning to be making public appearances to promote his new book and is booked as a speaker at The Mediterranean Garden Show event.

Herbs of the Sun, Moon and Planets is intended as a gateway into the wonders of the world of herbs, one part of the amazing natural world all around us!

The book is already getting some great reviews. Here is a link to one posted in a bad witch's blog.