An avid reader who shares her love of books and their contents with others.

Hounded by Kevin Hearne is a wonderful tale revolving around a druid, long past his due date. It is a story with passion, comedy and action. In fact, what’s more amusing than an Irish Wolfhound who loves sausages and French Poodles? One of the characters, is just that and helps alleviate tension in the story. Hounded is the first book of the Iron Druid Chronicles, and it couldn’t have been better in introducing the main characters and helping flush out some of their details.

Atticus is a druid and has been for his long life. Its a wonder how he could live so long with a God after him, all because of a sword. Atticus has a Irish Wolfhound named Oberon, who is absolutely delightful. Oberon is a great source for comedy through the story. With mentions of French poodles and how many he deserves, or thought of food and hunting, it becomes hard not to love him. It is also clear on why Atticus loves him, In a world, where he must hide himself and his true nature, it is always lovely to have a friend you can rely on. For a druid, I feel Hearne picking a canine to be Atticus’ friend was a great way to introduce some comedy, in those scenes that can be a little intense or anxiety inducing.

That is not to say Atticus isn’t funny. Atticus, who has seen more than any of us could ever want to see, has a bit of a sarcastic streak. In fact, his inner monologue, when dealing with beings of power, can sometimes break that edge. However, where Oberon fails at intensity and with problem solving, you find that in Atticus. There are reasons one stays alive for as long as he has. Though, Atticus is forth coming early on with his bargain with the Morrigan, a Goddess whose play ground is a battlefield, it still leaves much to the imagination, especially when you head about the old feud with a God. The God is so hell bent on retrieving a sword in Atticus’s possession, you can help but wonder what all does Atticus have up his sleeves.

“You will respect my authori-tah!' Oberon said, in a passable imitation of Eric Cartman. I reminded him that I needed to concentrate. Sometimes dogs forget; they just get too excited.”

Watching Atticus learn of enemies, under his nose, deal with human authorities and make new allies, was definitely an adventure. So many people giving information to Atticus was hard to determine what was friendly and what was a devious plan. For example, when a witch asks for a specialty tea to help fend off a God love, who is the very same God that has a major issue with Atticus, things seem suspicious. But then a witch from the same Coven seems to be super friendly and fairly forthcoming with information, makes you want to trust that Coven. Hearne was very good at keeping the reader guessing about who was friend and foe. Especially among the Goddesses and Gods, when they handed out information, that could be helpful or devious act to lure Atticus to his death.

In the end, good prevailed, after all what else could you expect from the first book in a 9 book series. Though, I feel that there ended up being more wondering about Atticus and his past and how it will affect the books moving forward. It was oddly satisfying with so many different aspects covered in it. There was magic, Gods, shapeshiftters, Fae, witches and s many other things, it leaves the reader what won’t be covered moving forward.

Hearne had written the story beautifully and it flowed with such grace. Though, it seemed some parts were shorter and I felt it could’ve been drawn out a bit more, for entertainment purposes. I loved the use of the characters and how each had a part and not like a one time appearance, For example, the mention of his paranormal lawyers. At first, it didn’t seem like they would be super important, but as you read, you find that in Atticus’ position, they are irreplaceable, It is easy to find things to love in this story. I couldn’t find anything to really complain about, minus the ending of the book, where the action seemed to take place. I definitely wanted a little more drawn out, maybe a little more action, but it wasn’t completely unsatisfactory.

I believe Hearne set up the series this way to make sure we stuck around for the series. I am already in love with Oberon and Atticus and can’t wait to see future adventures with them. My favorite character is Oberon and I am praying he gets a lot more action and conversations in future books. I am not saying I didn’t love Atticus, but I think with Atticus’ personality, he might have been harder to love without Oberon there. 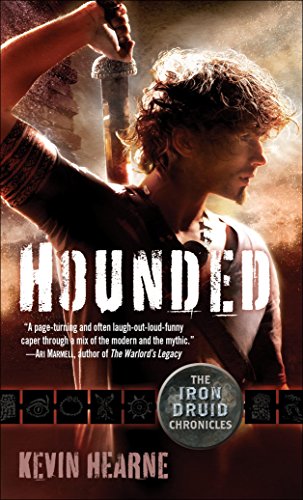 I first heard of the Iron Druid Chronicles from my dad, who listened to the Audible versions of them. And though I had liked some of what I had heard in small car trips, I don’t like listening to books. So when I finally decided to pick up e-book copies, I was quite interested in what I would see. Sadly, it is not on Kindle Unlimited, but you can still purchase them on Amazon, hard or digital copy.

If you are into fantasy and looking for something that hits on old beliefs, gods and goddesses, without over romanticizing everything, I definitely recommend Hounded. As I stated earlier, Hearne seems to know or have some understanding about what is in his story. He creates elaborate problems for the characters to overcome and definitely creates an air of mystery that keeps you from having everything figured out before the characters do, which was pleasant. I am pleased to say, Kevin Hearne has obtained one more fan, for now. We shall see moving forward.