How To Read Hemingway: The Snows of Kilimanjaro & Other Three Stories

Paul Joseph is a popular freelance journalist and column writer. He is famous on the internet for his matchless poetical language and style

1. The Snows of Kilimanjaro: A Matter of Money & Women

Hemingway’s story The Snows of Kilimanjaro reflects the aches of a writer who knows that his career is going to end halfway. In broader terms, the story is a reflection of the pains Hemingway faced in his career life. He experienced a moral vacuum when he had to alienate himself from the church. Also, he had serious concerns regarding his existence because he feels in this entire story that money and women can ruin the life of a writer.

In the story, the plot is narrated in a simple manner while the flashback that takes place in his mind is written in italics. An exception is the imagined airplane ride which is in regular print though it is not the imagination of a dying brain.

The story revolves around the encampment in Kilimanjaro in Africa. The noticeable thing is that the whole story contains hostility evident in dialogues between Harry and his wife. Throughout the novel, Harry expresses dislike and disinterest. He says “Can’t you let a man die as comfortably as he can without calling him names?” However, his wife responds, “You can’t die if you don’t give up.” Thus, one can see that in sharp contradiction with Harry, his wife expresses hope.

Realization leads Harry to frustration, and it comes out in the form of hostility towards his wife

In the entire story, the central theme is that of self-realization. As a writer, Harry expresses disinterest towards his wife though he admits it is not her fault that he is in trouble. He laments, “Love is a dunghill, and I am the cock that gets on it to crow.” And after some time, he claims, “I’ve never loved anyone else the way I love you.” Harry is expressing the idea in an indirect way that his writing career is ruined as a woman lures him. However, the situation forces him to slip “into the familiar lie he made his bread and butter by.” Thus, one theme is that love and women can ruin a writer.

The second main theme he expresses is that money ruins the career of a writer. Harry thinks, “but he would never do it, because each day of not writing, of comfort, of being that which he despised, dulled his ability and softened his will to work so that, finally, he did not work at all.” This realization leads to frustration, and the frustration comes out in the form of hostility towards his wife through words like “You rich bitch.” Here again, Harry realizes desperately that “Your damned money was my armor.”

Throughout the flashbacks, one can see the poetic style of Hemingway. There is a “cool night” and “rose-petal” skin. Also, Hemingway uses similes appropriately. He sees “snow as smooth to see as cake frosting and as light as powder,” and he drops down “like a wind.”

The hero in the story, Harry, realizes that he lost his job as he faces death and expresses disdain and disinterest. However, it is not possible for him to survive without these two.

2. The Old Man at the Bridge: Sense of Duty Is An Impediment

The story The Old Man at the Bridge deals with the theme of the sense of duty. In the story, an old man and a soldier met at a bridge. The old man strongly believes he must watch over his four doves, the cat, and two goats he has in San Carlos. So, even when all others leave due to the artillery fire, he still hesitates to leave his animals. In other words, even death is not able to force the man away from his sense of duty.

Very similar is the case of the soldier who has reached there to evacuate the entire place for overall success in the war. The soldier is firm in his belief that he must do what he is ordered to do. Though he realizes that the old man is too weak and fragile to escape without help, the soldier does nothing to help him other than saying “This is not a good place to stop…If you can make it, there are trucks up the road…”

Thus, one can say that the tone of the story is a sense of duty and sympathy which contradict throughout the plot. Taking a neutral stand, the writer leaves it for the reader to evaluate as to who is a better person. The soldier must evacuate the place immediately. Though the feeling of sympathy influences him considerably, he decides to suppress the feeling since duty is more important for him.

Both characters stick to their duty. The old man feels he must “take care of animals” and hesitates to leave even when there is a danger to his life.

Hemingway’s distaste for love is again visible in the short story A Very Short Story. He states in his story “The Snows of Kilimanjaro” that “love is a dunghill.” The same theme is elaborated in the story “A Very Short Story.” The short story is about the love affair between a soldier and an Italian nurse during a war. However, after the marriage, the relation disintegrates.

It is evident from the beginning of the story that they were in deep love and that they wanted to get married. Then he went back to the war, and Luz wrote him many letters which he received much later. However, the obvious point here is that though he was at the war front, her letters were all about the hospital and how much she missed him at night and how impossible it was for her to “get along” without him. However, after the armistice, she disagrees to go with him though it was really “impossible” for her to live without him. The decision was that she would not go with him “until he had a good job.”

By this time, the reader gets a clear picture of what Hemingway indicates about the hollowness of the love Luz shows. She writes him many passionate letters when he is away but she decides to stay away when he is back, and they even quarrel about this subject. However, he is altruistic. He decides to go back and find a job immediately. Soon after he leaves, she makes love with an Italian major, and it is ironic here to note “she had never known Italians before.” Again, irony comes in the fact that she “believed in him absolutely. She knew it was for the best.” The shattered hero decides not to communicate and, evidently in depression, depends on prostitutes.

Hemingway presents his hero as a real lover and the heroine as one who never loved him. He writes very less and speaks decidedly less about his passion for her but does everything she demands to marry her. On the other hand, she talks a lot about how much she loves him and how much the girl misses him, but she feels no guilt in making love with an Italian major whom she had never known before. Even after that, she feels no guilt in what she does and expects the hero forgive her. Besides, she “believed in him absolutely.”

Thus, the story “A Very Short Story” by Hemingway is similar to his “The Snows of Kilimanjaro” in the fact that in both the cases, the writer brings the theme that love is nothing but a “dunghill.” Also, the ones who are altruistic in love are the ones who are hurt more. In this story, the altruistic hero suffers as a result of the girl's hollow love and pretention, and in “The Snows of Kilimanjaro,” the heroine suffers as the hero hates her presence for ruining his writing career though he is addicted to her.

Another exciting story from Hemingway comes in the name Hills Like White Elephants. In the story, a couple is waiting for a train at the railway station. The conversation between them makes the reader realize that the man is forcing her to do an abortion though she dislikes to do it. The most exciting thing about the story, like the other stories already discussed, is how Hemingway portrays the complex nature of women.

In the story, one can see the use of symbolism in perfection. An example is a curtain which is “made of strings of bamboo beads.” The bearer comes from the other side of the curtain with drinks time to time. Admittedly, this curtain indicates a covering up, showing how the woman is covering up her real thoughts through counter questions. Another example of symbolism is the hills as “white elephants.” “White elephants” indicates a newborn baby as is clear from the fact that the woman is happy seeing them. However, the man does not like to look at them.

Even though the woman does not like to continue the conversation on the subject, the man is adamant about keeping it. He tries his best to convince her about his point of view, but she is not willing to say her real thoughts. Instead, she uses her counter questions as a “curtain.”

Also, one can see how effectively she manages to hide her emotions. See the line, “the girl smiled brightly at the woman, to thank her.” Even with a lot of tension in her mind, the girl behaves as if there is nothing wrong. Finally, when the man asks if she feels better, she responds, “I feel fine.”

In total, the paradoxical nature of females and the volatility they show is the central theme in all the stories. All the female characters have very complex traits; they think one thing, say something different, and again act in another way. Thus, the male characters often get perplexed by the complexity of their behavior. Another theme is the hollowness of love. The feeling of insecurity in love is visible in these stories. While some are altruistic, some do not love the person. Instead, they love money and beauty. The general tones of the stories range from sympathy, sense of duty, hopelessness and so on. 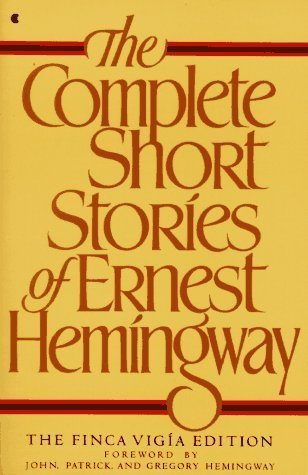 Paperback:The Complete Short Stories of Ernest Hemingway (Finca Vigia Edition)
This is the only book I would suggest someone who is interested to read the stories of Hemingway. If you have a collection of classic literature, this book will add to it.
Buy Now