What Will End the World?

In the 2010s - 2020s we face overpopulation, flying to the moon to gain new resources and living spaces, proliferating substance abuse, political confusion, climate change, solar changes, a renewed nuclear threat breaching into Iran, and whatever else is around the bend of time. What or who will finally put an end to Earth and will it be sooner or later?

Hubber W. R. Shinn is excited about his first installment in his Jake and Rebekah series. Entitled Jake's Final Days, it recounts Jake's life after he and his wife move off the grid to escape the turmoil of society as well as the plagues and tribulations of Earth's last days in World War III. While several science fiction books and television programs have portrayed a nuclear third world war, this novel is the first in my experience to describe the vivid life-and-death trials of living off the grid at such a time combined with the relief of separating oneself, even temporarily, from devastation provides.

My copy of Jake's Final Days is a hardback edition from WestBow and a high quality book that I would expect from a Thomas Nelson division. This was good to see, from the outset of reading. Books received from self-publishing houses or publishers "on demand" can be of lesser quality and sometimes - not always - the material inside matches the quality of the cheaper cover. This book is better quality outside and inside.

The book is endorsed by Pastor Troy and wife Lori Lanham of the Edgewater Christian Fellowship Church in Biloxi, Mississippi. However, this is not an indication that readers must be Christian in order to enjoy the story. The novel is one that contains action, adventure, and bloody gore and death as well as escape and redemption from disaster.

Readers that are not Christians might be taken aback by the religious exclamations of believers in the story, but these are the proclamations and prayers we usually hear from the newly converted, people that have come close to disaster, or folks among the long-term committed to faith. An interesting fact is that when I review a film, these exclamations are listed under the profanity category along with, well, profanity, because they can upset some non-believers and we want everyone to be cautioned about movie content; that's why people read the reviews. The story contains some mild cursing as well, which is a reality of the situations occurring.

Believers will probably be exclaiming right along with the characters in this book.

Jake and Rebekah invest many months of preparation into moving first from Clearwater, Florida into Tennessee and then to the top of a mountain in the central state and an off-grid mountain cabin.This was likely somewhere along the Highland Rim outside the Nashville-Murfreesboro Area in the Central Basin below the rim.

It was a load of work to move and prepare to one's own energy supply, but the scenery is gorgeous and the air still clean at the top of a mountain, with a peace in the atmosphere. The couple is thankful to have this spot away from the spreading corruption of society and the disasters of a new world war. In fact, Jake's former life had led him into nearly a hundred activities and events from which he should have emerged dead, but survived.

The outside world is intolerable by this point at the cabin, people killing one another for food, gasoline, and other daily necessities. The world is worse than a laboratory box with too many rats inside, this time each armed with a gun, a bomb, or a knife. The timeline must be near Armagedden, else Earth has created her own end. 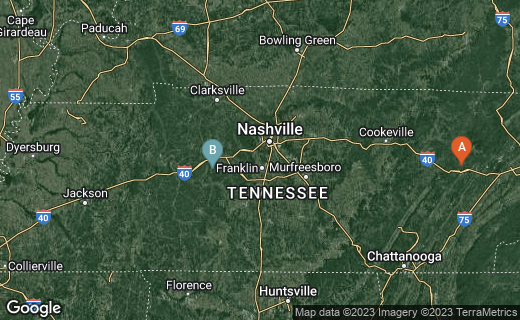 A highlands area for reference.

Problems begin at the cabin almost immediately once Jake and Rebekah create a sort of routine of generating hydroelectric power of a sort, fishing, and filling their time with raising chickens, building, and pursuing faith-based activities. The electricity goes out and Jake goes out to fix it, not turning off the system first. This is a sure step toward disaster and no other humans are nearby. Bear visit regularly, though.

A domino effect started by a power a bit stronger than the action of the butterfly's wing is unstoppable. It cascades in a dark avalanche, but does not destroy the couple's relationship.

One element of this story I appreciate is the partnership between Jake and Rebekah, both severely injured, but each helping as the other becomes temporarily weakened. Non-believers and believers can all enjoy witnessing that equality of companionship.

Jake attempts to repair the electricity without enough safety precautions, suffers electrical shock, and Rebekah runs to save him. In doing so, she is severely injured, making one shoulder, arm, and leg nearly useless while her head is bleeding profusely. Through the next chapters and a chain of unwanted events, Rebekah and Jake clean and bandage each other, surviving where readers expect them to die. One event after another diminishes their quality of life, but the quality of their relationship and faith do not decline, even through pain and devastation.

During the times of sleep - and unconsciousness caused by pain and exhaustion - Jake experiences Vivid Dreaming in which he is an observer as well as a participant in previous events that should have killed him.

We see a small boy riding on a crumbling piece of ice in Lake Michigan and hear the splash as he goes under. We see the images of a strange LSD trip with something extra.

Car crashes, drunk driving, ghetto beatings, drug binges - it's all happened to Jake, but something pulled him through. The descriptions of these and other events are lifelike and the images crafted to describe the mountaintop are nearly photographic.

The climax of Jake's Final Days is hopeful and a bit dreamlike itself to some readers, but no more dreamlike and hopeful than the final chapters of Dean Koontz's The Darkest Evening of the Year. If a wide range of readers can enjoy it, then they can also enjoy Jake's Final Days. Koontz's Odd Thomas Series books are dreamlike as well, and if they are popular, why not a book based on more real-life events leading up to an ending that is a transition?

Even some of Christian writer C.S. Lewis's books include events that are dreamlike - or nightmarish. Readers will likely wish that such a couple as Rebekah and Jake are not really reaching their final days in the last chapter of Mr. Shinn's book.

Another in the Final Days series is at hand in the future and I look forward to reading it as well.