Incessant Houseflies - The Scourge of Beelzebub

It was a beautiful day. The sun warmed the air and color danced on the sunbeams which filtered through my kitchen windows. The scene was idyllic, (you know, the kind of stuff you write books about).

Then, literally out of nowhere a big, ugly green-winged, red-eyed house fly forced his or her (How do you know what gender a fly is, and who really cares?), way across my vision! So ended the idyllic scene.

As I focused on that fly, I noticed there was not only one in my vision, but there were a "bunch" in my kitchen. My kitchen windows, all three of them had been invaded by houseflies.I hate flies! Flies, common nasty houseflies!

Where had they come from? The kitchen was clean. There were no dirty dishes, no over ripe fruit, no smelly trash, no sticky floors, and, no pungent odors.

Why were they here?! What did they want with me?! I have a big backyard, they should be outside!!!

These are the questions I asked myself as with firm resolve I swatted fly,(blam !) after fly(pow !), after fly (splat !), after fly, (got-cha !). There were too many to count. I went from window to window, 20 flies here, 10 flies there, dying as the pulp of my weapon smashed each against the pane. The rolled-up newspaper tearing and changing colors as the pressure from the impact and internal juices of the flies left their mark.

Where are all of these flies coming from!?

Although my weapon faltered I never did. With fierce determination more newspaper was rolled and formed into the ultimate fly killing machine. I was a force to be feared! (note to self: buy insect spray!) What's this? Some flies in a futile attempt to escape inevitable death faced in the kitchen are moving to the living room and dining room windows. This is a plague.

Although out-numbered; I am not outsmarted. So, I swing with the tenacity of a pit bull whose teeth are sunken deep in his enemy's leg. I press on connecting regularly with another soon to be dead housefly.

Undaunted until the task is done I swat on and on until not one live housefly remains in any window of the my house. By the grace of God, after what seemed like hours I defeat that pesky disease carrying foe. I am the victor! Thank God and Amen..... Now I need to find out how they got in. 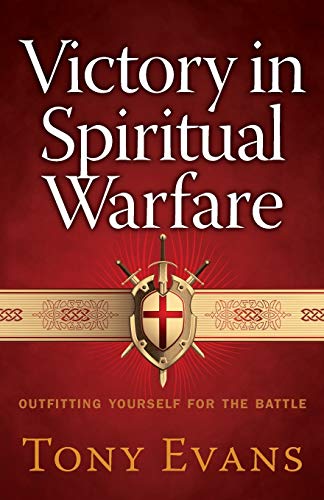 Victory in Spiritual Warfare: Outfitting Yourself for the Battle
Buy Now

This housefly invasion is symbolic of the attack of the enemy . An attack will appear seemingly out of nowhere. It will focus and bombard an area of your life when you are least expecting it. It will try and infiltrate other areas of your life if you don't do something about it.

Face it, when the battle begins, you have to get in the fight . If you don't the enemy will enlarge itself against you. Don't delay your victory by taking precious time to wonder how or why you are being attacked. You can focus on that after you have won.

After I cleaned up the battlefield in my kitchen , I searched the area to find out how they got in. I found that my window screens were not tight enough. There was a tiny gap between the windows and the screens. Just wide enough for the invasion. Flies, like evil forces, don't need lot of room to bring trouble to your life. The smallest opening can be big enough to let in hugh difficulties.

Part of my remedy was to seal off the windows until new screens could be installed. Part of the remedy to the attack of evil forces is to recognize that through trust in God we can be sealed away from the fullness of evil. We have to remember who God is and what He promises to those who put their trust in Him.

No victory comes without a decision . I had to decide to dig in and fight for the peace of my home. When being attacked mentally, emotionally,spiritually or physically, you must decide - fight or faint. Christians have been given powerful weapons which guarantee personal victory. But, if we don't use them then we resign ourselves to defeat.

The battle against evil has already been won . All we need do is to tap into the winning side and become winners by default. You cannot lose if you hold the line. I stood and swatted fly after fly, fully confident that if I didn't quit I would soon gain the victory. This is the confidence that we must have in Jesus; if we stand on His Word no matter what comes, we will experience our victory, just as He has promised.

Spiritual Warfare: How to Stand Firm in the Faith
Buy Now