Jules Verne: Paris In the 20th Century; A Lost Novel

Nighttime Paris from the Eiffel Tower

Back to the Future

This is speculative fiction from Jules Verne (1828 - 1905), is not as popularly read as Five Weeks in a Balloon, The Time Machine, or 20,000 Leagues Under the Sea. In fact, it was not published until 1994. However, it is grand in its predictions and off the timeline of real occurrences by mere years.

Author Verne set Paris and his forecast of its future in 1960, an early year of the US and Soviet Space Programs during the Cold War. For additional period information, one can view the films The Right Stuff and K-19.

For another criticism of capitalistic society, see the work of Franz Kafka in The Metamorphosis. 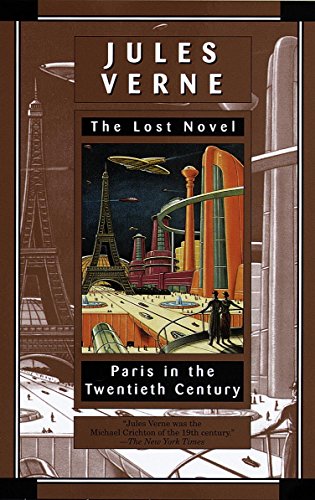 One of the most memorable events of 1960 was the US Presidential election that places America's first Catholic present in office: John Fitzgerald Kennedy. With the event the US Space Program blossomed out into the universe with the President's challenge to reach our moon by the end of the 1960s.

In France, President Charle de Gaulle was on early duty, serving from 1959 - 1969 with the French Fifth Republic (constitution of October 1958), which was a revitalization movement to bring renewal to Paris and all France after WWII. The President wished to be independent from larger national powers and to develop French nuclear weapons during the Cold War. President de Gaulle called for Europe to lead the destiny of world ahead of the USSR, and USA.

Sci-Fi Films and Speculation Written in 1960

Paris au XXesiècle is Paris in the Twentieth Centuryin English and is speculative or futurist writing done 100 years into the future of Jules Verne's current day. Another sci-fi author, Sir Arthur C. Clarke. made similar types of long-range forecasts, although he was shouted down - specifically about satellite transmissions for telecommunications, which came to fruition in his lifetime.

Verne seems to proclaim a warning, as did Franz Kakfa in The Metamorphosis, to the western world about the evils inherent in rabid industrialization and its impact on life, especially the burying of literature and the classics under the importance of business, advanced technologies, and money. Verne also forecasts many of the advances that he imagined, accurately.

Jules Verne wrote about expanding geometric architecture beyond the cubic and rectangular box covered with architectural gingerbread and topped with golden angels and gray gargoyles. He predicted something less baroquely ornate, taller, and sleeker.

He predicted for the Lovre an addition of its 1989 glass-and-steel pyramid structure, actually built in the 20th Century about 120 years later. He predicted the construction details of the Eiffel Tower, erected 24 years after his forecast of 1863. He also forecasted skyscrapers for business and his prediction came to pass many fold.

The protagonist of Verne's futurist novel is a 16-year-old lad, Michel, who has graduated school with a certificate in - of all the wasteful things - humanities: literature and classics. His extended family treats him as an outcast ne'er do well, because only technical writing is the genre respected in 20th Century Paris. He is seen as a bottom feeding sponge in society.

Michel has written a volume of poetry, but cannot sell it, becoming desitute in a mechanical society. With his last coins, he purchases a small bunch of violets for his sweetheart and when he appears at her door, finds that she and her father have been evicted. Papa had been a professor of rhetoric, no longer needed by Paris, terminated from the university with the other men of arts and letters.

Badly shaken and starving to death, Michel wanders in circles around Paris, looking at the electical wonders in a surreal haze of mind. These scenes may have been influenced by Verne's study of Edgar Allen Poe and are reminiscent of scenes in The Masque of the Red Death.

The final scenes evoke more impact upon readers than do this translation by Howard, who comibines sentences and paragraphs into a smoother and blander story. If you can read the story in French or find another translation, you may feel the pain of the starving, dying artist in the snow - and of no use to this mechanized society - more fully.