In the book Junk by Melvin Burgess, first published in 1996, the story is setting in the early 1980`s. He describes first the circumstances in a suburb surrounding for children in their teenager years and different reasons for their running away from home. So we hear Tar`s reasons were to see in his face: "Tar had a reason, plenty of reasons. The latest were painted on his face, too. His upper lip swelled over his teeth like a fat plum. His left eye was black, blue, yellow and red."(Burgess, 1996, p.2 )
Tar´s parents are alcoholics, the mother using her son for coping with household duties and the father using him as scapegoat with beating him up.

Gemma´s parents have a ambiguous relation to her daughter, high expectations about her education and behaviour, but not a little confidence in her doings. They rule over Gemma like over a little girl and show no understanding for Gemma´s growing self-responsibility and her wishs to decide herself about personal things. Their harsh behaviour against Gemma let escalate the situation: "All you have to do is show us you can follow a few simple rules and we can resume a proper family life. You can get a new job and stay out at weekends again. We just need to see some responsibility. That´s all we ask.` My parents needed to be taught a lesson." ( Burgess, 1996, p.15 ) 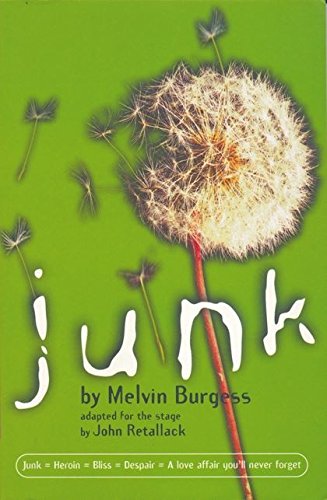 The story about drug abuse

In these surroundings exist a very stern sense of gender roles and expectations for childrens or adolescents behaviour. The parents in both families think not about their own behaviour, they are really convinced that they are right to bring their children with stopping at nothing in the "right" way. Children`s worlds in this society are strict given through parents expectations, adults make the rules and their children have to be obedient. Running away from home the children create a new life sense for themselfves, but the new world has other dangers as parental conflicts and restrictions.

Tar and Gemma enjoy their freedom as squatters. Their new friends are older and help them through the first time of living without parents. Living with anarchists is like a big adventure for the kids. But other teenager friends give them a home and taught Tar and Gemma the begin of drug abuse. The following crimes like child prostitution and dealing with drugs were creating dangers for the adolescents lifes.

Gemma says: " The thing is, I know my limits. I´m sensible about it. Lily says I do everything sensibly even when I go over the top. Too right. I take care of myself. I eat well. Always make the punters use a condom. I don´t work on the streets; I do it through the massage parlour. I don´t share needles, except with Tar. I´m not a junkie. I can stop it whenever I want. I do sometimes, for a week or so, just to show myself I´m still on top. I don´t have aids." ( Burgess, 1996, p.193 )

In this low status as illegal citizens because of their age they need to hide for police and can not seek help without being sendet home to their parents. The children experience social exclusion and the need for doing crimes to survive and get drugs for their addiction. Gemmas view shows her misunderstanding for the own situation, her more and more lower selfesteem and selfworth. Her world is unnoticed changed in criminal ways, the first fun about breaking rules and enjoy freedom is in the last consequence a new and dangerous restriction, for her social life, her health, her education, her future and her child.

All persons in the story tell as narrator a part of the story from their own perspective, this stylistic tool gives the reader views about different personal meanings and thoughts and also the opportunity for an own individual critical point of view. Burgess has create without moralising a realistic picture about teenager in the drug scene in contemporary societies. His writing for teenager shows the children different opportunities for life, their own power to decide for chances and for finding their place in society. His argument for honest writing about adolescents existing social problems is good:


"The final lesson of Junk was this: that we massively underestimate our young people......But if we take the trouble to speak directly to them on their terms of reference instead of ours, they stop waddling clumsily and become intellectually easy and graceful, just like they´re supposed to be....It´s a question of trust, and of making books interesting-surprise,surprise !" ( Burgess, 2009, p.318 )