L'Etrange défaite: Still a Book To Read to Understand France in 1940

The defeat of France in 1940 inspired much self-critique by the French, seeking to find the reasons behind this catastrophic disaster. Degeneration, lack of tanks and aircraft, a divine punishment, many of them have been debunked over time or come to be viewed as at least quaint or themselves suspect political theories - for certainly there were enough mobilized by the post-armistice French government of Vichy, eager to inculpate its predecessors. Thus the show trials of Riom are viewed as exactly that, and much of the hasty responses afterwards as panicked responses to the catastrophe. And yet one book does continue to be very well known indeed and often quoted, cited, and held up as a pertinent and cogent understanding of the Battle of France: Etrange défaite, written by the French medieval historian and soldier Marc Bloch.

Marc Bloch served in the French army in its logistics branch in the Second World War, as a captain in charge of fuel supplies for the army. The opening section of his book recounts his service during the war, where he went through a variety of roles before entering into this one, and did his service in the French army in the Belgian campaign. Withdrawing with the French army during the retreat to Dunkirk he ultimately was evacuated to England, then returned to France in the attempt to reconstitute French forces: unfortunately for the French this did not succeed, but Bloch managed to escape German imprisonment, and wrote Etrange defaite during the period immediately following this event, very quickly and in haste.

This might account for the reason for why the book is, in my opinion, difficult to read and rather murky at times. But regardless of how individual sentences might be so problematic to read, the general thrust of the argumentation is clear: the French high command bears great responsibility for the defeat, with a homogeneous officer corps produced by the Ecole de guerre, one which was excessively rigid and sclerotic, dominated by age rather than vitality and energy.

Furthermore Bloch links this to broader social factors at play in French society, one which was increasingly out of touch with truth and reality, divided against itself. Newspapers with their siren song discouraged real thought and analysis, and the French cared little for information, with even education simply being the rote cramming of material to pass exams. The unions and working class organizations which should have been the standard-bearers of anti-fascism had, for reasons of pacifism, cowardice, or their own self-interest, failed to look upon the national needs and instead to their own concerns, such as the 40 hour work week. The French high bourgeoisie was so obsessed with its own position that it was entirely willing to contemplate a defeat of the Republic and of France if it meant the crushing of the reforms brought about by the Popular Front in 1936. The French entered into a war without a mindset of the appropriate sacrifices that they would have to make and the appropriate struggle which they would have to bear, and the result was the dismal one of 1940.

The surprising thing about L'Etrange defaite is how much of it remains accurate and continues to define our understanding of French society and the French military of the epoch. As mentioned, many of the hasty reactions to the defeat have been roundly rejected by modern scholarship, and yet Bloch's work is essentially the modern orthodoxy - with occasional changes, such as a relative de-emphasis on Communist sabotage or work problems, and a reduced claim of French equipment deficiencies.

Is everything which was spoken by Marc Bloch correct? No, he was a man of his times who lived in the event itself, without the ability to be able to take advantage of hindsight. He saw a fragmented and partial picture of the French nation and the French military - in particular, one might note that his service in the army, working in the rear echelon services, was almost inevitably one where he saw the worst picture of the French military - and the best one of the German forces, as German elite units overran his positions and advanced ruthlessly to the sea. Later studies have shown that in many ways the French defeat was hardly a foregone conclusion, and that even small changes might have resulted in a very different campaign indeed, and with that, Bloch's book would appear absurd in retrospect.

To discuss Bloch's book as a man and story, Bloch clearly comes of as a deep individual, an honorable and moral man, intelligent and clear-seeing, and highly fed up with the French military system. If one is reading the book to see a picture of the 1940 campaign from the ground, one would be disappointed, as he himself is in the rear echelons, but it does make a useful war memoir in of itself.

It is also an irony of the book itself, in that the author Marc Bloch went to his death with the words "Vive la France!" upon his lips. Was Bloch an exception, a singular candle of courage and resilience among a nation which had lost the ability to think critically and which was unwilling to make the sacrifices needed to win? I think that conversely, Bloch overestimated the problems and the weaknesses of France, because the German victory appeared so stunning and magnificent - when, as noted, we know today that with only relatively small changes the German victory could have been aborted in 1940. There were real weaknesses and real problems present in the French army and French nation as a whole in 1940, but they appeared more serious than they might have been otherwise due to a confluence of fate.

But despite this, it is impressive just how much of Bloch's vision and analysis remains cogent today: Reading through his work, with the critique of the weaknesses of the French army - insufficient flexibility, bureaucracy, slowness, incapacity to adapt to updated technology, poor communication, organization difficulties, and too great of a gap between the officers and the men they commanded, and lack of the most modern equipment (although here, one can see that even as Bloch was writing his book, this view was beginning to change to enter into correspondence with the modern perspective: that the French army was, although with some critical failings, generally decently equipped and certainly not the infamous depiction of riflemen going up against German tanks, as Bloch makes note that he was being informed that the weaknesses in such regards were not as great as he feared), one gets the impression that one reads a document written just yesterday. Some aspects may fiddle around the edges, such as debates over the utility of the Maginot line, or the aforementioned equipment issue, but overall much of Bloch's writing seems to have perhaps been the structure which has formed the framework for our perspective upon the Battle of France.

Etrange Defaite is an incredibly difficult book to read. I do not consider myself bilingual in French, but I do consider myself fluent with written texts. Thus I can speak, I believe with authority and validity, in saying that it is a struggle and a pain to get through a quickly written text, with a strange writing style on the behalf of the author, filled with contortions, extremely lengthy sentences, disjointed writing, references to various events without explanation behind them, and as an after-action report which seeks to both look at what was good and what was bad and can hence lose the easy clarity of a polemic. And yet it continues to be an important book to gaze into a primary source writing about the French defeat and its reasons, and a still highly valuable and useful secondary source for a view from above of the disaster. There are few books which manage to, 80 years after their writing, do both. But perhaps with a book which is written in such a difficult style, it would be better to have the English translation too: let a more experienced translator attempt to discern what Bloch had been trying to say instead of stumbling through his own legions of difficult sentences and obscure references. 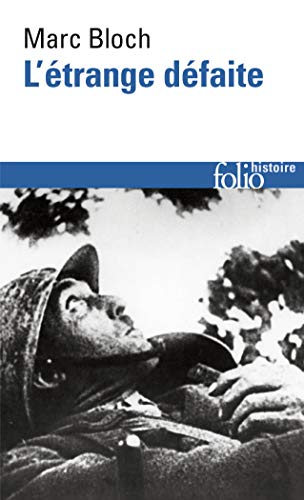