Le chemin moins fréquenté, translated by Laurence Minard from The Road Less Traveled, written by Scott Peck, is not exactly a psychological book. More precisely, it is a mix of psychology, spiritualism, and self-help, written by a psychologist. Certainly, it treats upon psychological matters, and the three subjects are ones which are deeply interrelated - after all, do not we need to have an understanding of our own spirituality and of our own outlook on the world, of the deeper elements of life, if we are to attempt to also understand our self and our psyche? It is a dangerous thing to attempt to divide apart these critical concepts of life instead of meeting them in a holistic manner, but one which at first strikes the reader with a sense of confusion, to see a book which he assumed as "merely" a psychological book to instead be devoted to a much wider range of thoughts and principles than which he first thought.

It may be a tome which at first does not seem to reflect this: the initial opening of the book, in its chapters devoted to the introduction (discussing at length the need for a discipline and control of the self, as well as our own mental preconceptions which order our universe and which we must modify and discard over time), and even the part about love (of which he has a much more expansive definition than otherwise, and which relates not only to love between two individuals in what can closest relate to the Western ideal of romantic love, although he discusses the dubious nature of the concept of romantic love itself, but also about family, children, and relationships in general), are ones which read as less ambitious - fascinating, and perhaps even the ones which I liked the most, or found the most useful to myself, as one can use them to help apply the principles therein outlined, as I discuss later - than the chapters which parade themselves later, devoted to religion and spiritual evolution in relationship to psychology, and the idea of grace, the miracle of the human condition, and spirituality - reflecting a much more religious bent, one which the author himself notes is often much removed from the realm of his other psychologists.

For me, who is interested in a better understanding of the people in the fields of, be it politics, or history, or science, if not always so much their subject matter itself, the book is fascinating for this aspect alone: to look into the way that psychologists understand and treat subjects which stand on the periphery of their profession, such as spiritualism and religion. The popular stereotype of the psychologist I feel, is one who is intensely clinical, deeply embedded in a sort of acceptance and material understanding of the universe - even if he may, it is to be admitted, be one who pursues dreams, which places himself into the odd mixture of being a figure highly devoted to science, while at the same time he is capable of being accused of pseudoscience and not being sufficiently scientific himself. Peck I believe, represents a fascinating division between psychologists which surely must exist and be important to this day, between this materialist side, and his own views, which hinge much more upon spirituality, religion, and their interface with the human condition. Perhaps my favorite case which he had presented was that of a patient named Théophile, who, after his tragic first love, the loss of his childhood friend, and a life where he faced contempt, humiliation, and the imposition from others of a life without joy, energy, pleasure, he found a deep rooted love of god which he had hidden from himself, which was stowed away beneath the clutter. I am not a religious person personally, although perhaps in examining me, Peck would come up with is own analyses and opinions of my own system of beliefs, but this way in which it was admitted and realized by Peck that for some, this relationship to spirituality presented the ultimate hope and severed loss, the hidden desire of Théophile, one which he ultimately found and pursued, was something which to me was deeply moving and comforting. It is also a relationship to one of the fundamental beliefs of the author and I presume the psychological field as a whole: the inherent importance of the individual, their uniqueness, and the value and attention that should be placed on understanding their particular positionality and thoughts. It may seem to be something which is simple, but it is a dramatic difference for those who are used to thinking in terms of institutions, general socio-economic factors, and the broad sweeps of society, to instead focus on the way that the individual relates in their own particular and peculiar way to these elements of the human experience, be it religion, childhood, their fears, their sexuality, or any infinite number of other broad general categories that for each of them mean something very different indeed.

Certainly, the book can turn at times to things which should be obvious - like the idea that instead of simply proceeding first with the pleasures of life, followed by its drudgery, we should instead confront first our problems before that which is less interesting. The author's allusion of this to choosing to eat the cake first, followed by the icing, instead of contenting ourselves merely with what is the sweetest followed by what is less desirable, is a simplistic one - perhaps one not aided as well by my own disinterest in the icing, which I find to be sickly sweet and much less satisfying than the cake itself, although perhaps this is only applicable to the American industrial cakes with their fake and horrifying coating of sugar frosting upon themselves, while at least for the interior, something more real and less artificial can still manage to do its best to persevere despite the best efforts of industrial cuisine. But common sense is after all, not so common.

Of more interest to me is the discussion, admittedly rather brief, which it goes into concerning passive-dependent characters, those who are driven above all else to seek the love and affection of other people, in an unequal and unbalanced exchange - fundamentally their life is more driven by what they can get from others, than what they can themselves. In a lesser degree, this is something which is reflected with myself. I have thought about this before, but to see it written as a carefully categorized and formalized text, is something which helps to organize my thoughts on the matter.

Of course any book written by a psychologist can easily turn into simply the praises of the discipline, about its ability to change around and to transform the human outlook, to deal with problems and woes. This is natural after all, since if psychologists couldn't do this, then what would be the point of their existence? To some extent one can see this in the book, since Peck as a rule, succeeds in discovering whatever it is that ails his patients, curing them. Most often this is discovered in a singular moment, in conversation with his patients, when he realizes whatever the key problem is that forms the chink in their armor, from which point he can proceed to heal them. For me, not being a psychologist, I don't know if this is an accurate reflection of the field, but it seems suspiciously easy, almost like playing into a stereotype of how they work, to present to the general public a sanitized and easy version of their labors. But as a whole I think that the volume does an adequate job of managing to present a broadly balanced view of the profession and its strengths and limitations, instead of being one which simply extols the virtues of the metier.

It seems that the author has a tendency to play with some of his terminology in a way which I consider rather fast and loose, such as applying almost any system of outlooks to be a religion: true, we all have our own ways of looking at the universe, and we should be aware of them and not simply assume that because we go to the church or not, that in essence our relationship to spirituality and our perception of the world stops there, but to do so to such a extent undermines our capacity to be able to effectively analyze and understand what religion is: not everything is a religion after all, and we must make the division marker clear between a belief system, a system of morals and philosophy and outlook, and religion clear - although the effects may be the same, the two very much are not.

For some people I am sure, this book is one which, if not one which will change their life, will nevertheless be able to introduce a new understanding of the world, human development, themselves, and how to live their life. For me, many of the topics are ones which are removed from my direct life, or which I, even if I don't formally categorize and understand them, I still try to practice. Nevertheless it is a book which in its elegance, readability, comprehensibility, and breadth, provides for a path towards self-betterment and self-comprehension which is not to be underestimated, but rather embraced and used to nourish our thoughts and lives. It is not a coincidence that the author chose to entitle the work with the word road, then translated into French with the word route: it lays out a road towards self-improvement and self-worth, one which is hard to travel upon, which takes effort, energy, courage, and determination, but which we must fundamentally all set our feet to march upon if we are to find ourselves and find meaning in life. 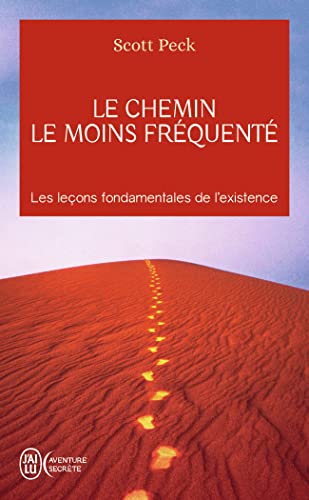