Lessons of World Destruction from Atlantis

Everyone has Heard of Atlantis

Everyone has heard some version of the story of Atlantis. According to legend this was a highly advanced place. The story suggests that in Earth's ancient past a civilization of people existed who were highly advanced, possibly even more so than we are today. They had technology that would rival anything in modern times. These people were not primitive, they were philosophical, sophisticated, and educated.

The story goes that an ancient advanced culture reached a point of superior technology and sophisticated culture, then suddenly the society and the land they occupied was gone. In an instant this highly advanced civilization was gone from the face of the Earth. There was a monumental catastrophe the likes of which Earth has not experienced for many thousands of years, and there was nothing anyone could do about it.

Earth has been around for a very long time, billions of years in fact. Believing we have the entire and complete history of this planet recorded and understood cannot be valid. It is impossible to know everything. There is evidence supporting this idea that cannot be easily dismissed. We likely do not have an accurate or complete history of our planet, and there is a very important lesson to be learned from the legend of Atlantis.

Edgar Cayce's Atlantis and Lemuria: The Lost Civilizations in the Light of Modern Discoveries
Buy Now

Every Ancient Culture Records a Flood

In the Bible, in Jeremiah chapter four, God shows Jeremiah a vision. That vision is depicting the world being a very good place, hospitable to life, and very beautiful. Then something terrible happens causing Earth to become a horrible lifeless place. This is something that happens time and time again on this planet, an extinction event. The story in Jeremiah is suggesting Earth goes through cycles of destruction and renewal.

We also have the story of Noah and the Great Flood of the Bible, but the story seems to come from a time much older than the Bible. Every ancient culture reports a giant flood that happened all over the world as described in the story of Noah.

Science argues that this type of flood could not happen and maintains that at no time did water ever cover the peak of every mountain on Earth.

However, if everything you knew to exist was laid to ruin, from your perspective it would be the entire world. If there were something large enough, it could effect all inhabitants of the entire planet. If the polar ice caps were to melt completely we would not see water cover every mountain top, but we would say that the entire planet had been destroyed. Natural disasters are often described in terms that are exaggerated and overblown. Much is the same as in the time of Noah. Stories of a deluge effecting the whole planet are recorded by all ancient people. Something must have happened, otherwise all these people from all over the world would not have written that it did.

Plato in Less than 3 Minutes 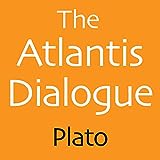 In Just One Day and Night

Plato wrote a very good story about Atlantis. He said it was destroyed in just one day and one night.

Some people believe Atlantis was a highly technologically advanced society that existed worldwide before the time of Noah and the Great Flood. It would be as if what we call Earth, they called Atlantis.

Most commonly Atlantis is believed to have been an island in the middle of the Atlantic Ocean. If there was a huge island, a gigantic land mass, that collapsed into the bottom of the ocean in one day, the waves would have been tremendous.

This is actually possible. If there were a tremendous shift in the tectonic plates of Earth, it is feasible that a giant land mass could actually disappear in just one day and one night exactly as Plato wrote.

Polar Shift theory suggest that the crust of our planet could somehow slip all at once and move into another position. If something like this were to actually happen, there would be stories coming from history that would last for thousands of years.

Maybe these stories would last all the way until the next world decimation happened. Civilizations existing after recovery from these events might dismiss these stories. They may not pay any attention to the lessons being provided for the Human race. If we pay no attention to the stories of Atlantis, we might very well be missing something extremely important. We should take this a bit more seriously and at least consider it as a possibility.

On the floor of the world's oceans, in places where water has been for at least ten thousand years, are ruins of what seem to be man made objects. There are remains of ancient temples, huge layouts of roads, and perfectly square stones. It cannot be that these are naturally formed objects. These things did not drift into place somehow or fall off a ship. The things under the ocean could have only been made and placed in their locations during a time when water was not present in the area. It appears to be clear evidence of an ancient time before recorded history.

From this research, it appears sea levels rose hundreds of feet in a very short period of time. This would send water inland many miles. As we have many large cities today on coastlines, if water surged in and sea levels suddenly rose, our cities too would be on the floor of the ocean.

All around the world huge structures and layouts that simply defy any idea of natural formation have been discovered off coastlines where water has been for many thousands of years. Just like today, there were cities on coastlines around the world and when the water came up the cities were destroyed. To those people it truly would have been the end of the world.

These things should not be where they are. It all points to a time about 10,000 to 13,000 years ago when there were not supposed to be people capable of building anything like what has been found, but it is there. The only possible conclusion is to consider that we may not have all the answers just yet. There may be more to the story of Earth than what we are aware of.

Fingerprints of the Gods
Buy Now

Things are not Where They Should Be

Things have been discovered very high in mountain ranges all over the world that should only be found in water. There are fossils of creatures that only live in water being discovered on mountain tops. Sea shells have been found in impossible locations high up in mountain ranges. At some point, water must have been there. These findings cannot be explained using our current understanding of things

Mammoths and other animals have been found in what seem to be mass graves, sometimes with undigested food remaining in their stomachs. The way they are found looks to be the result of massive amounts of water rushing in and consuming them. What is being discovered seems to only be explainable if we begin to question long held beliefs about the history of the world. It is possible to consider the idea of an ancient lost civilization.

Disaster can Take Many Forms

We know of many things that could cause mass extinction to occur. There are those who speak of electromagnetic events that could land us back in the Stone Age. Nuclear bombs could end the planet as we know it, and maybe all life as well. The Sun could release a mighty flare causing destruction beyond our wildest imaginations. We could have a giant meteor slam into Earth as is commonly believed to be the reason the dinosaurs died off. The climate could change leaving our planet a wasteland, not suitable for Human habitation. Huge earthquakes and volcanoes could change the layout of the entire Earth into an absolutely desperate situation. There are numerous events that we absolutely know are possible. We know that these type of events have happened on Earth, and we know they will happen again.

The lesson coming from stories like Atlantis is that one day Earth will change. We have been living in a very peaceful time on our planet, but the day is coming when this will no longer be. Something will eventually happen. It could happen gradually over a long period of time, or in an instant without warning. We have no way of knowing exactly when or how worldwide disaster will happen, but we do know with absolute certainty that the day will come.

In thousands of years people may find it implausible and unthinkable to consider that we today ever existed. There may be no record of us at all, but we know we are here. If they do, in thousands of years, after some worldwide disaster occurs, have records of us, what will they think of us? What will they say about us? If no records remain, might we too be erased from history just as those who inhabited Atlantis have been erased? This is a sobering thought worth considering.

Here we are, a highly advanced civilization with technology that is amazing. We are at the very pinnacle of civilization. We are highly evolved beyond what is considered to have ever existed on this planet. We are exactly the same today as was written about Atlantis just before disaster ended their world. In an instant, even in the blink of an eye, our entire civilization and way of life can come to an abrupt halt. There is a valuable lesson for Humanity in the story of Atlantis. This is why the story and those like it will endure for many years to come. It is not the detains, but the lesson, the moral, that is important, and it is important.