We’re going to stop here and ‘splain that the Avengers exist in a different fictional universe than do Superman, Batman, Wonder Woman — because they are owned by a different publishing company, and just because they are all comicbook superheroes doesn’t make them all live in the same plain of existence — which is why these three characters didn’t wind up in Avengers: Endgame.

Not all heroes are "super"

Back to what we were talking about.

"Just when you thought every good sci-fi story has already been written, Ramon Gil proves that wrong with his amazing series 'Scifies'!"

The Heroes have it

So, comicbooks. Would it surprise you to learn that there are probably as many (if not more) comicbook titles published annually that were by non-mainstream comicbook companies? In addition to Marvel and DC (arguably the two longest running and most well-known companies) there are Image, Dark Horse, Valiant, IDW, Archie, and others. Still, there is a veritable host of even smaller comicbook publishers some publish only a small handful of titles and operate out of someone’s house. These are what we call the Independent market.

A bit of background

One of these Indie publishers that has not only garnered our attention, but (we feel) is making serious inroads into the field of illustrated speculative fiction is Ramon Gil. We’ve known Ramon for a bit, and wrote about him here, but we have enjoyed his work so much (and recently acquired a pile of books he’s authored), that we just felt that we needed to talk him up more because we are so totally blown away by the quality of work that we’ve seen from him over the past few years. 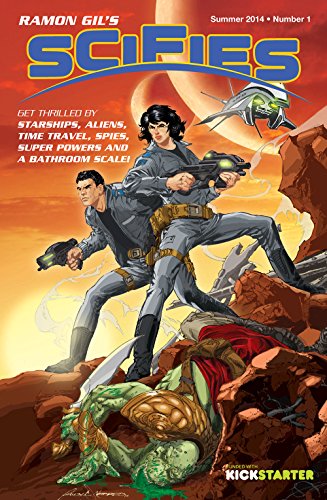 Ramon Gil's Scifies #1
1 cup Science Fiction,1 cup espionage, half cup of superheroes, and a dash of romance. Top with a generous heaping of snappy banter! Scifes is a comic book anthology of intelligent and humorous science fiction tales.
Buy Now

The Men From DARPA

First up is his series The Men From DARPA (DARPA is a real governmental agency whose full name is Defense Advanced Research Projects Agency that is responsible for the development of emerging technologies for use by the military). The book is ostensibly about a quartet of awkward, bookish, nerdy, geeky scientists who work for DARPA but while they are truly brilliant in the lab, they prove to be utterly inept in the field of espionage. (Think SHIELD meets The Big Bang Theory, so yeah, it is mostly played for laughs.) We first meet these guys in issue #1 when one of them, Ward, brings a beautiful woman, Rosa, around that he introduces as his girlfriend. Naturally none of the others believe him at first, and as it turns out, they are right. She is a spy who is out to steal one of their Top-Secret projects.

The Men From DARPA #1

Once that is all straightened out they are reassigned to head up a Special Ops office, which brings us to the second issue where they are tasked with locating a missing colleague who has been working on a project that could possibly hold the key to limitless power. Before they set out on this new assignment, the NSA assigns a Secret Service agent to accompany them. Unlike the scientists, Agent Rubens is something of a by-the-book straight arrow; as an aside, Agent Rubens father worked on President Kennedy’s detail — which may sound like an incidental detail, but more on that later.

The Men from DARPA #2

A twisting of time

This story is something of a hopscotch, treasure hunt as the scientists track down a handful of clues that lead from one location to another until the ultimately find their friend. Issue three gets a tad more science-fictiony as the boys follow Agent Rubens back in time to Dallas in November of 1963 as Rubens attempts to stop the assassination of President Kennedy. Now, we don’t want to give anything away about this tale, but man, does it pull a very cool ending out of nowhere even though all the clues are paraded out there right in the open.

The Men from DARPA #3

At the end of the day the series is not only inventive and entertaining, but a darn fine read, combining enough sparkling dialogue with real-life events and organizations, and well-written stories, not to mention heaping helpings of science trivia, Star Trek and other pop culture references. We especially enjoyed The Dallas Turning Point for all of the Kennedy conspiracy references and of course the twisted timeline of it all.

The Hard Code, a futuristic series that takes place in the year 2268. Androids are now part of everyday society and supposedly every bit as “equal” citizens, as are flesh-and-blood humans, only perhaps not so much. The story follows a pair of NYPD detectives and casual lovers Garcia and Drake, who is an “artificial person.” The pair discover that androids are losing the “hard code” that has kept them subservient for a hundred years (think of the Hard Code as Asimov’s Three Laws of Robotics). Tensions begin to rise as increased incidents of android disobedience begin to multiply at an ever-increasing rate. As people’s bigotry and fears increase, the world government contemplates rounding up all androids and placing them into internment camps (for their own protection).

Come for the art, stay for the story

With the aid of Allegra, a mysterious woman from Drake’s past, the two detectives must uncover the mystery behind the disappearing codes before full-scale war breaks out between man and machine. Not one to shy away from controversial or topical subjects, Ramon has the comic explore issues of race relations, slavery, and even sexual relationships. Once again Ramon’s writing and dialogue carry the day as the story plays out over the art of the renown Trevor Von Eeden. Both issues have unrelated short back-up stories.

Sci Fi through the ages

The third comicbook series that we’re going to look at to day is Senturies, which tells the story of Alex Ozuka, a test pilot who discovers a secret about her father, whom she thought was long-dead. As it turns out, he just may be alive — and not only that, but a part of a secret team called The Sentries that guards Earth from alien attack. This particular tale skips back and forth through time (a recurrent theme with Ramon) as we see how this clandestine team seeks to protect the blue-green orb of our birth.

Unlike his other series, this one carries a tinge of manga-style to the art, giving it a different flavor from the The Men from DARPA (which has a bit of a cartoony style), or The Hard Code which carries a more serious sci-fi look to it. Still, each of the three series successfully carries off its individual storyline making them different from one another and yet all highly readable.

A book well worth reading

Finally, we come to a very unique 32-page pamphlet, which is Ramon’s Comic Book Career Manual. Here Ramon presents readers with a short, and concise guide on how to launch (or sustain) a career in comics. The very engaging and well-written book covers everything from networking to self-publishing to marketing and should serve as a must-have for any novice creator, artists, writers, and well, anyone in between.

“Dude, I'm writing he Avengers and I still haven't quit my day job.”

Great advice from someone who knows

Ramon pulls from his very extensive work from numerous Indie publishers (including his own company) which has appeared in Dynamite, SPP, Vortex, Bleeding Cool, The Nerdist, Indie Comics Magazine and many more. He covers topics from getting a job (no, not just a comicbook job, but one to pay the bills while you are working freelance assignment), the “Why” you want to do this (if it is to make oodles of money, you might want to re-evaluate you motives), to networking, to working on anthologies (yeah, you have a great idea, but you have to get known before people are going to be willing to shell out money for just your work), Crowd-funding (Kickstarter, IndyGoGo), marketing, and just about anything else you can think of if you want to become a part of this very cool industry.

As to why he wrote a 32-page pamphlet instead of a 320-page book? Ramon admits that he has a short attention span , and simply assumes that others do as well (this writer has dozens of books on how to work, and create in this field, and — were he to be honest — still has more than he cares to admit sitting unread on a shelf somewhere, making this little gem, something he actually refers to quite often.

Come to the Con!

Once again, we want to say that Ramon is an amazing talent, and we could all become better at this gig if we were more like him. If you want to know more about Ramon, and are close to New York City, you’ll want to stop in to check him out at The Fashion Institute of Technology’s Diversity Comic Con on Friday, October 25, 2019, from 10 a.m. – 6 p.m.