Lincoln and the Economics of the American Dream: The Materialist Gaze

A fascinating thing about reading historical works which themselves are written in the past is that their depiction of history is inherently shaped by the era in which they were written. Albert Schweitzer pointed out in his "The Quest of the Historical Jesus" that Jesus was re-imagined and re-formatted every generation in Europe to suit the needs of the present, rebuilt in the image of societies in transition. Lincoln is a figure who in the English speaking world is rivaled only by Jesus himself in the amount written upon him, and thus it is not unsurprising that Lincoln and the Economics of the American Dream is a book which reflects well its times - a materialist, economic, rationalist analysis of the Great Emancipator, one which ties Lincoln's beliefs to material development and economic growth linked to the American dream. The book does a convincing job in arguing the point and makes for a good look at another part of Lincoln's objectives, showing it as a unifying theme throughout the life of Lincoln, but the mark of the era is what makes it into such an interesting look into historiography.

Lincoln and the Economics of the American Dream is divided into two sections, with the first being about Lincoln in his early days, as a Whig, principally a legislator in the frontier state of Illinois. The second is about Lincoln as he became a Republican with the collapse of the Whig party, and then his time in office as president of the United States.

"Adventures in Quest of Advancement", or Chapter 1, is about Lincoln's first political forays, elected as a representative in Illinois and dedicated almost single-mindedly to the issue of government-funded infrastructure improvements.

Chapter 2' But It Is Pretty to See What Money Will Do" is about the struggle over banking, where Lincoln was a defender of the central Bank of the United States and banking in general, against its opponents.

Unfortunately Lincoln's programs did not automatically succeed, as examined in the third chapter, "Herme's Reader", when depression hit Illinois and caused a collapse of Lincoln's transport projects - despite his best attempts to summon up the financial and political will to see them through, which only netted the success of preventing a default on the debt.

This was not poplar, since it required taxes, the subject of Chapter 4, "Egyptian Locust", which Lincoln defended as a necessity despite their opposition.

"Dead Point" as is known Chapter 5, is about Lincoln's efforts to defend and promote local Illinois banks, which were hindered by the ongoing economic depression in the country.

This broadly continues as the subject of chapter 6, as can be inferred by the title "The Log Cabin and the Bank" - is, well, Lincoln and banking, his principal issue in the 1840 presidential election where he led local Whig electioneering in the state.

Switching to Lincoln and agriculture, "Et in Arcadia Ego" - I, Too Have Lived in Arcady" - as is titled chapter 7, is principally about the problem of land and settlement, showing that Lincoln was not a particular partisan of Western settlement, instead preferring intensive eternal development, but moderately so in all respects. He was never a particularly farming-centric man, even if he often used plebeian language.

"On the Road to Paradise", Chapter 8, is about Lincoln in the effort for protectionist policies for the United States in 1842, making many speeches and remembering the subject until his final days.

Failure in his efforts to promote protectionism was not due to lack of intellectual thought and research into the subject, as shown in chapter 9, "Foolscap Halfsheets" which demonstrates the extensive economic underpinnings and application that Lincoln had, the product of a methodical and scientific mind.

Lincoln arrived in Washington around this time as a representative, and while he had to give up the issue of the tariff, as Chapter 10 - "The Beautiful Lonely Science" shows he continued to be very determined on the subject of transportation improvements.

Chapter 11 is the final chapter of the first part of the book, entitled "God's Political Economy" which deals with Lincoln's attitude on expansionism, which he was indifferent to or opposed,and the general Whig failure in the 1848 election, which led to his temporary retirement from politics.

Chapter 12, "The Fruit of Labor", comes to the most familiar of Lincoln themes - slavery. Lincoln was convinced that the central pillar of the United States was that men would have a chance to rise and that men's labor would belong to themselves, and that slavery represented a deadly threat to this, one which would grow unless if checked.

Like with other issues, Lincoln would throw himself single-mindedly into the slavery problem, so that his views on agriculture, tariffs, labor, etc. were not expressed in public during this period, being entirely subsumed by the slavery issue - which is the subject, in chapter 13 which ironically tends to focus on what his views were despite the gag imposed upon him, entitled "In the Shadow of Slavery"

Lincoln as president is the subject of the remaining part of the book, starting with "The Whig in the White House Part 1", as chapter 14, which showed the way in which Lincoln used the relatively limited powers available to him under the classical Whig theory of limited presidential powers to attempt to carry out his program of economic policies, most often done through Congress and under his secondary influence.

Not very imaginatively named, "The Whig in the White House, Part II" which is Chapter 15, is about once more the limitations on his office and how he used and worked around them, and the relationship of Lincoln to labor and his views on it and actions as president.

"The Business of Peacemaking", Chapter 16, shows that Lincoln was convinced that the South had a vested economic interest in rejoining the Union, and he consistently tried to incentive the South to come to the peace table with continued trade and peace proposals of compensated emancipation of Southern slaves - a strategy which failed, and shows once more Lincoln's heavily economic focused mind.

"The Most Difficult Question" is chapter 17, about Lincoln's views on emancipation - showing that his proposals concerning recolonization by freed slaves were a principally political proposition, and Lincoln thought that freed slaves would find their role with equal economic rights to whites in post-slavery America, even if he was more doubtful about political rights. His hope was to reintegrate the South into the Union with the end of slavery bringing prosperity and commercial advancement to the South which would make the American Dream a universal affair across all of the US.

"The Backwoods Jupiter", chapter 18, looks at how Lincoln's economic views affected his military operations, as he emphasized economic factors in war, the destruction of armies rather than the taking of land, and attacking the South where it was weakest - manpower, with the recruiting of black soldiers and attempts to undermine the South's black manpower base, while his egalitarian views led to a rapid rise and turnover of military personnel.

The last chapter, chapter 19, "Watchman, What of the Night", deals with what Lincoln perceived democracy as, some of the sources of his original ideas, and his perception of equality and opportunity as the bedrock of the American political system.

Lincoln as the figure of the Great Emancipator is a man who gives himself easily to sacrosanct status. A holy man, religious, simple, who carried upon his head the years of pain and struggle of the war as his crown of thorns, who died to save us from the sin of slavery. It thus is a strange paradox when "Lincoln and the Economics of the American Dream" transforms this overwhelmingly spiritual depiction into an economic one - although one that in the end suits America well.

Most ideas about Lincoln only have a limited role for him in his pre-presidency days, and these tend to be received in a few snapshots: Lincoln the rail splitter, Lincoln the frontiersman who grew up in a cabin, Lincoln the failed lawyer, and Lincoln in his debates with Douglas. Thus it is refreshing that Boritt's work places much more emphasis upon the pre-presidency days and the general political career of Lincoln - in fact, this dominates, and only a relatively small part of the book in its latter sections is devoted to Lincoln as president, while the majority is about Lincoln in his early days as a humble politician in Illinois. Some of the presidential period could use some fleshing out - the book is eager to proclaim the limited role of Lincoln in power relating to congress and the legislature, but Lincoln is also known for having taken a strong role in direct administration which he used to keep the Union together, regardless of the cost to civil liberties and opposition from various states to his firm policies, and the book does not touch upon this.

While any book about economics risks becoming dull and boring, and this does sometimes plague Lincoln and the Economics of the American Dream, Borrit is a cultured enough man that he is able to forestall this to some extent with his references to poetry, allusions, and quotations from Lincoln or others. It is no page turner, but it is neither terribly dry.

The central thesis of the book - that Lincoln was concerned above all else with economic affairs, and that at the heart of this Lincoln believed in what we would later come to call the American dream, that anyone through hard work could - and should - be able to rise in life, in opportunity and equality, and that this should be supported by the government which would develop the material prosperity of the nation - is one that is cogently well stated and shown. Furthermore the book includes enough context and the actual results of Lincoln's actions and policies that it is more than just a political biography - it serves as a useful window into the circumstances and events of Lincoln's life and the growth of middle 19th century America.

There are I am convinced, as many facets to Lincoln as there are hopes and dreams in our society: every generation Lincoln will be re-imagined - or scorned, as in the present we hound the figures of the past and force them to abide by the full panoply of our manifold expectations of them, and inevitably find them wanting - to form a canvas of our opinions. Boritt's work is one which is excellent and well worth reading, both for showing a facet of Lincoln which few would consider otherwise, and for looking at him over the course of his political life and not merely when he became President, but also for showing a particular mindset, a zeitgeist, of the 1970s when the book was written - of a material focus for Lincoln, of a belief that it was the brave new world of economic development and commerce that deserved the fullest measure of our devotion, and that not only was this necessary and inevitable, but even good and just. As always with a book on a facet of Lincoln, we both understand more about the man and more about ourselves.

4 stars for Lincoln and the Economics of the American Dream 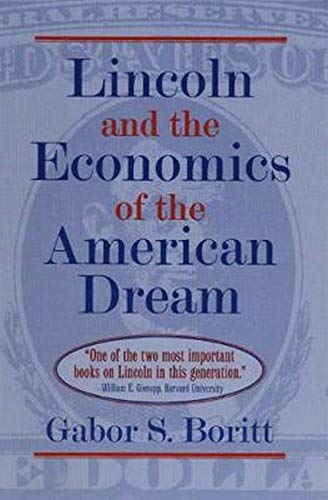 Lincoln and the Economics of the American Dream
Buy Now