Book Review on Claudius the God: And His Wife Messalina (Claudius #2) by Robert Graves

Robert Graves: A Portrait of the Author as a Man

To begin this review I have to say if you have not read I, Claudius, the first installment of this historical pair, go do it. Drop everything and do it right freaking now.

Robert Graves was first and foremost a lover of the written word. He wrote books, poems, and translations. But he was also a scholar and historian. (He also fought in a war. He was quite the man.) His historical studies and translations of ancient Greek helped to inform his writing and allow him to create a fantastic narrative around real events.

All of that is why you should read I, Claudius, which is the first part of this pair discussing the life of one time Citizen and eventual Emperor of Rome. For my personal taste it is better than the historical mangling of some authors who shall remained unnamed but wrote certain popular novels about various Tudor family members. But it has been about 6 years since I read that first installment and will focus the remainder of this review on Claudius the God: And His Wife Messalina.

This book focuses on the life of Tiberius Claudius Caesar Augustus Germanicus, the fourth Emperor of Rome during his reign from 41 AD to 54 AD. Written as though it were his autobiography, the book is a cleverly written novel full of historical goodies that ring true to historical scholarship, while obviously taking some liberties and some assumptions. Telling a single story about ancient history requires picking what some historians think over others. It provides interesting motivations and plausible stories behind some of the facts that we are certain of.

On the whole this book lacks some of the wit and entertainment of the first. Part of that is the fault of history. Claudius himself struggles with the monotony of life as a reluctant Emperor trying to restore Rome to a position ready for a Republic. To add some life in, Graves brings some secondary characters to the forefront, such as the colorful Herod Agrippa. He also taunts us with the sexy details of another character, which, when delivered, is like watching all the juiciest parts of Grey’s Anatomy in the span of ten minutes. He also develops an interesting almost Lockwoodian (of Wuthering Heights) approach to narrating in this sequel as his ego begins to get the best of him.

One of the best aspects is introspective view of a significant figure during the time of the Caesars and the fall of the Republic. Especially his delightfully ironic views on trying to push a Republic on people who didn't really want it with a Senate that couldn't handle it between the madness of and excess of figures such as Caligula and Nero.

I would recommend this book . . . depending. The stronger a lover of history, the stronger the recommendation. It was both interesting and edifying, but the first book remains a better novel.

"Herod himself always insisted that he was congenitally a rogue. To which I would reply, "No, you are a fundamentally virtuous man wearing the mask of roguery." This would make him angry. A month or two before Caligula's death we had a conversation of this sort. At the end of it he said, 'Shall I tell you about yourself?' 'There's no need,' I answered, 'I'm the Official Fool of the Palace.' 'Well,' he said, 'there are fools who pretend to be wise men and wise men who pretend to be fools, but you are the first case I have yet encountered of a fool pretending to be a fool. And one day you'll see, my friend, what sort of a virtuous Jew you are dealing with.'" 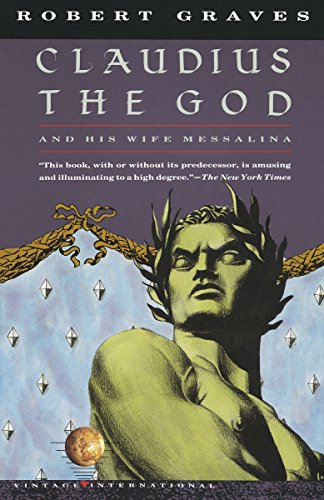 Claudius the God: And His Wife Messalina
Buy Now