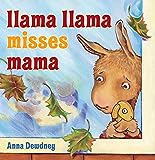 Llama Llama Misses Mama, and tells the story of little Llama's first day of school. Llama Llama is reluctant to leave his mama on the first day of school, and tries bravely at first, but after quavering a bit, begins to cry. The friendly teacher and a group of brand new friends coax Llama into joining the school fun, just in time for little Llama to share his new territory with his Mama.

Like all of the other books in the Llama Llama series, this book isn't short on Llama drama. But as with all good books in the first day of school genre, Llama Llama learns that a day that begins with drama doesn't have to end in trauma. (Sorry folks, just couldn't help myself there.)

If you are a fan of Llama Llama you will find this a satisfying addition to the series. The book addresses a child's first day of school with aplomb, using the familiar and soothing rhyming cadence that will makes this new addition to Dewdney's growing collection of stories another read-over-and-over success. This book is hot off the presses as of March 2009, so while the ink is still drying, it has yet to earn the noteriety of other books like The Kissing Hand, that are classroom staples for preschool and kindergarten teachers who may need to coax a few knee-clutching preschoolers through this important and momentous milestone.

I like the way Dewdney depicts the Momma Llama character. Although she loves her little Llama son, she is not quick to coddle him, even though he seems to throw a raging temper tantrum in each of her stories! Llama learns and overcomes as he does in each of the other stories. It is satisfying to see Llama's teary eyes filled with the excitement of new friends.

Dewdney's self-styled illustrations continue to have a smooth and professional quality that was lacking in Llama Llama Red Pajama, her first book featuring her sweet title character. Cuter than ever, young preschoolers will relate to Llama on his first day of school.

Other Books by Anna Dewdney

Llama Llama Red Pajama. In this premiere book in Dewdney's Llama series, Llama is put to bed by his momma. He waits in bed for her to come sooth him to sleep, but she is interrupted by a phone call. He gets rather upset, but his mama soon responds, though she firmly explains that she cant always come to him right away.

Llama Llama Mad At Mama. In the second book in the series, Llama Llama visits the big box store, Shop-O-Rama, for an afternoon of shopping. Llama Llama dislikes shopping and gets impatient about his promised treat. The result is not only Llama drama, but a raging temper tantrum.

Each of Dewdney's books addresses common situations and milestones that toddlers and younger preschoolers will easily relate to.

More Books About the First Day of School

Animals Should Definitely Not Wear Clothing by Judi Barrett · A Chair for My Mother by Vera B. Williams · Babies by Gyo Fujikawa · Brown Bear Brown Bear What Do You See by Bill Martin and Eric Carle · Charley Harper's ABCs by Charlie Harper · Christmas Cookies: Bite-Size Holiday Lessons · Chrysanthemum by Kevin Henkes · Daughter of a King by Rachel Ann Nunes · Excuse Me! By Lisa Kopelke · Gregory the Terrible Eater by Mitchell Sharmat · Harry and The Terrible Whatzit by Dick Gackenbach · Hilda Must Be Dancing by Karma Wilson · I Need My Monster by Amanda Noll · I'd Choose You by John Trent · Joseph Had a Little Overcoat by Simms Taback · King of Kings by Susan Hill · Ladybug Girl by Jacky Davis and David Soman · Lily's Purple Plastic Purse by Kevin Henkes · Llama Llama Mad at Mama by Anna Dewdney · Llama Llama Misses Mama by Anna Dewdney · Mister Seahorse by Eric Carle · No David! by David Shannon · Olivia by Ian Falconer · Out of the Ocean by Debra Frasier · Snowballs by Lois Ehlert · So Much by Trish Cooke and Helen Oxenbury · Souperchicken by Mary Jane and Herm Auch · The Gingerbread Boy by Paul Galdone · The Grouchy Ladybug by Eric Carle · The King With Six Friends by Jay Williams · The Little Red Hen and the Passover Matzah by Leslie Kimmelman · The Little Red Hen Makes a Pizza by Philemon Sturges · The Littlest Angel by Charles Tazewell · The Patchwork Quilt by Valerie Flournoy · The Red Shoes a Fairy Tale by Gloria Fowler and Sun Young Yoo · The Snowy Day by Ezra Jack Keats · Tikki Tikki Tembo by Arlene Mosel · Too Many Pumpkins by Linda White · Where the Wild Things Are by Maurice Sendak · Yoon and the Christmas Mitten by Helen Recorvits