Manifesto of a Writer and a Critic

I'd like to say a few words on the subject of criticism: literary, film, and pop culture in general. Anyone who has perused my Hubs knows that I have strong opinions, sometimes strongly worded, about a lot of things. When I write a review, whether it's of a movie, a book, a comic, or a TV show, I try to take the time to both analyze it on objective points like plot and character development, but I also express my personal feelings. After all, the ultimate test of the quality of a piece of media is the quality of the experience that one has while consuming (reading, watching, whatever) it.

A lot of people have disagreed with me on certain things. Part of the reason I choose to write this manifesto is because some of those objections have been directed not at the fact that people thought that my opinions were incorrect or groundless, but at the fact that they believed I was unqualified to comment on or criticize something created by someone else, particularly by someone more accomplished than I am. I am addressing that issue, because I think it's important. It's kind of hard for me to justify expressing my opinion here, let alone expecting anyone to respect it, if I don't have a solid foundation for believing that my own opinion is worth expressing, let alone defending.

The fact of the matter is that the Internet has changed the way we view our own culture, and the way that we interact with each other and the world around us and that an awful lot of people have chosen to use this means of communication negatively. A negative opinion or review is a lot more likely to be searched and found online than a positive one. You get a lot more hits if you Google "Justin Beiber sucks" than if you type "Justin Beiber is great." (Well, you probably do. I haven't really tested this, but it would figure. After all, Justin Beiber does suck.) This is unfortunate. Not only does it create a culture of accusation, disgust, and insults tha are often largely unwarranted but it drowns us in so much depressing, negative static that we begin to lose our ability to discriminate between an honestly expressed negative opinion (i.e. "I didn't like that movie. It was terrible, and here's why...") and someone who is simply ranting and raving because they don't like their own life or themselves and therefore can't enjoy anything properly. (I will let you imagine your own example of this. A lot of it seems to consist of teenaged boys who can't describe anything without using the word "gay" every other sentence, but I digress.) The Internet wonks, trolls, haters, and wannabes have slanted the tone of the conversation about pop culture in their favor for years now, and it doesn't appear that this is going to change. Just as the metaphorical "squeaky wheel gets the oil" (I say metaphorical, not proverbial because it's a metaphor not a proverb, but that's just me being a language snob; I make no excuses or apologies), the person with the most time on his hands and the greatest volume of vitriol to spill fills a larger volume of the Internet with nonsense. Sensible people with well-considered, worthwhile opinions don't have the time to post things as often as disgruntled losers. It's a fact of life, although I am obviously oversimplifying the issue for the sake of brevity.

It is often said that everyone has the right to their own opinion. A lot of people I've spoken with have offered a fairly reasonable argument that that's simply not true. Someone who chooses not to inform themselves about an issue on which they express an opinion, particularly someone who is willfully ignorant on a particular subject, may harbor whatever thoughts and ideas they please but it would be hard for them to argue that they have the same right to their opinion as an individual who educates themselves and constructs a philosophical position based on an assessment of the facts. A right to hold an opinion is distinct from the right to express an opinion, of course. In the United States we have the right to freedom of speech and the press, which pretty much guarantees our right to express what we think. Another common misconception is that the right to express one's opinion somehow equates to the right to expect others to listen to it. This is clearly false; you can scream into the ether of the Internet all you want and you have zero right to expect anything other than silence in response. You also have the right to expect other people to scream back if they don't like what you're saying, but you also have the right to ignore them. They could have exercised their right to ignore you, of course, but if they don't they've got as much right as you do to rant about what they think. You have to deal with it, unless you can delete their remarks or block them or something like that, and even then you have to understand that they are still out there disagreeing with you in spirit, if not in word. If you can't handle that, you probably should get offline and go outside or something.

One of the comments that has been directed at me online is that many of my reviews or opinions are negative and that they are simply part of the overall trend towards criticizing everything rather than enjoying things uncritically. This came up on Facebook, in reponse to a link that I posted to my review of "Green Lantern." Apparently, the thought behind this was that because there are so many negative, critical things said and posted online that all negative, critical things are simply part of a trend and don't represent an individual thought or opinion in and of themselves. This irritated me, because while I do try to keep a light tone and make my review entertaining to read, I really didn't like that movie and I have a number of specific reasons why I didn't. As I said above, the general atmosphere of the Internet caused my personal opinion to be dismissed as part of the background noise of hate and derogatory remarks. Poor little me, right? Not so much; I pointed out essentially what I've said about here and moved on. Interestingly, no one has ever raised an issue with my work when I've expressed a positive opinion about something. I've been told that I'm not qualified to critique something when I don't like it, but apparently when I do like it, I'm a freakin' genius on the subject.

A lot of my frustration grows from a personal disagreement I had with a fellow writer recently. And yes, this is the same guy who said my dislike of the Green Lantern movie was not my own opinion but rather my contribution to some worldwide phenomenon of sadism towards otherwise faultless art forms. I won't say who it was because the argument we were having is beside the point. Many of , the points that he raised, however, bugged me on a different level. It wasn't so much that I felt duly corrected as it was that I wondered why someone would bring up some of these things in the first place. For example, in the course of trying to determine who was right about something, we came to the point of debating which of us was the more committed as a writer. His volume of fiction work is considerably larger than mine, and at the end of the argument he informed me that I only had the right to question his dedication as a writer once I had accomplished at least "half as much" as he had. Interestingly, my volume of professional, paid copy writing far exceeds his volume of writing output in general but what does that actually have to do with anything? People seem to feel no compunction about criticizing the President, for example, regardless of their own personal, educational, or professional qualifications. Qualifications have nothing to do with criticism, otherwise only the most accomplished people would have the right to criticize anyone else's work. By that standard, since the Unabomber was such an educated, accomplished guy we should have all been listening to him.

So, yeah, this may all come off a little snarky now that I admit that it started with a private argument, but there is a bigger picture to see here. I thought about the fact that I savage certain movies, like the "Toolbox Murders" from director Tobe Hooper. Tobe Hooper has accomplished some pretty cool things in his career, like the original "Texas Chainsaw Massacre," for example. Do I have the right to criticize the man? The way I see it, if the man set a high standard for himself and then failed to meet it in his later work, I'm almost obligated as a consumer of horror movies to point that out. This is why all the fan complaints about the more recent "Star Wars" movies have a legitimate place. If we the fans have no right to complain, and to share our complaints, then who does?

I am a writer, and that makes it difficult to know where to draw the line in criticizing other writers. I try to make sure I don't say anything online that I wouldn't say to their face. That's pretty easy, though; there's not a lot that I wouldn't say to someone's face if I felt that it was justified. The other tricky part is worrying about burning bridges professionally. I'm not exactly exposing Watergate, so where do I draw the line between telling the truth and biting my tongue? After all, it would certainly ruin my day to get an e-mail back from an editor sometime saying, "Gee, we'd really like to publish your manuscript and pay you a huge advance, but we hear that you called our best-selling author a talentless hack and a brain-damaged reprobate on Hubpages last year..." Yep, that would sure suck, but I have put myself in the position of critic and I have an obligation to my audience not to cherry-pick things to review about which I can only gush positively without a hint of sarcasm.

If I'm going to write, I have to write what I think is good, not just what might be popular. If I'm going to criticize, I have to speak my mind regardless of the person's work about whom I am commenting. For example, if you really want to hear a bunch of literature nerds lose their cool, trying telling them you don't like "Catcher in the Rye." Been there, done that (not on here, although it's an interesting idea...). I have the right to say it, they have the right to ignore it, and if I really mean it, I have an obligation to say it anyway.

As George Carlin once said, "I have no end for this, so I simply take a small bow." 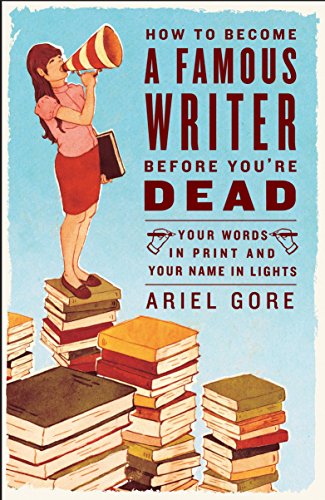 How to Become a Famous Writer Before You're Dead: Your Words in Print and Your Name in Lights
Buy Now