For a small publisher named Atlas Comics, 1961 was a very big year. After a decade of publishing mostly derivative material in a variety of genres, they introduced a new superhero title. The company also changed its name. They were now known as Marvel Comics, and their new superhero title was Fantastic Four.

The Marvel Age of Comics

What followed was a decade-long explosion of creativity that has seldom been rivaled in any medium. Atlas had been merely a minor player, but by the end of the 1960s, Marvel was the dominant publisher in the industry.

This era, which Marvel writer Stan Lee referred to as The Marvel Age of Comics, saw the birth of many of Marvel's most popular characters. Here's a look at some of them.

In 1961, Stan Lee was ready to leave the struggling comics industry. Before leaving, he decided to write one comic the way he felt they should be written. Marvel's best artist, Jack Kirby, illustrated the book, and Fantastic Four #1 (cover date November, 1961), changed everything - not just for Lee and Kirby, but for the entire comic book industry.

The Fantastic Four were a superhero team unlike any that had been published before. They quarreled amongst themselves, and when they weren't battling super-villains, they faced problems like finding money to pay the rent on their headquarters.

One member of the team, the Thing, didn't even want to be a superhero. The accident that had given them their powers also turned him into an ugly, monster-like creature. He just wanted to be normal again.

Perhaps most importantly, the members of the Fantastic Four had distinct personalities. The members of competing publisher DC Comics' Justice League of America differed in powers and appearances, but they all had pretty much the same "standard superhero" personality.

It all sounds like pretty standard stuff today, but in 1961 comics weren't written that way. Obviously, Fantastic Four #1 was a great success, and Stan Lee elected to stay at Marvel and continue writing comics his way.

Members of the Fantastic Four (circa 1961)

If you had super-powers would you use them to make money (legally) or fight crime?

Peter Parker was still in high school when a bite from a radioactive spider gave him super-powers. As a typical teenager, his first thought wasn't to become a superhero, but rather to make some money - which he did, first by winning a wrestling contest, and then by appearing on TV.

During this time, Spider-Man failed to apprehend a burglar at the scene of a crime, when he could easily have done so. When the same burglar later murders Peter's father figure ("Uncle Ben"), the guilt motivates Peter to become a crime-fighter. Spider-Man's first appearance (Amazing Fantasy #15, cover date August, 1962) ends with the now-famous line: "With great power there must also come -- great responsibility."

Spider-Man was created by Stan Lee and artist Steve Ditko, whose quirky artwork was perfect for the character. Ditko's Spider-Man costume was unique in that it featured a mask covering Spider-Man's entire face, which was quite unusual for a superhero at the time.

In typical Stan Lee fashion, Spider-Man's tales bordered on soap opera. Peter Parker had problems with his love life, his finances, and a frail aunt, seemingly always teetering on the edge of death. As far as I know, Spider-Man was even the first superhero to battle a super-villain while also fighting off the flu!

Reprints From the Marvel Age 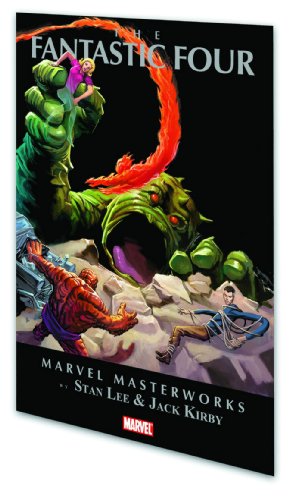 Look! Up in the sky - a strange figure in a colorful costume and red cape! A being from another world, possessing super-human powers!

No, it's not Superman, it's the Mighty Thor. Created by Stan Lee, writer Larry Leiber, and artist Jack Kirby, Thor was the closest Marvel came during this period to creating a traditional superhero.

Thor, whose secret identity was frail physician Donald Blake, is based on the god of thunder from Norse mythology. The strongest of all the Norse gods, Thor controls thunder and lightning, and wields a powerful magic hammer, Mjolnir.

Initially, Thor was mostly earthbound, engaging in typical superhero adventures. Gradually, readers were introduced to Thor's homeworld, Asgard, and the other Norse deities, including Odin (Thor's father, and ruler of Asgard), Balder the Brave, Heimdall (guardian of the rainbow bridge), and, of course, Thor's evil half-brother Loki.

A superhero with a bad heart? Just another example of Marvel's unique approach to the superhero genre.

The rich playboy secret identity was not a new idea (think: Bruce Wayne), but playboy Tony Stark was different. He seemed to be what every man wanted to be - rich, intelligent, and handsome. What no one knew was that Tony Stark lived constantly at the edge of death.

An accident had damaged his heart, and he secretly wore a chest plate of his own design, which kept his heart beating. The chest plate was also part of an advanced suit of armor that enabled Stark to secretly fight crime as Iron Man. Battling super-villains while maintaining Stark's ailing heart often pushed the armor to its limits, however. If a super-villain didn't destroy Iron Man, his own heart might.

Iron Man first appeared in Tales of Suspense #39 (cover date March, 1963), and his earliest adventures were illustrated by Don Heck (an unsung hero of the Marvel Age). Iron Man's armor has been redesigned many times over the years, as Stark continues to integrate the newest technological advances into his armor.

The origin story can be the hardest part of creating a new superhero. In 1963, Stan Lee struggled with this problem while creating new heroes for Marvel. His solution was brilliant: Some people are simply born that way!

These people are mutants, born with a genetic mutation that gives them super-powers. Of course, people fear and distrust those who are different - including mutants. When Professor Xavier (himself a mutant known as Professor X) created a school where mutants could learn to master their powers, he had to do it in secret. Xavier referred to his team of young mutants as the X-Men.

Today the X-Men and other mutant heroes are consistently among Marvel's most popular titles. New characters such as Wolverine and Storm have been introduced over the years, but the essential concepts were there from the very start, when the X-Men first battled Magneto in X-Men #1.

The Avengers were based on the same concept as DC Comics' Justice League: combine existing heroes into a new team book. It was late 1963 before Marvel actually had enough superheroes to do this. The initial line-up consisted of Thor, Iron Man, the Hulk, Ant-Man and the Wasp.

With the rallying cry, "Avengers assemble!", the team faces menaces too big for any single hero to handle. The line-up is constantly changing, but generally consists of a mix of popular heroes who already have their own books, combined with some of Marvel's lesser-known characters.

The Return of Captain America

One of the pivotal moments in Marvel history occurred in Avengers #4 (cover date March, 1964), when the team discovered Captain America in suspended animation. Captain America had been a popular character in the 1940s (especially during WWII), when the company was known as Timely Comics.

Cap joined the Avengers in that very issue, and was the team's leader before long. Cap has been a Marvel mainstay ever since, and is considered by many to be the character that best embodies the spirit of the Avengers.

With the return of Captain America in 1964, the foundation on which the Marvel Universe has been building ever since was complete. Dozens of new characters have been added, but the superheroes created during these early years have only increased in popularity, and they remain at the very heart of the Marvel Universe.