Mary Oliver - The History, Accomplishments And Life Of A Poetic Legend

Mary Oliver was born on September 10, 1935 near Cleveland Ohio in Maple Heights. Her mother was Helen M. V Oliver. Here father was Edward William Oliver. Her education included attending both Ohio State University and Vassar College. Yet, she did not earn a degree. Instead, she went to work. One of her most memorable jobs was for Norma St. Vincent Millay, the sister of the famed American poet, Edna St. Vincent Millay (1892-1950). Oliver then went on to teach at Case Western Reserve University in the 1980s. By 1986, she was “Poet in Residence” at Bucknell University. In 1991, she had moved to Virginia, becoming Writer in Residence. Until 2001, Oliver held the Catharine Osgood Foster Chair for Distinguished Teaching.

Yet it is not her role as an educator that won her the Pulitzer Prize in 1984 or fellowships from the Guggenheim Foundation and the National Endowment for the Arts. It was not because of her teaching ability she was awarded an American Academy of Arts & Letters Award, a Lannan Literary Award, the Poetry Society of America's Shelley Memorial Prize and the Alice Fay di Castagnola Award Christopher Award, the L. L. Winship/PEN New England Award and the National Book Award. She garnered praise and awards because of her poetry.

Mary Oliver is an American poet with many published volumes of work. Since her poems first appeared in 1963 - No Voyage, and Other Poems, Oliver has increasingly become known as the successor to several two particular greats - Walt Whitman and Henry David Thoreau. These authors, together with Edna St. Vincent Millay and Emily Dickinson, have influenced her work. This is particularly obvious when it comes to subject matter.

In a very large sense, Oliver is a naturalist. She has little time for humans and civilization. The constructed world is not of significance. Mary Oliver’s work focuses on the importance of the natural world. On even the most basic of poetic themes, she reminds us that humans do not have exclusive province over the larger context in which they operate. For example, in “The Black Snake” (1979), she explores the universal themes of life and death as they occur when human devices affect the natural world. Her initial focus on the suddenness of death shifts to the physical appearance of the dead snake then ends with 3 stanzas concentrating on a meditation on death.

In her approach to nature, Oliver is almost Wordsworthian. The Romanticism that is often an integral part of Wordsworth and Thoreau are borne to new heights. Yet, she refuses to fall into the trap of the Romantic poets. In her work, nature is neither personified nor idealized. She blends aesthetic appreciation of nature with an understanding of the natural world. It is a world full of life, decay and death. This is obvious in such poems as “The Lilies Break Over the Dark Water” (1990) or “Black Snake This Time” (1997). In “Lilies,” she describes the environment of the water lilies as “that mud-hive, that gas-sponge, that reeking leaf-yard…” It is a perfectly accurate description of the swamp where water lilies prosper.

As a result, it can never be said of Mary Oliver’s poetry that she is using the natural world as a metaphor, simile, cheap poetic device or mechanism. In her poetic world, nature absorbs and consumes all else. Even when she ventures into discussing humans and humanity, the natural world plays a significant role. For example, in “the Buddha’s Last Instructions” (1979), she uses his last words, “Make of yourself a Light” to launch into a rapturous description of the sun.

And then I feel the sun itself
as it blazes over the hills
like a million flowers on fire –
clearly I am not needed,
yet, I feel myself turning
into something of inexplicable value.

In doing so, the poem transcends the mundane and enters the spiritual. While nature remains indifferent to humans and their efforts, it does lead to a sense of self-knowledge. As a result, her work often produces a kind of ecstasy common to such religious poets as Gerald Hopkins (1844-1889).

Mary Oliver is not an American Primitive or a lacramose Romantic. Her poetry celebrates the forces and reality of nature. She writes of death and life and the beauty of nature eternal. Oliver notes its spirit, its silence, its wonders.

Although she revels in the past, there is only a self-realization through the natural world. In “Picking Blueberries, Austerlitz, New York, 1957” (1992), she captures what Wordsworth would refer to as a “spot of time.” There is a wistful note as she recalls the moment when the doe of this poem suddenly awakens her. They stare at one another. This encounter remains forever a moment frozen in time. Mary Oliver recalls it and wonders what has become of this doe she met so many years ago – not what has become of her, Mary Oliver, since this time. 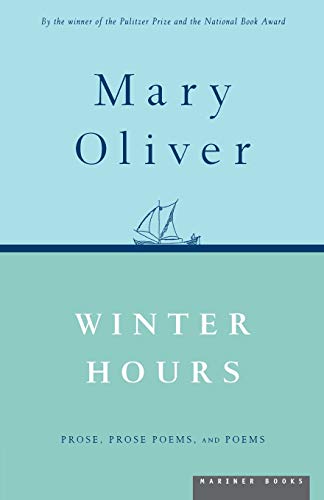